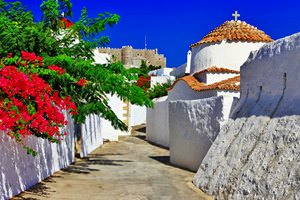 On Patmos, there is something to do besides visiting historical and architectural monuments. For example, you can rent a boat and go on a short excursion along the coastline for the sake of beautiful views and the opportunity to get to the small secluded beaches from the sea at any time. If you want, you can sail to any of the neighboring islands. On Arkoi, you can stroll into a large cave with beautiful stalactites and stalagmites – of course, if you find the entrance in the thickets of olive trees, and then climb up the hill and see a magnificent view of the Aegean islands and see the ruins of the ancient acropolis. Here you can also spend a lot of time on the Tiganiakia and Limnari beaches and even stay for the night. Many yachtsmen like to swim in the water area of Arcoi.
Best beaches and recreation areas around Patmos Island
Skala is the busiest and the noisiest place on the island; there are always a lot of people and a lively atmosphere. There are attractive taverns and bars on its sandy well-equipped beach. …

Open
On the island of Lipsi, you can not only have a bite to eat, but also visit many churches, including the Panagia Harou Temple, built in the 7th-8th centuries, or take a stroll through the cave of Ontas. It is worth to go on Lipsi in August for a festival of wine and a religious festival in honor of the saint patron of the island. Many small uninhabited islets around Patmos are ideal for bird watching.
The island is also suitable for hikers. On the one hand, the nature of Patmos has remained unaffected by the influence of civilization and is truly magnificent, on the other – there are many small settlements, temples, and monasteries, where you can spend the night if necessary and which are very interesting to explore. There are a lot of roads and paths here, so it's easy to get directions and go forward – to enjoy beautiful views of nature. You can also walk on foot to the deserted secluded beaches, where there is almost no one even at the height of the tourist season. Copyright www.orangesmile.com
Top hotels in Patmos Island for business trip or short vacation
Standalone hotels of Patmos will surprise guests with an atmosphere of coziness and national colour. Patmos Aktis Suites & Spa occupying a complex of white stone buildings is considered one …

Open
If you do not want to walk on the island on foot but you want to see as much as possible, then you should rent a car. Note that you need to return the car with the same amount of gasoline, which you had when you took it. Not all rental offices need an international driver's license, the license of your country is often enough. You will not be given a car if you are under the age of 21 and have a driving experience of fewer than 12 months. Strangely enough, renting a car in the company's office can be much cheaper than booking it on the Internet. When signing a contract, read it carefully so you do not have to pay extra, for example, for every kilometer that you passed. Please note that the Greeks are very disregarded for the traffic rules, and therefore here you have to be extremely careful on the roads.

If you don’t want to rent a car, you can travel around Patmos by bike, motorbike or public transport. The latter, by the way, usually goes strictly according to the schedule. Everyone at the bus stop is notified about the arrival of the bus through a special speaker. On the island, you can play basketball, volleyball or football at special venues. In the bays of Patmos, there are good conditions for young yachtsmen, and many divers come here to visit sites in the water area of the island and on the neighboring islands. If you want, you can learn all the subtleties of scuba diving right on the island, there are diving schools here as well.
Guide to Patmos Island sightseeing - things to see and to visit
Patmos is one of the smallest and most attractive islands of Greece. It features amazing religious sites, rocky desert landscapes, as well as incredibly beautiful beaches. Patmos is one of …

Open
For those who like snorkeling and in general a secluded holiday Agriolivadi beach is best. If you want, right from this beach you can go directly to the nearby island of Agia Thekla and swim on the beach there. Meli's beach will appeal to all admirers of soaking up on the sand. It's difficult to get to Geranos but this is probably the most deserted beach of the island. The pebbly beaches of Lambi and Cambos are popular among the travelers. If you want to sunbathe in the nude, then you should go to the southern extremity of Psili Ammos. The fans of noisy parties should keep to the coastline – most of the parties are held right on the beach.

This guide on active recreation and leisure in Patmos Island is protected by the copyright law. You can re-publish this content with mandatory attribution: direct and active hyperlink to www.orangesmile.com.
Patmos Island - guide chapters 1 2 3 4 5 6 7 8

Attractions and entertainment in Greece

Sailing regattas are also popular in Greece. Every year, there are numerous competitions in the country. The most famous is the International Aegean rally. Tourists can enjoy walks on yachts along the coast. You can go to uninhabited islands and beaches. The island of Aegina features amazing views. You can conquer the sea with an instructor, so even those who do not have experience in yachting, can do that. Another activity that is very popular in Greece, is cycling. Trails are quite complex, which is explained by relief diversity. Many routes pass through the mountains, and, therefore, you need to have some training. Mountain bikes are best suited for Parnita, Dionysos, Mani, and Parnassus. Simpler trails run through the island of Crete. … Open

Leros Island
However, even if you do not want to fish, it's worth to rent a boat anyway: Leros looks amazing from the sea and shows its new sides to the travelers. If you want, you can also go to the neighboring islands. For example, to Marathi. Only three people live there constantly, but at the same time, there are two taverns on the island, and a small hotel, and a bar. You can find ... Open »
Ikaria Island
Be sure to climb Mount Atheros. It is located above the capital of the island and it provides stunning views of the island. There are many walking paths and routes on Ikaria. You can go for a walk for a couple of hours or go on a long camping trip for several days. During the trip, you can admire all the attractions, visit small villages, sleep in a tent and enjoy the virgin ... Open »
Kalymnos Island
Do you want to admire the fauna of the Aegean sea but there is no desire to try diving? So, look for a secluded place on the island, buy or rent a mask and a snorkel and go snorkelling. You don’t have to learn anything and good visibility gives you a chance to see different fish species. You can swim on Agios Petros or Emborios which are usually not crowded by tourists. ... Open »
Samos
Those tourists who can not imagine their lives without exciting nightlife entertainments should visit the Corner bar which is located in the city of Pythagoreio. The bar offers its guests a wide assortment of treats and drinks as well as an exciting night program. The most popular nightlife establishment of the capital of the island is the Mezza Volta bar treating its visitors ... Open »
Amorgos Island
Some of the locals are engaged in fishing for many centuries. So, if you are a professional fisherman or you want to try your hand at fishing, you should definitely visit Amorgos. The island is an ideal place for this activity. Moreover, you can ask local fishermen to show you the basics of fishing techniques and teach you all the fishing "ins and outs". You can fish from the ... Open »
Kos Island
The beaches on Kos are very different – there are pebbly and ordinary sandy beaches, and the ones with black volcanic sand. On Paradise, near the Kefalos city, you can go up to the observation deck, and next to Agios Stefanos there is a small island with the ruins of Byzantine fortification, where you can even get by swimming. Another famous beach with the purest water is ... Open »

Guide to your best city break in Patmos Island - popular places for recreation and leisure. Things to do during the day in Patmos Island - attractions, parks, beaches, aquaparks, racing tracks, biking trails or waterski. Recommendations (with addresses, phone numbers and links) where to spend your time in the evening (bars, discos, clubs, etc.). We share some good ideas and the question 'What to do in Patmos Island?' disappears immediately.