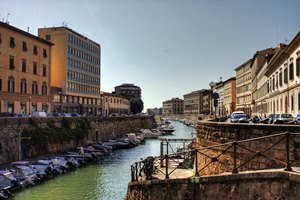 Livorno lost many of its historical monuments during the years of the Second World War. Only a few of them have managed to survive, so locals had to rebuild many sumptuous buildings from the ruins. The old fortress Fortezza Vecchia has been the city's main symbol for almost a thousand years. The first defensive structure was erected on its site in the 11th century. In subsequent 500 years, the fortress has been repeatedly rebuilt and expanded in scale.
Family holidays with kids in Livorno. How to entertain your child, things to show to children.
Livorno has many entertainment centers and attractions that will be interesting to visit with children. Fans of video games will definitely enjoy the entertainment center GamesTime. This …

Open
It has participated in many serious battles and continued to be impregnable. Fortezza Vecchia has retained its original historical appearance by the beginning of the 20th century. During the war, the castle was almost completely destroyed. Its restoration began with the advent of peace and is still ongoing. The fortress is being rebuilt in accordance with historical traditions, which makes it look very impressive. The ancient castle is the venue for many bright holidays and festivals. In recent years, it has been used as a cultural center.
Many other historic buildings are presently occupied by interesting museums and galleries. A luxurious 19th-century villa houses the Museo civico Giovanni Fattori. This villa is one of the few that have managed to survive during the war years. Chic frescoes and other unique design elements have been preserved as well. The museum keeps a collection of paintings by famous Tuscan artists of the 19th and 20th centuries. Many fragments of the old villa's decoration are valuable museum exhibits themselves. The museum is surrounded by a magnificent garden, which is a true oasis of tranquility amidst the busy city streets. Copyright www.orangesmile.com
Cuisine of Livorno for gourmet with top restaurants and cafe
Gourmets will definitely not be bored in Livorno, as the city is famous for its rich gastronomic traditions and a variety of restaurants. In search of local delicacies, be sure to check …

Open
Livorno's most valuable religious monument is the Cathedral of Livorno (Duomo di Livorno) built in the early 17th century. After the war, it was almost completely destroyed and lay in ruins. It took almost ten years to restore the city's main cathedral. It was possible to recreate not only old architectural elements but also unique artistic decorations. Visitors can see frescoes on the ceiling and walls of the cathedral. The shrine was furnished with massive wooden furniture in the style of past years. Now it contains valuable religious artifacts. 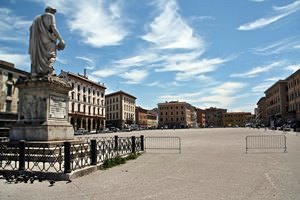 No less interesting religious monument is the church Chiesa della Congregazione Olandese Alemanna, which is considered a true example of the neo-Gothic style. The construction of the church was completed in 1864. Today, the architectural monument is being prepared for a major reconstruction. The church has never been rebuilt over its long history so it has become very dilapidated. Now, for safety reasons, it's not allowed to get inside, so visitors to the city can only admire its external appearance.
Authentic traditions, festivals and lifestyle of Livorno inhabitants
Livorno is an incredibly beautiful city with a rich history and traditions that are embodied in the life of its present inhabitants. Every year, the city hosts dozens of interesting …

Open
Another historical monument that has managed to survive in wartime is Chiesa Di Sant'Andrea. It was erected in the middle of the 19th century in the neo-Gothic style typical of that time. The church was erected on the initiative of the local Scottish community, which lived in Livorno at that time. The chief architect of the project was the famous Scottish specialist Rumball. The church turned out to be completely different from other religious monuments that have been built in the city by that time. Now guests of the city recognize it by the high clock tower, which is visible from many streets. 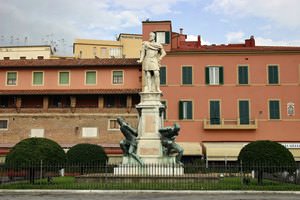 Chiesa di San Giorgio consecrated in 1844 looks very much like an ancient temple. Its entrance is decorated with tall slender columns, this church is considered a vivid neoclassical monument. Since its founding, the main parishioners of the church were Romanian immigrants who founded a rather large community in the city in the mid-19th century. The old church is still functional and often holds divine services. During major religious holidays, beautiful celebrations are organized near the church.
Your active city break in Livorno. Attractions, recreation and entertainment - best places to spend your day and night here
Among Livorno's most popular entertainment centers, it is worth highlighting L’Acquario comunale Diacinto Cestoni, an aquarium named after the famous Italian naturalist of the 17th …

Open
One of the oldest buildings in town is Chiesa della Santissima Annunziata, which is also known under the unofficial name of “Greek Church”. It was built in the early 17th century for Greek sailors who arrived in Livorno to serve. Despite the fact that many years have passed since this important historical event, the nickname of the religious monument remains relevant. The church building is distinguished by skillful facade decoration with preserved old sculptures and stucco elements. The interior of the church is very restrained and elegant. reminding parishioners of the beautiful traditions of past years. The picturesque historic district of La Venezia has also been preserved in Livorno. Besides valuable architectural monuments located here, it is famous for its beautiful canals. The area would be ideal for walks.

In the section below, you can get one of our excursion, activities or city discovery tours over Livorno and surroundings. Our website offers 10-30% lower ticket prices, when compared to the offline purchase on the spot.

This guide to cultural sights Livorno is protected by the copyright law. You can re-publish this content with mandatory attribution: direct and active hyperlink to www.orangesmile.com.
Livorno - guide chapters 1 2 3 4 5 6 7 8
Reference information
Map of all palaces

Public palaces near Livorno
♥   Palace 'Palazzo della Carovana' Pisa, 20 km from the center. On the map

Cathedrals and basilicas near Livorno
♥   Basilica di S. Pietro Apostolo a Grado, San Piero a Grado, 14.6 km from the center. On the map

Photogallery of cultural heritage of Livorno

Excursions over cultural sights of neighbours of Livorno

Pisa
The external appearance of the building present a unique fusion of Byzantine and Muslim traditions. The connoisseurs of architecture will easily distinguish the traits of Gothic style in its look. Another remarkable spot of tourist interest is the monumental cemetery named the Campo Santo. The cemetery was established in 1277 and is of great architectural significance now. The ... Open »
Lucca
The inimitable architectural landmark of Lucca is the Palacco Pfanner which was erected in the 17th century. The majestic building with impressive front side is surrounded with massive stone enclosure, hiding the territory of ultimate beauty. The inner court features a great fountain with magnificent statuary group. During the tour the guests are offered to walk through the ... Open »
Viareggio
Bourbon Villa is a very popular destination for tourists. The beautiful mansion was built in the beginning of the 19th century and is surrounded by a huge park. Several centuries ago, the territory of the park housed lush vineyards. Today the entire territory of the mansion is given to visitors who enjoy unhurried walks on narrow paths and enjoy the magnificence of wildlife. ... Open »
Tuscany
This is the true embodiment of the best traditions of Italian Gothic. The cathedral is striking with fine design of the façade; the interior of is also worthy of the highest praise. The construction of the cathedral was completed in 1263; it has been built on the site of an old church. Siena has been amazing guests with its incomparable appearance for many hundreds of years. ... Open »
Elba Island
Certainly visit Valla San Martino. In the middle of the 19th century, the husband of Napoleon’s niece built a gorgeous gallery near the capital of the island. It still has a whole collection of items associated with the Emperor’s name. The villa itself, which original rooms are located above the gallery, was Napoleon’s summer residence for a couple of years. Villa dei ... Open »
Siena
Among other outstanding monuments of architecture Palace Publico points out; now it houses the city administration. The palace was built in the second half of the 13th century. During its long history, it has repeatedly changed its appearance. The modern building features an amazing combination of different architectural styles; on the facade of the building you can see a lot ... Open »

Culture guide to Livorno. Which fascinating sights to visit once you are in Livorno: temples, churches, museums, theaters and castles. Recommendations (with addresses, phone numbers and links) on the places 'must visit' in Livorno. Plan your own city excursion by using this page info!