Family trip to Leros Island with children. Ideas on where to go with your child 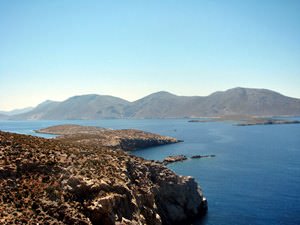 Many monuments of history and architecture of different periods, untouched natural beauty, and a rich choice of options for active pastime – that's what Leros is. The island is not too large, and there are no amusement parks or water parks here. Nevertheless, there are a lot of interesting cultural, historical, and natural objects on Leros that will interest children of any age. For the students who have already begun the world history course, there is an opportunity to witness firsthand the evidence of many major events of the past.
Guide to Leros Island sightseeing - things to see and to visit
The legendary island of Artemis continues to cherish its natural charm and attract travelers from distant lands. Many tourists visit Leros to admire its inherent welcoming and relaxed …

Open
To the north of Alinda, for example, you can climb up with a child to the hill and admire not only the beautiful view but also the ruins of the temple of Artemis. It is not just that: the ancient Greeks believed that the island had long been fond of the goddess of hunting, and the temple itself was inhabited by the sisters of Meleager, whom, according to legend, the inhabitant of Olympus turned into guinea-fowl. For a child, visiting the ruins of the temple of Athena is a great opportunity to immerse in the multifaceted mythology of Ancient Greece.
Lakkion, the island's main port, does not look too ancient. Still – almost all the buildings here were built during the reign of the Italians just before the World War II. Small art fans will like the collection of the medieval icons in the church of Agios Theologos. With a child of any age, you can just stroll through the streets of the city – here you can see the beautiful churches of St. Spiridon, St. Nicholas, St. George, and St. Zacharias. But the most interesting, especially for boys, will be a visit to the military museum, located in the suburbs of Lakkion. During the war, there was the base of the Italian Navy. To the north of the building of the museum, you can see the ruins of an ancient acropolis. Copyright www.orangesmile.com
Cuisine of Leros Island for gourmet with top restaurants and cafe
There are many taverns, cafes, and restaurants in Leros. If you want to enjoy the local cuisine in its original form, without any changes to please the tourists, you should, first of all, …

Open
The capital of the island, the city of Platanos, is much more ancient than Lakkion. Be sure to take your child to the Kastro's castle. It will appeal not only to older children who know about knights from the history books but also to kids who like to present themselves as brave warriors or beautiful princesses. Going up to the castle, look into the uppermost windmill, located on the road to the fortress. There you and your child can see how the real mill mechanism worked in the Middle Ages. The child will be able to feel the spirit of the Middle Ages in the church of Panagia-tu-Kastro, where there are many religious objects of the past. 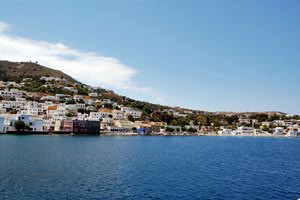 Not far from the village of Alinda, you and your child can visit another castle, Bellini. You should walk through its halls at least because it is the largest museum on the island with a large exposition dedicated to the history of Leros from ancient times to our days. In Bellini, which, although it looks like a real medieval castle, was built in the 20th century, there is also a press museum and an art gallery that young artists will like. The fans of art will also be interested in painting the chapel of Agia-Kioura, which, although not done in accordance with the church canons, is the national treasure of Greece.
Authentic traditions, festivals and lifestyle of Leros Island inhabitants
The Greeks are quite straightforward and sincere in communication. They are emotional, they can touch the interlocutor during a conversation, raise their voice, suddenly start humming …

Open
However, a child in Leros can not only look at the historical monuments and art objects. There are all conditions for snorkeling and windsurfing, and older children can try themselves in diving: due to a large number of the artifacts lying on the bottom of the sea in the water area of ​​the island, it will be interesting to dive even to the experienced divers. Rent a boat and go on a sea voyage around the banks of Leros or to the neighboring Kalymnos, Strogili or Trypiti – for a child, this will be a real adventure. Allow your child to swim and sunbathe on the local beaches, the best of which can be found near Pandeli and Grune.

This guide to family holidays in Leros Island is protected by the copyright law. You can re-publish this content with mandatory attribution: direct and active hyperlink to www.orangesmile.com.
Leros Island - guide chapters 1 2 3 4 5 6 7 8 9

Distance from Leros Island center - 52.6 km.
The Mausoleum at Halicarnassus is the fifth wonder of the world. Its history is closely linked with the history of the temple of Artemis at Ephesus. It was built simultaneously with the second temple of Artemis, which was being rapidly restored after the fire. The building was constructed in an era when Caria was ruled by King Mausolus, so it was named after current ruler. King Mausolus was known for his tough-minded and inflexible nature. During his reign, the city of Halicarnassus was declared the capital of Caria. … Read further

Interesting places to visit with children around Leros Island

Kalymnos Island
Kalymnos is a great place for curious and active children. There are no amusement parks and waterparks, but historical attractions and sports centres will make holidays eventful. For example, teenagers can visit a state diving centre, which is the only one in Greece. There are no doubts that young climbers will love the island. There are different climbing routes on the island, ... Open »
Patmos Island
Among Christians, Patmos is known as the "island of the Apocalypse" – it is here, according to legend, where John the Theologian received the Revelation about the end of times. There are a lot of churches here, and if your child is interested in religion or just likes to look at art, you can visit the Patmos Church Museum, which is located at the monastery of St. John the ... Open »
Kos Island
Kos Island is a good place to relax with children of any age. There is everything to diversify the pastime of both a child and an adult: two water parks, several beautiful beaches with clean water of various degrees of "civilization", a hydrogen sulfide source, monuments of history and Antiquity, and the Middle Ages, and later eras. Add to this a nice climate, close to the ... Open »
Kos
Kos Island is famous not only for its picturesque beaches and natural attractions, but also for the variety of entertainment and cultural centers that are suitable for families. The best water park on the island is Aquatica Water Park, located in Kardamaina. This water park is the largest, and its vast open territory is decorated with living plants. For the youngest visitors, ... Open »
Samos Island
Samos will give your child an opportunity to learn about European history, get to know virgin nature and spend time well. Kerveli is a perfect place for small children. This beach is situated nearby Palekastro village. There is a very slightly sloping, so water near the shore warms up quickly. Moreover, this beach is quite picturesque. If you want to stay alone in a ... Open »
Ikaria Island
Ikaria is a perfect place to introduce your child to the myths and legends of ancient Greece. According to the legends, Icarus, the son of an architect Daedalus, made his fatal fall from the sky during his flight from Crete because his wax and feather wings melted. It is either directly from this legend that the island is called Ikaria and the sea is called Ikarian. Nobody ... Open »

Guide to sightseeing and entertainment for children in Leros Island - parks, attractions, museums, zoos, water-parks. All fascinating and educational sites of Leros Island, which are must visit and see for your child. Find out the best discovery routes and places for kids (local theaters, exhibitions and museums), where you can spend quality time together. Leros Island for families with children.