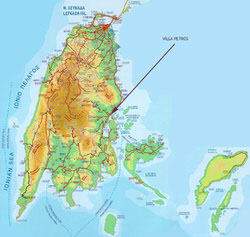 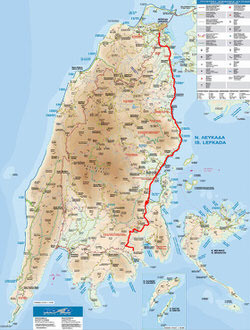 Interactive maps of hiking and biking routes around Lefkada

1. You can zoom in/out using your mouse wheel, as well as move the map of Lefkada with your mouse.
2. This interactive map presents two modes: 'Biking Routes' and 'Hiking Routes'. Use the '+' button on the map to switch between them.

This Lefkada map has two modes: 'Railway Network' and 'Landscape & Rural Map'. Use the '+' button on the map to navigate.

City tours, excursions and tickets in Lefkada and surroundings

Greece is a fairly religious country. Although many modern Greeks have moved away from strict Orthodox rites, religious holidays are celebrated in accordance with all the rules. Along with Catholic Europe, Greeks celebrate Christmas according to the Julian calendar, on December 25. On New Year's Eve, locals go to streets to sing carols. The Christmas bread called Vasilopita is baked. The dough hides a coin, and the one who will find it, will succeed in business all next year. On January, 1, the country celebrates the day of St. Basil or Agios Vasilias, who is considered the patron of good and helper to the poor. The most important religious holiday in the country is Easter. There are colorful processions throughout the country. … Open

Our guide to Lefkada

While in the island's capital, first and foremost, tourists visit one of the local beaches and book a paragliding or sky-jumping tour - this kind of pastime is especially popular in the city. Of equal interest is Alternative Lefkada, a workshop where visitors can learn how to cook like they do in Greece. The House of Smile is another great place in Lefkada where you can have a quality rest. Wonderful massage, spa … Open

Festivals and events in Lefkada

The beginning of the second summer month is marked by the Music Week, which takes place in the island's capital. Chamber music concerts are held in numerous cultural institutions at this time. You can also enjoy opera in theaters. In mid-July, Karya hosts a festival called Riganada. This is another gastronomic festival fully dedicated to such Greek dish as "Riganada". It is a simple snack of bread spread with … Open

6. Regular buses run between cities and villages of the island according to the schedule. It's a good idea for active tourists to rent a car, as this kind of service is relatively inexpensive here. 7. In search of souvenirs and gifts for loved ones, be sure to explore local markets. Here you can buy excellent locally produced olive oil, honey, and other delicacies, as well as handicrafts. 8. The price level … Open

Lefkada beaches are incredibly beautiful, and each one is unique. The most popular beach on the island is Porto Katsiki. It can be found in many tourist brochures and guides. A narrow strip of beach covered with large pebbles is framed by high cliffs effectively protecting the coastal area from the wind. The beach is equipped with sun loungers and parasols, but its infrastructure isn’t rich. You can easily get … Open

Lefkada for children - what to visit

Agios Nikitas - one of the most beautiful villages on the island - attracts tourists from all over the world not only with its sights but also with the fact that walking around it is a pure pleasure. A picturesque bay buried in greenery is a kind of the village's "calling card", therefore it is worth taking a walk along it. On the already mentioned Mili beach, besides practicing kitesurfing, one can also swim, … Open

You can rest far from the noisy tourist atmosphere in the town of Perigiali. This is a very nice little town, located on a hillside. While walking along its streets, you can admire the panoramic view of the harbor, as well as the nearby islands. In this town, there are many beautiful old buildings, in which there are small boarding houses, restaurants of national cuisine and craft workshops currently. The … Open