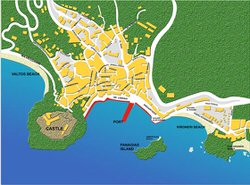 Interactive maps of hiking and biking routes around Parga

1. You can zoom in/out using your mouse wheel, as well as move the map of Parga with your mouse.
2. This interactive map presents two modes: 'Biking Routes' and 'Hiking Routes'. Use the '+' button on the map to switch between them.

This Parga map has two modes: 'Railway Network' and 'Landscape & Rural Map'. Use the '+' button on the map to navigate.

City tours, excursions and tickets in Parga and surroundings

Our guide to Parga

The most comfortable way to reach Parga is to fly to Corfu first. This Greek city has a large international airport that receives many flights from different countries every day. Upon your arrival in Corfu, take a ferry ride to Igoumenitsa. The ferries depart every hour and reach the final destination in one and a half hours. The distance between Igoumenitsa and Parga is roughly forty kilometers. It takes … Open

Maps of Igoumenitsa
Vast majority of bars and restaurants that work at night are located in the territory of hotels. This is very comfortable for travelers because they do not need to waste time searching for a suitable nighttime entertainment. Certainly, some popular bars are open outside hotels. For example, Bamboo Place offers delicious cocktails and mesmerizing sea views. Fragile All day bar ... Open »
Maps of Corfu
Fans of eventful evenings and nightlife should head to the west coast, which is a continuous series of nightclubs and discos. The biggest concentration of popular nightclubs is between the city of Corfu and the resort village of Gouvia. These places are considered to be an ideal spot for young travelers. The island's most famous nightclubs such as Ekati and Corfu by Night can ... Open »
Maps of Corfu island
First of all, there is Liston Street. Every evening you will meet hundreds of tourist of different age here. Those, who travel alone, couples in love, families with children, a couple of friends – everybody will find just the right place to go on Liston Street. Do you want good food and folk dances? Then go to buzuluk – a type of a tavern, where they have live music and ... Open »
Maps of Lefkada
Most nightlife facilities are concentrated in the island's capital. So, while in Lefkada City, it's worth visiting Sea To See bar offering magnificent sea views, Joy Bar with its excellent selection of strong drinks and cocktails based on them, as well as Taratsa Open bar with its warm family atmosphere, thanks to which you can meet new friends or improve relations with the ... Open »
Maps of Ithaka Island
You can rent a boat on Ithaka and go to nearby Arcoudi. The island is uninhabited now, but it was owned by the wealthy European people in the past. Their gorgeous mansions are still on the island, but they are almost destroyed by the time. Arcoudi had a name of Asterida in the past and scientists believe that Homer described this place in «Odyssey». But there is no real ... Open »
Maps of Kefallonia
In Argostoli, there is also a place for relaxed leisure, thanks to which you can recharge batteries to move to an active pastime again later. Such spa centers are Kefalonia Massage Christina and Alexandra Kefalonia Massage. Of great interest are workshops held in Sea Rock ws where one can learn how to cook like a Greek. In Akri Seaside Bar, which is located in the village of ... Open »
Maps of Zakynthos Island
The nightlife on the island is most active in June-October when the flow of tourists increases. However, you can sit peacefully in a tavern somewhere in the center of Zakynthos and look at the evening dance program at any time. In summer, the noisiest and fun parties until dawn are held where the majority of tourists are – in Argassi, Tsilivi, Laganas, Alykes, and ... Open »
OrangeSmile.com - online travel reservation expert providing reliable car rental and hotel booking services. We feature more than 25.000 destinations with 12.000 rental offices and 200.000 hotels worldwide.
Secure Server