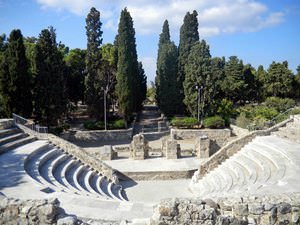 Going to the island of Kos, travelers should definitely find out more about local rules of etiquette; they are quite simple and can help to find common ground with natives. Entering to a public institution, shop or restaurant be sure to greet all those present. You have to answer on greetings; at the same time shaking hands with strangers is not accepted. Locals welcome travelers who are trying to communicate in Greek with a great respect.
Shopping in Kos - main shopping streets, outlets and boutiques
While on Cos Island, modern ladies of fashion should definitely visit Anna Riska, a store exclusively for women. Here they can buy literally everything, from luxurious lingerie and swimsuits …

Open
If you greet a seller on a market or in a store in his native language, you can reckon on a good discount and promotional gifts. During conversation locals are actively using hand language and a dialogue between two friends can recall a heated argument or quarrel. In fact, there is no aggression in gestures; their main task is to help to express emotions, but not to threaten the interlocutor.
When interacting with new acquaintances, locals often use interjections referring to companions. Such treatment also shouldn’t be considered an insult or a sign of disrespect, it's just one of the features of national culture. Kos is an island with a rich history, it has a lot of interesting symbols. Copyright www.orangesmile.com
Guide to Kos sightseeing - things to see and to visit
Kos is a beautiful town and a magnificent beach resort that has gained popularity among European and American travellers within just several decades. Old buildings were fully destroyed …

Open
According to historical data, 2.5 thousand years ago on the island great physician Hippocrates was born. Here, he founded his first school; the famous plane tree is one of the major attractions and the undisputed symbol of Kos. It’s not easy to find a famous tree, so all travelers wishing to have a trip on their own are offered to buy a special map. 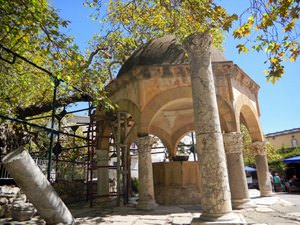 The most popular memorable gift to travelers is the Hippocratic Oath, you can buy it in every souvenir shop. Oath is written on small scrolls, to which the world-famous plane tree leaf is attached. It is also worth mentioning that you can find oath written literally in any language in local souvenir shops. Subject of healing is predominating on the island. Travelers say that here there is a truly unique healing atmosphere; many of them visit the island in hope of just getting rid of diseases.
Family holidays with kids in Kos. How to entertain your child, things to show to children.
Kos Island is famous not only for its picturesque beaches and natural attractions, but also for the variety of entertainment and cultural centers that are suitable for families. The best …

Open
One of the island's holidays is dedicated to the "Father of Medicine". The most interesting events are organized in the capital of the island. The open-air festival's program includes not only musical and dance performances but also art exhibitions and theatrical shows recreating scenes from the life of Hippocrates. During the festival, thematic excursions are organized to the Tree of Hippocrates - if what is said is true, it was here that the Father of Medicine taught his successors. The colorful event takes place throughout August. Those visiting the islands at this time will never get bored. 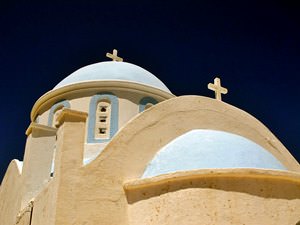 In the same period, that is, throughout the hot month of August, the Wine Festival is traditionally held. On weekends, winemakers present their best varieties of the drink to the public. The event is held throughout the whole island in the central streets and parks of this or that city. Only two cities stand apart: Kefalos where visitors to the local festival can taste fresh fish and Antimachia where the role of the “hero of the occasion” is given to traditional honey. In addition to fairs, musical and theatrical concerts are organized. Restaurants and cafes join the celebration by offering a special menu, all the cities are enveloped in a fiery atmosphere - no event can do without public festivities.
Cuisine of Kos for gourmet with top restaurants and cafe
Restaurants of national cuisine predominate on the island, but fans of the exotic can easily find a suitable gastronomic place. The attractive Brasosca Fish Taverna restaurant offers a huge …

Open
Not only the legends about Hippocrates but also the myths with the participation of Hercules are associated with Kos. The fact is that the island was first mentioned in legends about the wanderings of the ancient Greek hero. After the victory of Greeks in Troy, it was here that he saved himself from the wiles of jealous Hera who had sent a huge storm to the strong man. Having gained strength here, he continued on his way, but local people will forever remember that the son of Zeus once visited their homeland. The islanders are very proud of the fact of visiting the island by the legendary hero - several temples are erected in honor of Hercules here. 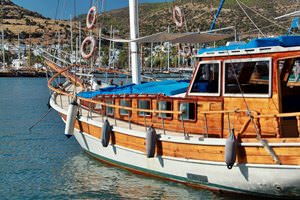 All the locals are avid Orthodox Christians, so religious holidays are very widely celebrated on the island. One of the most revered holidays is Easter, which usually takes place in April. On April 23, the island traditionally celebrates a holiday in honor of St. George who is considered the patron of soldiers and farmers. The feast day of the Assumption of Mary that falls on August 15 is considered to be no less significant in the Orthodox tradition of Kos. The old Greek festival Panigiri is celebrated throughout the island on September 8. Traditional religious services, parades, prayers - all this can be witnessed during Orthodox holidays.

This guide to traditions and festivals in Kos is protected by the copyright law. You can re-publish this content with mandatory attribution: direct and active hyperlink to www.orangesmile.com.
Kos - guide chapters 1 2 3 4 5 6 7 8 9

City tours, excursions and tickets in Kos and surroundings

Survived castles around Kos
♥   Castle 'Nerantzia Castle' Kos, 0.3 km from the center. On the map

Colors of Kos in photos

Traditions and festivals in cities around Kos

Kos Island
You should better not wear provocative clothes on the streets of the remote villages. Though in large cities everyone is used to changing morals, in the suburbs such a look can cause disapproval of the locals. They do not like to hurry here, therefore, sometimes you will have to wait for your order, especially in taverns. What is interesting is that the locals love money, ... Open »
Bodrum
Visiting Bodrum in early September, you can witness such a musical event as Sunsplash. The international event is fully dedicated to dance and club music. Despite the fact that the open-air festival is held on Zuma Beach, it is not a large-scale event, and therefore, it's better to think about tickets in advance, if there is a desire to attend Sunsplash. Be sure to take care ... Open »
Kalymnos Island
Kalymnos is filled with relaxed atmosphere. Even real workaholics come here and forget about all problems. It happens because most of the Greeks don’t like to work hard and get money at all costs. Money is not important for the Greek people. Even if a Gree gets a large sum of money, he will easily spend it on a beautiful and useless thing or an evening in a tavern. Locals ... Open »
Leros Island
In many respects, the hospitality of the local residents is dictated by the notion of honor, preserved by the Greeks to this day. Though the notion that it is not good to deceive the neighbor, and the word must be kept and the obligations fulfilled first of all affects the family and friends, the overwhelming majority of the local residents also treats travelers openly. In ... Open »
Tilos Island
The island inhabitants are quite open and emotional. It’s a common thing here if you meet two Greek men having a heated discussion, using lots of gestures and interrupting each other. It might seem like they are arguing about something, but actually, it’s just what any normal conversation on Tilos Island looks like. Greeks can discuss in this way not only politics or ... Open »
Patmos Island
The The Greeks are great patriots of their country, although they like to criticize the government and the politicians. Never agree with such criticism: if a local resident hears from you the confirmation of his own words, he will probably be offended. Greece can be scolded only by the Greeks. If you want to ear someone’s sympathy, then you should praise the country, the ... Open »

Cityguide on traditions, mentality and lifestyle of people in Kos. Learn the best periods to visit Kos to discover its soul - authentic festivals, events and celebrations. We will also reveal the interesting habits, attitude towards the world and to tourists in Kos.