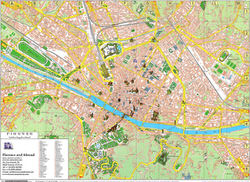 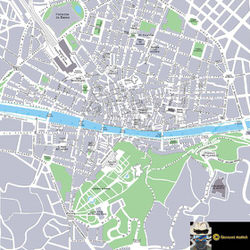 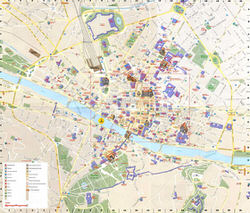 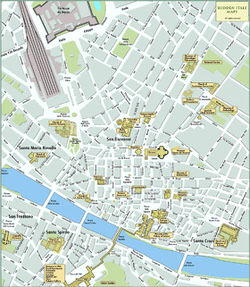 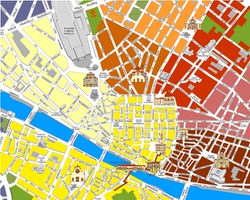 Interactive maps of hiking and biking routes around Florence

1. You can zoom in/out using your mouse wheel, as well as move the map of Florence with your mouse.
2. This interactive map presents two modes: 'Biking Routes' and 'Hiking Routes'. Use the '+' button on the map to switch between them.

This Florence map has two modes: 'Railway Network' and 'Landscape & Rural Map'. Use the '+' button on the map to navigate.

Our guide to Florence

Galleria dell’ Academia is the place where visitors will find a unique collection of world-famous works by Michelangelo. The famous statue of David is also exhibited here. Get ready to stand in a long queue before you get a chance to view the treasures of the world culture, but, you can be sure, your suffering will be repaid by a hundredfold. All works of art exhibited here are the originals. … Open

True connoisseurs of luxury will not have to waste much time, searching for a suitable place to stay as there are many posh hotels in Florence. The historic part of the city is the location of the luxury Relais Santa Croce by Baglioni. This hotel is open in an 18th-century building. Every element of décor is a genuine antiquity there. Guest rooms and public spaces feature unique collections of historic furniture, … Open

Florence for children - what to visit

In the immediate vicinity of Florence you will find the magnificent Pinocchio Park, which is oriented on children of different age. Besides a wide choice of rides and playgrounds, which can be found in all parks of this type, there is a beautiful Fairytale house for babies and Marionette Theatre, a visit to which will be certainly liked by older children. During their stay in the park, children can try on and make … Open

Hotels with unique design are not rare in Florence. Room Mate Luca is very popular with travelers. This hotel is located in the very center of the historic part of the city, where it occupies a 19th-century building that was completely restored in 2013. Travelers are offered to stay at spacious rooms made mostly in white and red shades. The decor of public spaces is made with dominating black and white shades and is … Open

In romantic Florence, there are interesting shopping places for everyone. The real landmark of the city is the San Lorenzo covered market, which has leather, clothing and accessories of the highest quality for sale. For many years, local tanners present their masterpieces here. Charming ladies' and stylish men's bags, chic wallets and belts, jackets and gloves are just some of the things you can buy in this historic … Open

Hotels with history of Florence

A magnificent historic hotel, Bernini Palace offers its guests to relax in the inimitable atmosphere of the past. The hotel is located close to the cathedral and occupies a stylish 15th-century building. Its magnificent interior is worth the highest praise. The antique furniture made of elite sorts of wood, Murano glass chandeliers, ancient tapestries and canopy beds in guest rooms – one can infinitely admire the … Open