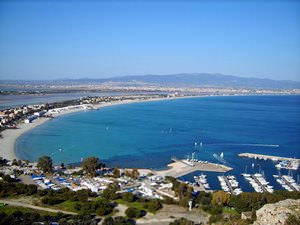 The Roman amphitheater is considered the most famous historical monument of Cagliari. This magnificent building was constructed in the 2nd century BC. The amphitheater is a truly unique facility not just because of its impressive age, but also due to the peculiarities of its architecture. The huge amphitheater of a round shape was carved from a solid limestone massive. Two thousand years ago this was the location of gladiator fights and drama performances. St. Mary Church is another interesting building that is worth visiting. The construction of the church started in the 13th century, and it was completed only in the second half of the 17th century. This is a prominent landmark that combines several styles and is distinguished by luxurious interior. In the halls of the church visitors can see beautiful pictures of famous masters of the 13th century, interesting sculptures and antique church items.
Guide to Cagliari sightseeing - things to see and to visit
Once Cagliari was a large base of marine military forces. It was conquered by the Spanish and Pisa troops, and during the times of World War II the biggest part of the city was turned into …

Open
Archaeological Museum has the full right to be called the most interesting cultural institution of Cagliari. The halls of the museum exhibit items from different eras, starting from prehistoric times to late Middle Ages. Collections of pottery and glass, jewelry of incredible beauty, ancient sarcophagi and art - all these priceless treasures are collected in one large-scale museum.
The bastion of San-Remi is usually considered the obligatory part of the majority of excursions because the terrace of the bastion features tremendous panoramic views of the city and its suburbs. The bastion has become a regular venue for various cultural events, so visitors can easily become witnesses of theatrical performances or art exhibitions. Copyright www.orangesmile.com
Family holidays with kids in Cagliari. How to entertain your child, things to show to children.
Cagliari is a popular beach resort which many travelers with children choose for recreation. The most popular beach for vacationers with children is Poetto. This spacious sandy beach is very …

Open
Fans of art should not forget to visit Municipal Art Gallery, which is located near the abovementioned Archaeological Museum. The halls of the gallery are decorated in a unique style and in addition numerous old paintings the gallery exhibits a rich collection of historical artifacts. During an excursion here travelers will have an opportunity not only to evaluate talent of medieval painters, but also learn many interesting facts about the city. 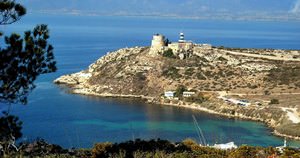 Sanctuary of Our Lady of Bonaria is an important religious site, the construction of which took place during the siege of the city in 1325. The monastery houses an important religious shrine - the statue of Madonna made of wood. This sacred artifact is connected with many interesting legends. According to one version the statue was found on the coast by fishermen. This significant event took place in 1370. The beautiful statue was moved to the monastery. Since then Madonna has been considered the patroness of sailors and residents of Cagliari.

In the section below, you can get one of our excursion, activities or city discovery tours over Cagliari and surroundings. Our website offers 10-30% lower ticket prices, when compared to the offline purchase on the spot.

City tours, excursions and tickets in Cagliari and surroundings

This guide to cultural sights Cagliari is protected by the copyright law. You can re-publish this content with mandatory attribution: direct and active hyperlink to www.orangesmile.com.
Cagliari - guide chapters 1 2 3 4 5 6 7 8 9

What to visit during two-day excursion in Cagliari

Cathedrals and basilicas near Cagliari
♥   Basilica Sant’Elena Imperatrice, Quartu S. Elena, 6.5 km from the center. On the map

♥   Concattedrale San Pantaleo, Dolianova, 19 km from the center. On the map

♥   Concattedrale di S. Pietro Apostolo, Terralba, 69.5 km from the center. On the map 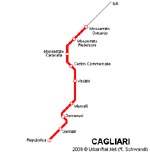 Photogallery of cultural heritage of Cagliari

Excursions over cultural sights of neighbours of Cagliari

Alghero
The indigenous people used limestone and sandstone to build their houses. Besides fragments of ancient buildings, visitors can see elements of old walls and other constructions. There were large port towns here yet during the prehistoric era. During the excavations in the area, archaeologists found fine ceramics, amphorae, and bronze bars. Later, ancient Romans built many ... Open »
Ajaccio
The Old Town part of the city has the greatest interest for tourists. Start your observation of the city’s points of interest from visiting Foch Square. The square is surrounded by beautiful old buildings. This place is genuinely liked by people who enjoy walking as picturesque cobbled streets are simply ideal for this kind of pastime. While walking through the square, you ... Open »
Aegadian Islands
It is important for all Italian inhabitants to save face no matter what they are doing. In Italian, this principle is called bella figure. It is translated as «the beautiful figure». Italians love to attract attention and they sometimes behave theatrically. They believe that life is a theatre and all of the people are actors. Locals have several roles in life: a son, a ... Open »
Favignana Island
The lifestyle of Favignana inhabitants hasn’t changed a lot since the times when people explored the world by boats and electricity seemed impossible for humans. In fact, local settlements haven't changed since medieval times. There are still narrow intertwining streets which were built in order to puzzle enemies. There are still small cosy houses which bricks remember ... Open »
Trapani
One of the most notable landmarks of the 17th century, Cathedral of San Lorenzo is another must-visit place. When describing the oldest buildings in Trapani, it is important to mention Church of St. Francis of Assisi. This church dates back to the 13th century and is famous for an important historic artifact – an ancient tombstone with inscriptions in Latin and Armenian. ... Open »
Corse
Filitosa Historical Park is a landmark of world importance. According to scientific data, the first settlement there was founded more than eight thousand years ago. Large selection of sites is offered by the island's capital, the city of Ajaccio. Tourists have to visit Foch square and to see beautiful buildings located next to it. The house-museum of Napoleon Bonaparte, the ... Open »

Culture guide to Cagliari. Which fascinating sights to visit once you are in Cagliari: temples, churches, museums, theaters and castles. Recommendations (with addresses, phone numbers and links) on the places 'must visit' in Cagliari. Plan your own city excursion by using this page info!