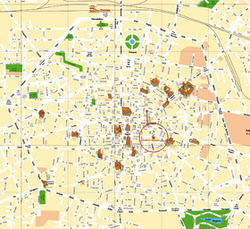 Interactive maps of hiking and biking routes around Bologna

1. You can zoom in/out using your mouse wheel, as well as move the map of Bologna with your mouse.
2. This interactive map presents two modes: 'Biking Routes' and 'Hiking Routes'. Use the '+' button on the map to switch between them.

This Bologna map has two modes: 'Railway Network' and 'Landscape & Rural Map'. Use the '+' button on the map to navigate.

Our guide to Bologna

Bologna is a modern city that tenderly keeps its traditions and so here you will find large number of magnificent medieval masterpieces almost in their original condition. Actually, whole city looks like a medieval one. Approximately in the beginning of the 20th century Bologna was surrounded by a huge wall around six meters in diameter and made of bricks. So what Bologna is like? You’ll find there twelve … Open

Bologna is famous for a huge number of old buildings and unique historic sites, each of which is connected with a huge number of interesting mysteries and legends. San Sepolkro Church is a famous landmark of the city. It was built in the beginning of the 11th century. The walls of the church still keep numerous religious artifacts, which attract thousands of pilgrims, who come here every year to see the sacred place. … Open

Besides observing the city's attractions, tourists are welcome to make their rest more interesting and varied by visiting leisure centers, shops and trendy clubs. In Bologna you will find truly excellent facilities for sport and active rest. Golf Club Bologna is a great place where you can spend some really amazing time. Here beginners will be able to get a couple of lessons provided by experienced coaches, and … Open

The opening of the pub Corto Maltese took place in 1998. Starting from that time the pub has become a favorite place of rest for both locals and tourists. Here visitors will find as many as two hundred kinds of alcoholic beverages, a rich selection of original appetizers and three beautifully decorated halls. The pub is always distinguished by a cozy atmosphere and relaxing music that never stops there. Corto Maltese … Open

Traditions and mentality of Bologna

Arriving in Bologna, the first thing that tourists usually pay attention to is the kindness and responsiveness of local residents. Local people never refuse to help, if this is in their power. They always treat one another with understanding, being known for the ability to keep any conversation. Don't be surprised by the fact that everybody talks to you here, even strangers. It is also customary to greet everyone - … Open

A fascinating monument is Aldrovandi Villa; it was built in 1761. In the mid-19th century villa has been completely restored, today it is completely free to visit and to evaluate its amazing interior. Within the walls of the villa is preserved a collection of antique furniture and works of art, and part of the historic villa is converted into a museum. Among its most unusual exhibits a collection of old toy … Open