Detailed hi-res maps of Ferrara for download or print 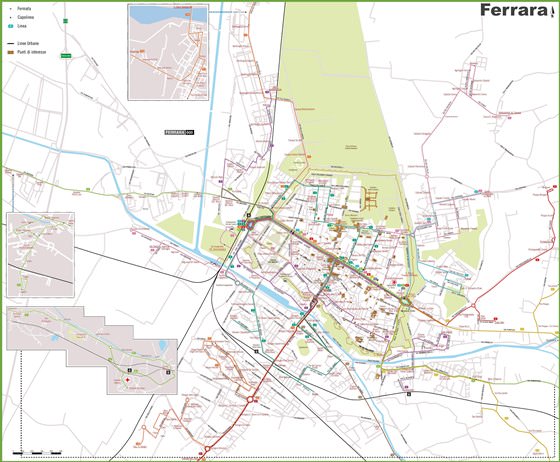 The actual dimensions of the Ferrara map are 4230 X 3486 pixels, file size (in bytes) - 1823992. You can open this downloadable and printable map of Ferrara by clicking on the map itself or via this link: Open the map.

Search for services, infrastructure and sights on map of Ferrara

Our guide chapters over Ferrara

The Ducal Palace is one more attraction in Ferrara that tourists enjoy visiting. This palace occupies a large area in the heart of the city. This palazzo has a bridge that connects it to another prominent architectural landmark, the Castello Estense. This complex is a true pride of Ferrara. The Castello Estense or “Este Castle” was erected in the 40s of the 13th century. From the beginning, this was a property … Open

Maps of Bologna
The birthplace of Guglielmo Marconi hosts two festivals dedicated to the cinema. The first one is held in April and is called Future Film Festival. As you could guess from the name, the event is focused on animation movies and new technologies. The second one is Il Cinema Ritrovato taking place in the middle of July where you can watch rare and little-known films. At this ... Open »
Maps of Modena
In December, Modena prepares for celebrating Christmas and New Year. In the last month of the year, the traditional Superzampone Festival is held. It always takes place in the old Rangone Castle that turns into a big culture center at this time. In the castle, music and theatrical performances are held. You can also visit fairs and a traditional antiques market. The most ... Open »
Maps of Vicenza
On September 8, the central streets of the city are decorated with flowers, and people in colorful clothes are walking all around. This is how people in Vicenza celebrate the feast of the patron saint of the city (Festa della Madonna di Monte Berico). Despite the fact that the holiday is of religious origin, everyone is having fun. A special program for children is prepared ... Open »
Maps of Verona
Another event that often comes to mind when mentioning Verona is known as Arena di Verona Festival. Despite the fact that it is believed that the opera is boring, the event will surely convince even the most skeptical critics otherwise. Firstly, it is a grandiose show and entertainment, for which you should definitely attend Arena di Verona. Secondly, the beauty of the arena ... Open »
Maps of Venice
Watching numerous colorful fireworks in Venice may seem a beautiful dream. But on November 21, this dream comes true within the framework of the Venice Salute Festival. This event symbolizes cleaning the city from the ferocious plague epidemic. Between the Grand Canal and the Church of Santa Maria della Salute, you will find an improvised bridge of boats, along which pilgrims ... Open »
OrangeSmile.com - online travel reservation expert providing reliable car rental and hotel booking services. We feature more than 25.000 destinations with 12.000 rental offices and 200.000 hotels worldwide.
Secure Server