Preparing your trip to Arezzo: advices & hints - things to do and to obey 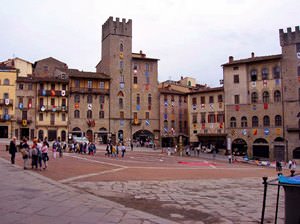 1. Local people are not very skilled in foreign languages, so it is better to buy a phrasebook before your holiday in Arezzo.
2. Line voltage is 220V. Therefore, it’s important to check your electrical appliances that you plan to take and get a European plug in case of a need.
3. As a rule, all religious landmarks are open for visitors starting from early in the morning. Closer to the noon, the majority of churches and cathedrals close and resume their work in 2 – 3 hours.
4. It is not recommended to plan an excursion to churches and cathedrals on religious holidays and during ceremonies.
5. Cigarettes are sold in specialized kiosks only. It is prohibited to smoke in public places, railways stations, and bus stops. Tourists should also pay attention to signs that prohibit smoking in certain places. Copyright www.orangesmile.com
6. If you plan to rent a car, don’t forget about the speed limit on the streets of the city. During the daytime, some streets can be closed for vehicles.
7. The city has quite an unusual law concerning cash turnover. It is prohibited to transfer cash in amounts exceeding 12,000 euro. It is considered a crime and can cause punishment. All transactions involving large amounts of money must be made through the bank.
Old hotels keeping the history of Arezzo
Many popular hotels of Arezzo are set in restored historic buildings, thus former has managed to preserve unique atmosphere of the past centuries. Luxurious Hotel Continentale is in a couple …

Open
8. Despite the fact that the majority of cafes and restaurants include the service fee in the bill, it is recommended to leave a small tip for the waiter. The tip of 10% - 15% of the total is enough.
9. Prior to booking a hotel room, check the services offered. In some hotels, the breakfast is not included in the room price.
10. The cheapest way to make calls to other countries is to use special orange cabins that are present in every district of the city. They offer the most favorable fee and comfortable service. To make a call, you will need to purchase «scheda telefonica» card, the value of which can range from 5 to 20 euro.
11. Arezzo has a well-developed system of public transport. It is possible to buy tickets in tobacco and newspaper kiosks, and in some bars. Bus drivers do not sell tickets.
12. Shops and shopping centers work from Monday till Saturday. Some shopping complexes can have shorter operating hours on Saturday.

Preparing your trip to Arezzo: advices & hints - things to do and to obey You can re-publish this content with mandatory attribution: direct and active hyperlink to www.orangesmile.com.
Arezzo - guide chapters 1 2 3 4 5 6 7 8 9 10 11 12 13

What to visit being in Arezzo - unique sights

Distance from Arezzo center - 46.2 km.
The Cathedral was built in the 13th century but even now it adores people not only with its magnificent external view but also with the inner black and white marble decoration. More than that, there was saved an old library. Thanks to that, every visitor can see a Bibliotheca of the unique handwrites and rather rare books. Fort Santa Barbara is one the most popular relaxation places of tourists. This huge strengthening structures were built in the middle of the 16th century and saved the city from the enemies. Today on the territory of the fort has placed an unusual theatre. In warm seasons there are holding outstanding open-air plays. … Read further

Distance from Arezzo center - 46.4 km.
The town isn’t only famous for the historical buildings but also there has placed a unique natural and cultural landscape Val d’Orcia. The main speciality of this area is the wonderful hills of right bell-mound. In summer they are covered with high green grass and wildflowers. Nice hills attract a lot of artists for hundreds of years. The best way to explore the city is on foot. Walking will open you a lot of secrets that are covered by the car travellers. During the walk around the square, you will see that the old buildings look different from various sides. … Read further 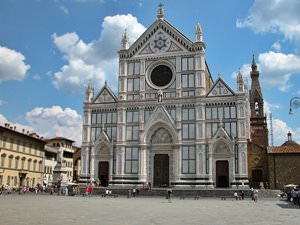 Distance from Arezzo center - 58.7 km.
During the excursions around the Basilica di Santa Croce you can see shrines of famous 19th-century Italian poet Ugo Foscolo, the composer Gioachino Rossini, philosopher Niccolò Machiavelli and other notable people of culture and art. All in all, the church has 300 shrines and each is decorated with an informational nameplate and sculptural composition. In 1966 the Basilica was drastically destroyed from the flooding and some old artefacts were damaged. The most mysterious artefact of the church is the Taddeo Gaddi fresco’s “The Last Supper”. It was made in 1333 and is decorating one of the frater’s wall. This fresco is coved by a number of legends and unbelievable fictions. … Read further

Tips for the cities around Arezzo

Siena
4. The most favorable time for a trip to Siena is from May to September; it is extremely warm and sunny in this period of time. Holiday-makers should take into account that quite a lot of tourists visit the city in summer, so it is recommended to book a hotel room in advance. 5. The city has a good public transport system. Small Pollicino buses cruise the streets from early ... Open »
Perugia
4. Tourists looking for active traveling through the city by public transport and visiting the city suburbs will make use of the Viva Perugia leaflet. It presents all the routes of city and suburban transport. A cost of a leaflet is 1 Euro. It can be bought in any of the tourist information centers of the city. Prudent tourists should better buy a single pass for 10 trips as in ... Open »
Florence
4. It’s normal to leave a tip in the restaurants and cafes. The usual amount of tips is around 10% of the bill. 5. from 14.00 to 15.30 is siesta. The majority of shops and restaurants are closed during this period. It is also not recommended to make phone calls during this time. 6. Tourists with children and young people should be careful when buying tickets to ... Open »
Tuscany
4. Travelers are strongly recommended to exchange currency before the trip; in this case the terms would be more favorable. Despite the fact that the number of banks and exchange offices in Tuscany is very large, a very large fee is charged for currency exchange. 5. Travelers who have limited time and want to see main attractions should definitely use service of City ... Open »
Ravenna
4. Remarkable sites of Ravenna are located in close vicinity to each other so the city is recommended to cruise on foot. 5. A popular transportation means in the city is a bicycle which can be rented in one of specialized renting centers. Local residents ride red bicycles meanwhile tourists commonly ride yellow ones, a usual rent rate is about 10 Euro per a day of usage. The ... Open »
Lucca
4. Numerous rental centers make it easy to get a two wheel vehicle. The best rental centers are considered to be Poli and Cicli Bizzarri set close to the Santa Maria square. These centers offer the most profitable lease terms. The most expensive way to lease a bicycle is from the rental centers located on the territory of the hotels. 5. Travelers giving preference to taxi ... Open »

Travelling to Arezzo - advices and tips. What should be provisioned in advance, the rules you might want to follow, and the things you better avoid doing in Arezzo. We help you to make your trip smooth and easy, with no unexpected surprises.