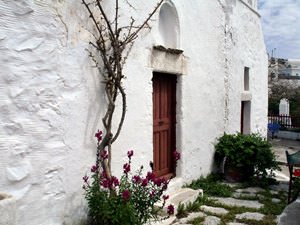 Amorgos became widely known in the height of Hellas. There are 3 independent city-states on the island, they are Minoa, Arkesini and Aigiali. The fact is that the island has a strategically advantageous location and there is a fertile soil on Amorgos. The island has been occupied by archaeologists for several decades because of a large number of ancient historical items here. The most exhibits were sent to the museum in Athens, but some of the items are still on the island. The scientists believe that the first settlers appeared on Amorgos in the prehistoric era.
Family holidays with kids in Amorgos Island. How to entertain your child, things to show to children.
Active and curious children who don’t want to spend time at the hotel or on the beach will definitely love Amorgos Island. There are not many water parks and amusement parks on the …

Open
The tower of Gavras is a perfect place where you can get acquainted with the work of archaeologists. The tower is situated in the capital of the island, Amorgos. It is an amazing monument of Venetian architecture built in the 16th century. There is an archaeological museum inside the building. The museum’s collection is rich with weapons, armour, tools and household items of ancient settlers and residents of city-states: Byzantines, Venetians, Turks and recent ancestors of modern Greeks.
There is a gorgeous ancient monastery of Panagia Hozoviotissa not far from Chora. It was built in far 1088 by the order of Alexios Komnenos. The monastery was built in order to protect an icon. The icon is still in the building and it is opened for visitors every day. Moreover, there are various ancient exhibits in the monastery. But tourists should be dressed decently to enter the monastery. Copyright www.orangesmile.com
Cuisine of Amorgos Island for gourmet with top restaurants and cafe
There are many taverns on Amorgos and they are always full of people, despite the fact that Amorgos is not the most popular touristic island in Greece. Taverns are very popular among local …

Open
Amorgos is an ideal place for those who want to walk and enjoy ancient Cycladic architecture. Amorgos, Katapola, Aigiali, and Arkesini were founded in ancient times and almost hadn't been reconstructed. You can find houses and churches, built several hundred years ago and walk along the narrow streets. The streets look like a labyrinth. They were constructed in order to puzzle enemies. 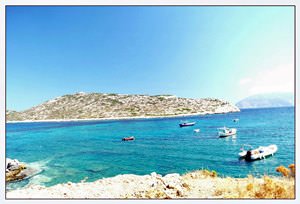 Be sure to visit Katapola and admire the remains of Minoa city-state. Once quite a powerful port city in ancient Hellas comprised a rather large territory and was influential enough to fight for power with all neighbouring settlements. Unfortunately, the fall of Greece, and later the destruction of the Roman Empire affected Amorgos. Some of the settlements including Minoa were abandoned and destroyed because of time and weather. Archaeologists still find here different artefacts of bygone eras.
Authentic traditions, festivals and lifestyle of Amorgos Island inhabitants
Amorgos is filled with relaxed atmosphere. Greeks can be hardly called workaholics. They try to make the most of life and enjoy every moment. It is not customed here to work hard, if a Greek …

Open
You should definitely visit Panagia Katapoliani church in Chora. It was built on the foundation of an ancient building - the temple of Apollo. The Church is made in the true Cycladic style and it is an architectural masterpiece. Arkesini village is a place where you can see how people lived on Amorgos in the 19-20 century. Almost nothing has changed here, locals wear traditional costumes and live according to ancient customs and traditions. In general, Amorgos is a perfect place for people who want to get to know Greek history. There are many historical attractions, dated back to the era of the Hellas height.

In the section below, you can get one of our excursion, activities or city discovery tours over Amorgos Island and surroundings. Our website offers 10-30% lower ticket prices, when compared to the offline purchase on the spot.

City tours, excursions and tickets in Amorgos Island and surroundings

This guide to cultural sights Amorgos Island is protected by the copyright law. You can re-publish this content with mandatory attribution: direct and active hyperlink to www.orangesmile.com.
Amorgos Island - guide chapters 1 2 3 4 5 6 7 8 9

Unique spots in Amorgos Island and near

Distance from Amorgos Island center - 53.8 km.
At present, the island’s population is about 2000 people. in addition to the fabulously beautiful old streets, you can see many unique historical sites and archaeological artifacts on its territory. One of the most interesting objects on the island are the ruins of Egiale. Here, archaeologists have discovered interesting inscriptions. They are dated 3 - 2 centuries BC and narrate that pirates came repeatedly to the island, took values from local residents ​​and even took prisoners. … Read further

Excursions over cultural sights of neighbours of Amorgos Island

Naxos
Everyone can walk through the area of the significant archeological value and enjoy the majestic construction of marble and stone. The port area is domineered with a high hill which is a location of a beautiful Venetian fortress. Near the mighty fortress which has excellently survived till nowadays tourists will find beautiful mansions and palaces. A few centuries ago these ... Open »
Naxos
The waterfront of the capital features the Venetian fortress, a large-scale and very picturesque architectural complex. Luxurious houses and mansions can be seen next to fortifications; the local nobility have lived there a few centuries ago. Suburban areas of Chora are rich in historical sites too. There is the monastery of St. John Chrysostom and the Cathedral not far from ... Open »
Ios Island
If you are interested in the history of the island, be sure to visit the local history museum. There is a rich collection of household items, weapons and jewellery, found during years of excavations. Engineering was highly developed in ancient Greece, you can visit Agia Theodoti and see the ruins of ancient water supply and a tower. Other settlements of the island have their ... Open »
Santorini
To go on exploration and learning of archeological landmarks and sites of the island tourists are recommended to pay a visit to the Thira city which is a capital of the island. The city has preserved numerous ruins and remnants of Byzantine churches and fortifying constructions, the ruins of the Temple of Apollo as well as ancient tombs aged more than two thousand years. One of ... Open »
Patmos Island
It's worth spending some of your time on a walk through the streets of the port city of Skala. Though it is quite young, as they started building here only from the 19th century, when the threat of pirate attacks passed, it is on these streets where you can see many fine examples of a century-old architecture. It is worth wandering around the capital city of Patmos or Chora. ... Open »
Mykonos Island
Be sure to visit the nearby island of Delos. There was a large number of temples in Ancient Greece. The island was considered to be a sacred place. The first people appeared on Delos in the 3rd Millennium BC. Poseidon Hall, Minoan Fountain, the Temple of Apollo, the ruins of the ancient synagogue and Stivadion Platform are the part of a UNESCO world heritage site. You can ... Open »

Culture guide to Amorgos Island. Which fascinating sights to visit once you are in Amorgos Island: temples, churches, museums, theaters and castles. Recommendations (with addresses, phone numbers and links) on the places 'must visit' in Amorgos Island. Plan your own city excursion by using this page info!