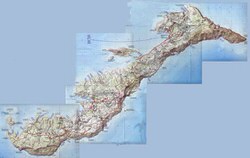 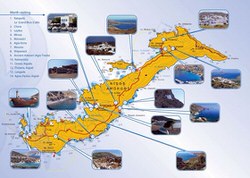 Interactive maps of hiking and biking routes around Amorgos Island

1. You can zoom in/out using your mouse wheel, as well as move the map of Amorgos Island with your mouse.
2. This interactive map presents two modes: 'Biking Routes' and 'Hiking Routes'. Use the '+' button on the map to switch between them.

This Amorgos Island map has two modes: 'Railway Network' and 'Landscape & Rural Map'. Use the '+' button on the map to navigate.

City tours, excursions and tickets in Amorgos Island and surroundings

There are 5 large international airports in the country. About 22 of them have the national status. They also have a right to welcome international flights, but the capacity of their terminals is not too large. Another 25 airports in the country are designed for domestic flights; in particular, for flights from the mainland to the island of Greece. All international airports welcome about 85% of the total number of visitors to the country. They are located close to the major cities of Greece, which can be reached either by public transport, by taxi or transfer. While waiting for the flight or arriving at the airport, passengers can use ATMs or local and international bank offices at the terminal exit. There are various restaurants and cafes, as well as medical aid and baby care rooms in the airport area. Passengers can look into the picturesque souvenir shops and expensive branded boutiques. … Open

On May 1, a traditional festival takes place in Greece, during which city residents leave the metropolitan areas for a while and go to the countryside. At this time, performances, picnics and popular festivities are held. Parties are accompanied by loud music and dancing. At the end of May, a festival of roses takes place on the island of Rhodes. Solemn events are held in the old part of the city, which allows all participants to immerse themselves in the atmosphere of the Middle Ages. At this time, buds are blossoming and fine weather is set on the island. The festival begins with the sound of a trumpet that is heard from the castle. Cavalry and foot knights marche through the streets. In the small village of Epidaurus, there is an ancient theater, which has perfectly preserved to the day. This facility hosts the famous Hellenistic Festival that is one of the most iconic in the theatrical world. … Open

Our guide to Amorgos Island

If you want to buy something that won't go off on the way home, buy a bottle of psimeni raki, a local liquor with the flavour of honey produced on Amorgos. Moreover, you can bring local cheese ladotiri. Feta, several types of cheese and xerotigana, a local delicacy with dill and beet topping can be also found here, but you can hardly take them home, especially if you live far from Greece. The best souvenir which … Open

The port town of Katapola also has a picturesque sandy beach. It’s situated close to the port, so the water is absolutely clean. If the atmosphere on the beach would seem too noisy, you could walk along the coastline and choose one of the quieter parts of the coast. One of the few island’s pebble beaches is located in the picturesque Halara Bay. This attractive pebble beach is well equipped. It’s … Open

Amorgos Island for children - what to visit

Active and curious children who don’t want to spend time at the hotel or on the beach will definitely love Amorgos Island. There are not many water parks and amusement parks on the island. But Amorgos is rich with wild paths, historical and architectural monuments, museums and beautiful beaches with crystal clear water. If your child loves films, be sure to show him places, where the famous Luc Besson «The Big … Open

Amorgos is a popular destination for all foodies and fans of gastronomic tourism. Gourmets and professional chefs arrive on the island in order to try exclusive seafood dishes, freshest fruit and vegetable, and sample best Greek wine. The island is rich is the so-called psarotaverns that can be found not in all regions of the country. Psarotaverns have one striking difference from ordinary taverns – visitors are … Open

Traditions and mentality of Amorgos Island

During a meal, people behave relaxed and don’t follow the rules of etiquette, they chat all the time and can easily push a person or turn a plate with some food without any embarrassment. In general, Greeks are very emotional people and they usually behave very freely. If the Greek wants to laugh-he laughs if he wants to sing – he sings, even if it happens in public transport. Moreover, they can easily … Open

There are many taverns on Amorgos and they are always full of people, despite the fact that Amorgos is not the most popular touristic island in Greece. Taverns are very popular among local inhabitants. Locals love to gather around the table with friends and family, enjoying food and drinks. A tavern is usually owned by the same family for several generations. If you want to try the food, cooked according to the … Open