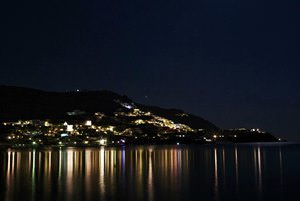 There are various cafes and restaurants on Mykonos. Locals call them taverns. There are different types of taverns. Some of them have an evening show program. Due to the fact, that there are a lot of tourists on the island, some of the taverns are similar to European restaurants. Moreover, you can find world cuisine dishes in a menu of a tavern.
Guide to Mykonos Island sightseeing - things to see and to visit
Mykonos is the scenic Greek island. It's widely known as the beach resort center and a focus of many unique Antique landmarks. The island is very famous due to its night clubs, thus, the …

Open
If you want to try the food, cooked according to the oldest traditions, look for taverns which are far from touristic spots. They are visited by locals and owned by the same family for several generations. Owners of these taverns cook for local citizens, using recipes of their ancestors. Do not expect the European service in taverns. Greeks have nowhere to hurry, but you will definitely try traditional Greek food here.
Be sure to taste horiatiki or village salad on Mykonos. Locals never call it a Greek salad. It is usually made of olives, tomatoes, cucumbers, green peppers, onion and cheese. The salad is not always seasoned with oil, but you can find a bottle of olive oil on the table and add it to your dish. Don’t pass by tzatziki, a local creamy salad with cucumbers and garlic. It is usually used as a sauce to pita or mutton. Copyright www.orangesmile.com
Family holidays with kids in Mykonos Island. How to entertain your child, things to show to children.
Mykonos is an island, which is visited by celebrities, businessmen and politicians. But the island is not only popular with its visitors. Here are a lot of natural and historical …

Open
Don’t pass by pastitsio. It is a baked pasta dish with ground meat and bechamel sauce. Paidakia, brizola, kotopoulo chicken and beef stifado are very delicious meat dishes in Greece. Dolma is a dish made of grape leaves and stuffed with meat. If you want an unusual dish, try kokoretsi. It is a local lamb delicacy. Souvlaki is a popular traditional dish in Greece. You can find this grilled meat in taverns or souvlatzidikos. It is usually made of fish, meat and even vegetables. There is also a fast food dish, called gyro. It is souvlaki with vegetables served in a pita. 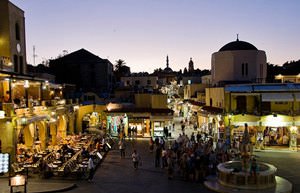 Fish dishes can be found in psarotaverns. The best ones are situated close to the sea. Moreover, you can bring your fish and ask to cook it in a tavern. They serve different seafood such as fish, oyster, mussel, octopus and squid. Be careful when ordering a dish. The thing is that sometimes the menu shows the price per kilo and the portion can cost more or less. One more important thing is «k» or «kat» indications in front of the name of the dish. These indications show that the dish was made of frozen imported fish. Psarotaverns offer a wide choice of dishes. Fish is stewed, fried and boiled here, so choose what you like most.
Authentic traditions, festivals and lifestyle of Mykonos Island inhabitants
Greeks are very emotional people. They often raise voice and interrupt other people. They don’t want to hurt anybody, it is just a behavioural norm for locals. Remember that some …

Open
There are also soups for all tastes in local taverns. Avgolemono is a classic soup of chicken broth, egg yolks and lemon juice. Fasolada is a traditional Greek soup made with white beans. Kakavia is a traditional fish soup. Revithia is a traditional chickpea soup. Local desserts are more eastern than western. The most popular are baklava and lokma. Moreover, locals love yoghurt with nuts and honey. Heavy desserts Greeks usually eat it in winter. Coffee and juice are common soft drinks on the island. But tea is used only as a remedy for a cold. You should definitely taste local retsina, ouzo, grape rakia, metaxa cognac and local wine.

This guide to cuisine and restauraunt in Mykonos Island is protected by the copyright law. You can re-publish this content with mandatory attribution: direct and active hyperlink to www.orangesmile.com.
Mykonos Island - guide chapters 1 2 3 4 5 6 7 8 9

Searching where to eat - restaurants and cafe on Mykonos Island map

Cuisine and restaurants in the neighbours of Mykonos Island

Mykonos City
The island of Mykonos presents gastronomy establishments of different culinary trends however most in demand among island residents and travelers are the eating houses serving local cuisine. The Avli Tou Thodori restaurant which is considered the most popular on the island offers its guests a vast choice of ethnic cuisine dishes. Each dish features original chef execution and ... Open »
Tinos Island
Tinos almost doesn’t differ from the rest of Greece in culinary terms. Delicious and hearty dishes cooked according to old national recipes from natural and fresh products are waiting for you here. You will find horiatiki in any tavern. This is a Greek salad with salty feta cheese and fragrant olive oil. Fried or baked fishes that swam in the sea in the morning are also ... Open »
Naxos
The cuisine of this picturesque Greek island fully complies with national traditions. However, foreign guests are offered some exquisite treats in local restaurants only. Naxos is famous for its delicious cheeses. Arsenico, Gravera and Ksinomizitra are the most popular varieties; they are certainly served in national restaurants. Many travelers prefer to buy local cheese as a ... Open »
Naxos
The best restaurant of the city offering Italian cuisine is justly considered to be the IL Covo eating house. More than ten varieties of pizza, spaghetti added with speciality sauces, inimitable dishes of sea foods and the best sorts of Italian wines will seduce any sophisticated gourmand. It should be noted that all dishes feature not only excellent taste and flavor but ... Open »
Syros
Syros Island may seem deserted only at a first glance. Numerous interesting objects that are sure to fascinate a curious traveler are situated there. Ancient port of Ermoupolis appeals to those who like to walk around the picturesque historic sites. There are several attractive cafes and antique shops within the port district, so foreigners would have a perfect opportunity to ... Open »
Paros
The island of Paros offers its guests a stunning choice of original gastronomy destinations. Even the smallest localities of the island will offer its visitors excellent ethnic restaurants and cafes. A major part of popular restaurants is located in the capital of the island, the city of Parikia. The most upscale and romantic eating place of the city is considered to be the ... Open »