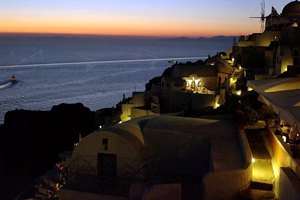 Local folks are rather welcoming and hospitable people featuring a fluttering attitude towards their culture. Through many centuries the local folks have managed to preserve numerous original customs and traditions which are reflected in all spheres of their modern lives. One of the brightest features of national character of local people is superstition though nobody of natives will ever admit his or her belief in bad luck. Interested and observing tourists will note that turquoise ornaments are dominating among local folks. This powerful jewel is considered to be one of the best spell talismans.
Advices to travellers: what you should know while being in Santorini
1. Tourists being not limited in time and wishing to enliven and diverse their leisure should necessarily pay a visit to the city of Rethymno. One may reach the city by ferry. In this case …

Open
Small turquoise beads are much preferred by locals of all ages, turquoise talismans may be found in cars, at stores and boutiques’ entrances as well as in public and governmental institutions. One should not show wonder if one of the locals will knock three times on the nearest wooden thing during a conversation. According to local beliefs this is an exact way to back off misfortune.
Despite a powerful impact of the contemporary culture local folks have managed to preserve numerous pagan customs and traditions which are best exemplified with the relations of local people with God. Traditionally before addressing to the God with a request for help a generous gift should be made. The most popular type of the gift is “tama” being a small size plate made of silver carrying an image of a thing or a phenomenon. Copyright www.orangesmile.com
Best beaches and recreation areas around Santorini
Santorini features incredibly beautiful exotic beaches, each of which is unique and attractive. Akrotiri-Red Beach located next to the cape with a same name is a local attraction. The beach …

Open
The plate can carry an image of a child or a heart. Some people engrave images of much desired material goods and wealth – a house, a yacht or a car. Local people are known for their welcoming character. Tourists should not deny invitations to visit a house of locals. The culture features numerous curious traditions and customs considering guests reception and parties. Traditionally guests should be met with a welcome drink. 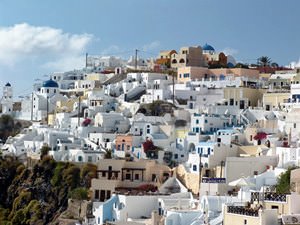 If a guests does not stay in the house overnight then he or she should never comb hair in the house. A doorstep should be crossed only with right leg being a recipe for successful relations of guests and housekeepers. These are only few of those unique customs and traditions being practiced by locals in modern life. These may seem rather weird to foreign guests of the resort of Santorini. Tourists will surely be interested to take part in one of numerous ethnic holidays. The island of Santorini holds various engaging festivals, celebrations and holidays all the year round.
Top hotels in Santorini for business trip or short vacation
Santorini has always been associated with fashionable resorts. The island affects with an abundance of upscale accommodation facilities. Among the most popular hotels in Firostefani, …

Open
Consequently, visiting the Santorini (or Tira Island, as it has been called since the Phoenician times) in mid-September, you can witness the island’s most significant event. It is a colorful event called the Ifestia Festival. If you look at the festival from a bird’s-eye view while it is in progress, you can see how the big cities of the island seem to “burn”. The fact is that in this way it reproduces the Minoan volcano eruption, which took place about four thousand years ago and thanks to it today we know Santorini as it is. This is done with the help of its impressive fireworks. 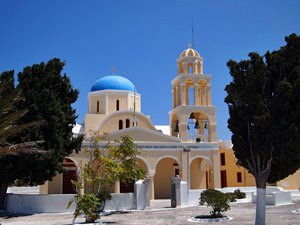 By the way, the festival owes its appearance to chance: for instance, its apogee was a firework during a musical performance in 1991. This action was so pleasant to the locals that they decided to celebrate the fireworks festival separately. It should be noted that the festival program includes not only the launch of fireworks – visitors are expected to enjoy great music concerts and dance performances. The festival’s popularity is evidenced by the fact that around a thousand spectators visit it every year – fans of colorful shows. The brightest fireworks are launched in the capital of Tire Island.
Guide to Santorini sightseeing - things to see and to visit
Santorini Island is located in the Aegean Sea near Crete. This is one of the most attractive islands in the Cyclades. The island appeared after a volcanic eruption, when the part of the …

Open
The Santorini Jazz Festival is popular among melomaniacs and is held in July every year. The venue is one of the most unusual places on the island – precisely the Open Air Cinema Kamari (located in the town of Kamari on Santorini’s east coast), where you can hear jazz and related genres of music throughout July – funk, soul, country, fusion. In regards to the jazz festival, music lovers will also be able to be attracted by the International Music Festival, which begins in early September and goes on for two weeks at the Petros M. Nomikos Conference Centre, located in Tira’s capital city. Musicians from all over the world come to the island to entertain the festival’s visitors and you get to listen to something that never goes out of fashion – the classic pieces of music by outstanding composers, both past and present. 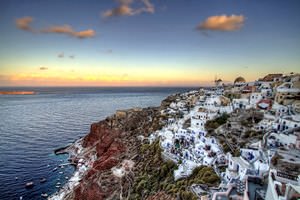 Tourists will also find interesting the entire Megaron Gyzi Festival event dedicated to art. Within the scope of the festival, art exhibitions, and artworks fairs are opened, jazz and classical music concerts are held, and master classes are commenced. All this happen in the beautiful cultural center Gyzi Megaron, which is located in Fira. The festival starts in early August and lasts for three weeks. Another festival of art takes place from June to October and is the island’s longest event. It is a festival called the Santorini Arts Factory, held in the cultural center with the same name that can be found in the city of Vlihada. At this time, the gallery hosts exhibitions of contemporary artists, theater shows, as well as master classes and music concerts.

This guide to traditions and festivals in Santorini is protected by the copyright law. You can re-publish this content with mandatory attribution: direct and active hyperlink to www.orangesmile.com.
Santorini - guide chapters 1 2 3 4 5 6 7 8

Cathedrals and basilicas near Santorini
♥   Cathedral of St. John the Baptist, Santorini, 2.4 km from the center. On the map 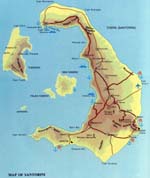 Colors of Santorini in photos

Traditions and festivals in cities around Santorini

Ios Island
Every tourist should know that Greek people have their own gestures. They raise their eyebrows and their whole head upwards, while softly clicking with their tongue. It means «no». When they want to say something, they touch or pat the lower lip with the index finger. A nod of the head with the right hand on the heart means «thank you». If you want to show neglect to a ... Open »
Folegandros Island
Greeks can be hardly called workaholics. All tourists forget about their problems on Folegandros. It is obvious because the island is filled with a relaxed atmosphere. Greeks have a peculiar mentality. They won't spend much time trying to earn money and move up the career ladder. They try to make the most of life. A Greek wakes up at 8 o’clock, has a cup of coffee, works ... Open »
Amorgos Island
Remember that some of the common gestures have a different meaning in Greece. Tourists think that when locals nod, they agree with you, but that is not right. A Greek “yes” is tilting the head to either side and making a sideways motion while slightly closing the eyes. When they want to say something, they touch or pat the lower lip with the index finger. When Greek ... Open »
Naxos
Besides interesting gastronomic festivals, Naxos holds the ones dedicated to modern culture. The largest event on the calendar is the Naxos Festival, which is held throughout the summer. Musicians, theater artists, cinema workers, and artists are invited. Music concerts, art exhibitions, and arts and crafts programs are held in various cities of Naxos. Most of the ... Open »
Sifnos Island
Once in Greece, it is hard not to notice how much the rhythm of life of the local residents differs from what is familiar to many Europeans. Here, no one is in a hurry, and at the forefront there is always the pleasure of life, not making a profit. The Greeks do not like to save money at all. Local people spend easily – on cars, phones, beautiful things, hikes in taverns. ... Open »
Milos Island
While talking, the Greeks like to raise their voices and actively gesticulate. When talking to a local resident, remember that some gestures here have a meaning different from the traditional one. For example, in order to show disagreement, a Greek quickly throws back his head, while clicking his tongue. But if your interlocutor slowly shakes his head from top to bottom, ... Open »

Cityguide on traditions, mentality and lifestyle of people in Santorini. Learn the best periods to visit Santorini to discover its soul - authentic festivals, events and celebrations. We will also reveal the interesting habits, attitude towards the world and to tourists in Santorini.