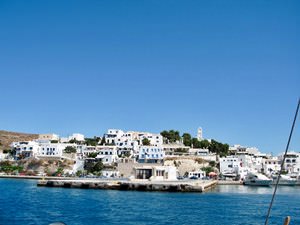 While talking, the Greeks like to raise their voices and actively gesticulate. When talking to a local resident, remember that some gestures here have a meaning different from the traditional one. For example, in order to show disagreement, a Greek quickly throws back his head, while clicking his tongue. But if your interlocutor slowly shakes his head from top to bottom, slightly closing his eyes, then this is the expression of consent. The locals call someone not by bending the palm in a familiar gesture but by shaking hand with the open palm down. Tapping the lower lip with the index finger is interpreted as “quieter” or “kiss” in some cultures, while for the Greeks this gesture means “I want to say something”.
Cuisine of Milos Island for gourmet with top restaurants and cafe
The taverns of Milos will allow you to enjoy all the iconic dishes of the Greek cuisine. If you are interested to try everything exactly how the Greeks prepare food for themselves and not …

Open
And these are not all the differences! For example, the Greeks also have a gesture of shaking head left and right, which usually demonstrates the traditional “no”. Only here it doesn’t mean “no” but rather “I do not understand” or “what do you want?”. Thus, the interlocutor either clarifies for himself the meaning of what you have said or finds out what, in fact, you want from him. If a local resident wants to thank you, he will put his right hand on his heart and nod, often adding an “efharisto” or “efharisto poli”. By the way, whenever possible, you should try to talk to the Greek in his native language, even if you don’t have you can’t do it too well. Here, they love Greece and everything connected to it immensely, and the foreigners’ attempts to master the Greek language are perceived very favorably.
Actually, one of the best ways to win a Greek over, comes from the great patriotism of the locals: you just need to praise his homeland. Best of all – Milos itself, but you can praise the country as a whole. But only do it sincerely – the locals do not like to lie, guided by their own ideas of honor, and do not like lies from the foreigners. Many generally consider the Greeks to be open and simple-hearted people, and there are many reasons for this. It is really not customary to deceive and substitute your neighbor for the sake of your own goals. The Greeks love to live and want to get maximum pleasure from life, and they express this point of view to the visitors. Even the most avid workaholic will definitely rest and relax in Milos, forgetting about the work. Copyright www.orangesmile.com
Excursion over cultural sights of Milos Island - 'must visit' points of interest
In most cases, you will begin your acquaintance with the island from the main local port – the village of Adamas. Here you can admire not only the typical Cycladic architecture but also …

Open
In many ways, because of the desire for pleasure and comfort, many consider the locals rather lazy. It really is not customary to spend a lot of time and effort on making money, and few people save up the money they have already earned. More important than large numbers on the accounts is the opportunity to make a feast at a tavern for at least one evening. By the way, the attitude towards the taverns in Greece is special. This is not just an analog of a restaurant with a “national flavor” but a real resting place. In the evenings, the taverns are filled to capacity, and not because the Greeks do not like to cook. It is just customary here to communicate with friends, relatives, and acquaintances at dinner.

Perhaps the unusual approach of the Greeks to the hospitality owes it to the traditions of evening meetings with relatives in taverns. No one will leave you on the street in a critical situation, and in the house, a guest is always treated with honor and respect. But an invitation to a Greek house does not mean dinner at all, and this must be taken into account. By the way, after meeting someone local, call him by his last name until he offers you to address him by name.
Your active city break in Milos Island. Attractions, recreation and entertainment - best places to spend your day and night here
For those who like beach rest, Milos is great. Most travelers and locals deservedly consider Paleochori the best local beach. Large length, purity, unusual cliffs of different colors, and …

Open
Here they are very respectful of the older generation, not only relatives but also the elderly in the whole. Perhaps this is due to some supernatural desire of all the Greeks to give advice to each other, showing their authority and competence, though not always justified. Many marry here rather late, and, interestingly, matriarchy often reigns in families, although not a single Greek man will admit this to you. If you are a lonely representative of the fair sex, then you should know: on Milos, you will surely find yourself in the center of attention of the local young men, men, and often even old people. It is common here to flirt with a lady, regardless of her age and looks.

This guide to traditions and festivals in Milos Island is protected by the copyright law. You can re-publish this content with mandatory attribution: direct and active hyperlink to www.orangesmile.com.
Milos Island - guide chapters 1 2 3 4 5 6 7 8 9

Colors of Milos Island in photos

Traditions and festivals in cities around Milos Island

Sifnos Island
Once in Greece, it is hard not to notice how much the rhythm of life of the local residents differs from what is familiar to many Europeans. Here, no one is in a hurry, and at the forefront there is always the pleasure of life, not making a profit. The Greeks do not like to save money at all. Local people spend easily – on cars, phones, beautiful things, hikes in taverns. ... Open »
Folegandros Island
Greeks can be hardly called workaholics. All tourists forget about their problems on Folegandros. It is obvious because the island is filled with a relaxed atmosphere. Greeks have a peculiar mentality. They won't spend much time trying to earn money and move up the career ladder. They try to make the most of life. A Greek wakes up at 8 o’clock, has a cup of coffee, works ... Open »
Seriphos Island
Greeks are quite sociable and emotional people by their nature. On Serifos, you will repeatedly see the communication between local residents who raise a voice, use gestures and interrupt each other. Despite the fact that these emotional discussions make you feel that locals will fight, this is unlikely to happen, because the conversation is likely to be about something like ... Open »
Ios Island
Every tourist should know that Greek people have their own gestures. They raise their eyebrows and their whole head upwards, while softly clicking with their tongue. It means «no». When they want to say something, they touch or pat the lower lip with the index finger. A nod of the head with the right hand on the heart means «thank you». If you want to show neglect to a ... Open »
Santorini
The plate can carry an image of a child or a heart. Some people engrave images of much desired material goods and wealth – a house, a yacht or a car. Local people are known for their welcoming character. Tourists should not deny invitations to visit a house of locals. The culture features numerous curious traditions and customs considering guests reception and parties. ... Open »
Attica Region
If you arrive here on Christmas Day (December 25), you will be able to take part in the traditional Christmas carols, to attend a festive church service and to taste the delicious Christ's Bread (Christopsomo). This bread is baked on Christmas Eve; cinnamon, crushed cardamom seeds and walnuts are its essential ingredients. Christ's Bread is considered a sacred tradition in ... Open »

Cityguide on traditions, mentality and lifestyle of people in Milos Island. Learn the best periods to visit Milos Island to discover its soul - authentic festivals, events and celebrations. We will also reveal the interesting habits, attitude towards the world and to tourists in Milos Island.