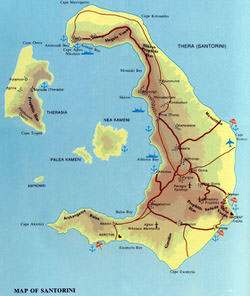 Interactive maps of hiking and biking routes around Santorini

1. You can zoom in/out using your mouse wheel, as well as move the map of Santorini with your mouse.
2. This interactive map presents two modes: 'Biking Routes' and 'Hiking Routes'. Use the '+' button on the map to switch between them.

This Santorini map has two modes: 'Railway Network' and 'Landscape & Rural Map'. Use the '+' button on the map to navigate.

Vikos-Aoos National Park is also located in the Pindus Mountains, but it has a different terrain. The park includes Vikos Canyon, Aoos Gorge, and Mount Timfi. The place is unique in its beauty and features of the landscape. The gorge is even included in the Guinness Book of Records as the deepest in the world. The glacial Dragon Lake is on the slopes of Mount Timfi. According to local legends, in prehistoric times, these lands were inhabited by dragons, who fought. They threw rocks and stones at each other. This is how the unique relief of the park was created. Besides a huge number of amazing animals and plants, you can meet unusual settlements in the mountainous region of Zagori. … Open

Our guide to Santorini

The city of Pyrgos, a former capital of the island, keeps plenty of remarkable landmarks and sites of tourist attraction. Its main symbol has for many years been the Church of Pangea Episkopi with its inestimable relic being the icon of Virgin Mary. A trip through the winding streets of Pyrgos will be full of unforgettable impressions as the views have almost not been changed for long centuries. The main feature of … Open

A truly unique hotel can be found in the picturesque village of Imerovigli. La Maltese can be found at the highest point of the island. The entrance to the hotel is equipped with a spacious terrace covering an area of 250 square meters; it is ideal for admiring the surroundings. All rooms are individually decorated and complemented by works of art in the traditional style. The hotel offers a wide range of wellness … Open

Local water parks will be a perfect place to visit for tourists traveling with kids. Not far from the Perissa beach travelers will find the Santorini Waterpark featuring a rather small scale, however offering excellent on water entertaining facilities. Its visitors will find numerous water slopes and rides, bright swimming pool with a large lounge terrace as well as a cozy restaurant. The island offers a vast choice … Open

This small cozy restaurant serves guests till late night. The specialities of the eating house are considered to be fish dishes and the most popular treat on the menu of numerous local gastronomy establishments of the resort being Greek salad. A beach near the restaurant is an established place for holding of different parties, entertainment events and competitions. Those tourists tending to a private and cozy … Open

Traditions and mentality of Santorini

The plate can carry an image of a child or a heart. Some people engrave images of much desired material goods and wealth – a house, a yacht or a car. Local people are known for their welcoming character. Tourists should not deny invitations to visit a house of locals. The culture features numerous curious traditions and customs considering guests reception and parties. Traditionally guests should be met with a … Open

Santorini has many excellent museums which show visitors culture and history of the island. The most unusual is the Museum of Wine. It occupies the building of an old winery of the 19th century. This winery was founded in a large natural cave at a depth of 8 meters beneath the ground over 150 years ago. The underground maze is of amazing proportions. Its length is about 300 meters. You can walk down the cave … Open