Sightseeing in Marmaris - what to see. Complete travel guide 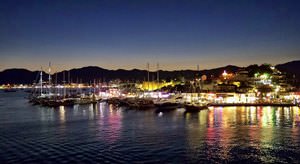 Marmaris is a city located in the world's largest harbor. This is a place on the south-western side of Turkey where meet the Mediterranean and the Aegean Sea. Marmaris is a famous Turkish resort, 76 percent of which territory is covered by forests and small hills that stretch along the coast.
Cuisine of Marmaris for gourmet with top restaurants and cafe
Marmaris is a genuine gastronomy destination for gourmands and haute cuisine admirers. The city features plenty of upscale and exotic restaurants for real connoisseurs; meanwhile prudent …

Open
Since ancient times Marmaris has been famous as Physkos. That place was well-known for its trading traditions. Later the town was captured by Alexander the Great, and then by the Byzantine Empire and Seljuk. Only during the period in the history of the city when it was ruled by the Ottomans, Marmaris was rebuilt and got its modern name. Only the fortress of Sultan, which rises proudly in the center of the city reminds of those times.
Since ancient days the city of Cnidus was located in Marmaris. That place was founded in the IV century BC. Today this place is widely visited by tourists who come to see the ruins of the temple of Aphrodite, walk among the remaining foundations of old houses and stands of ancient amphitheaters. Natural landmarks of this place are Millet and Ephesus, where St. John the Evangelist has written three Catholic Epistles and the Gospel. Copyright www.orangesmile.com
Authentic traditions, festivals and lifestyle of Marmaris inhabitants
Rug making is a widely known ethnic craft which is rather illustrative of ethnic peculiarity of local people. The so called rug making craft appeared many centuries ago. Today the handmade …

Open
Not far away from Marmaris is located the landscape place of interest - Pamukkale - the eighth wonder of the world, which waters contain a lot of mineral salts and, therefore, the streams that fall down from high ledges create unforgettable white cascades. Finally, in the vicinity of the city is located an island of Cleopatra that is famous for its special white sand that prevents sunburns. 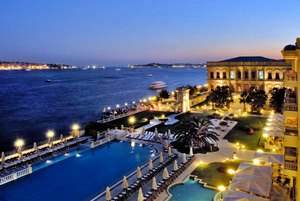 When entering the city, you can see a very interesting sculpture called the Pearl. It has a very unusual shape. The sculpture is made in the form of a half-open globe, inside of which is hidden a miniature pearl. For the city, this sculpture is a national monument. It is in a very beautiful area. From the square in front of the sculpture, a chic mountain view opens up.
Excursion over cultural sights of Marmaris - 'must visit' points of interest
The first town on the area of modern Marmaris was established far back in ancient times. The name of the ancient town was Physkos. Nowadays the territory of Marmaris features a small part of …

Open
With the approach of evening, the guests of the resort should definitely visit one more landmark - a singing fountain. It was built in 2012 on the site, where previously there was a well-known supermarket Tansas. In the evening, this wonderful fountain turns into a real extravaganza of music and light. It is noteworthy that its musical program never repeats. The enchanting show begins every evening at 9PM. Tourists as well as locals, come to watch it. 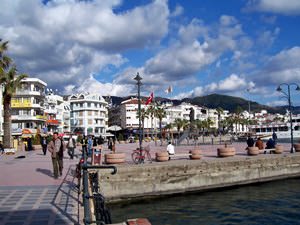 Fans of unusual excursions enjoy traveling to the Hare Island. On its territory is a mysterious Cave of Pirates, which is associated with many amazing legends. It is believed that it was in this Cave that pirates hid their loot. According to legends, a part of the untold treasures is hidden in the cave even now. Once in it, there was one more pass of more than 100 meters in length. It crumbled during the next collapse and completely blocked the way to the hall where treasures were stored. In this Cave, there are interesting attractions for tourists - they are invited to participate in the most real excavations and take with them all the artifacts found.
Your active city break in Marmaris. Attractions, recreation and entertainment - best places to spend your day and night here
Marmaris is an excellent destination for active leisure enthusiasts. Travelers giving preference to hiking through scenic areas will also find the destination to be perfect for recreation. …

Open
The most beautiful natural landmark is the Turgut Waterfall. It is located on the territory of a picturesque park. The height of this waterfall is about 5 meters. Here interesting excursions are organized for travelers. A pleasant addition to rest in nature will be an opportunity to swim in the beautiful waterfall. 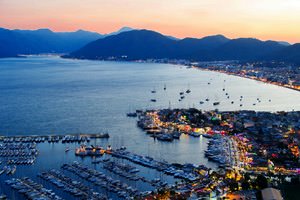 For those who want to get acquainted with the culture and traditions of locals, it is worthwhile to make an excursion to the nearby village of Turgut. Here you can walk along the beautiful old streets with miniature houses, as well as watch the locals, who continue to wear exclusively national costumes every day. If you are lucky enough to look in the house of one of the local families, you can see in the furnishings, items of different old utensils.

This guide to iconic landmarks and sights of Marmaris is protected by the copyright law. You can re-publish this content with mandatory attribution: direct and active hyperlink to www.orangesmile.com.
Marmaris - guide chapters 1 2 3 4 5 6 7 8 9

Survived castles around Marmaris
♥   Castle 'Palace of the Grand Master of the Knights of Rhodes' Rhodes, 45.1 km from the center. On the map

♥   Castle 'Fortifications of Rhodes' Rhodes, 46.5 km from the center. On the map

National and city parks around Marmaris
♥   World Heritage Site 'Hierapolis-Pamukkale' , 141.5 km from the center. On the map

Sights around Marmaris from our guide 'Extreme places on Earth'

Distance from Marmaris center - 44.5 km.
A few years ago, unique designs for restoration of an antique statue were presented to the world. In 2008, the most interesting project of the lighting installation was shown. In 2015, a group of engineers decided to erect a 150 meters high monument. According to the organizers of the project, a leisure complex will be located inside a huge statue. There's another interesting fact about the history of this ancient statue. It's suggested that one of the most famous sculptures of today, the Statue of Liberty, was created in the image of the Colossus of Rhodes. … Read further

Search touristic sites on the map of Marmaris

Sightseeing in regions nearby Marmaris

Faliraki
Shopping fans will find here a huge selection of boutiques and shops where they will be able to buy souvenirs and handicrafts. Picturesque beaches are well equipped for water sports, so fans of underwater hunting, scuba diving and surfing will find much interesting here. In addition to beach activities, tourists are offered to enjoy tennis, volleyball or basketball, as well as ... Open »
Rodos
Rich historical heritage is one of attractive features of the resort. Here have remained numerous monuments, each of which is unique and unforgettable. The main part of the attractions is located in the so-called Medieval town. Chora district is the location of several mosques, churches and homes. The most famous structures are Suleiman Mosque, Church of Chora Mother of God, ... Open »
Bodrum
The fort has a large trading street that is full of cozy shops, cafes, restaurants and snack bars. The embankment of this town is beautiful and very original. When tourists come to see Bodrum, first they usually don’t like very small and narrow streets that look quite depressively. However, if you take a walk along them, you will change your opinion and see the town and ... Open »
Fethiye
Paroplane flights are one of new entertainments, which have quickly gained popularity among holidaymakers. Such an unusual "air" tour lasts approximately 30 - 40 minutes. Everyone can make this breathtaking flight. Experienced instructors will carefully pick up the route so that you will see all main attractions of the city from a bird's eye. The central part of Fethiye is ... Open »
Kos
The castle of loannite Knights built in the 15th century is one of those facilities. Stones and marble left from the houses destroyed by the earthquake were used during the building of the fort. Palm Avenue is one more interesting place recommended for visiting. Here you will see a huge sycamore. According to one of the theories, the tree was planted by Hippocrates. Under the ... Open »
Tilos Island
There are also amazing historical sites on the island. It’s recommended to start excursion from the administrative center of Tilos, Megalo Horio. The main historical symbol of town is the Castle of Knights. Architecture of Metalo Horio is extremely attractive; the new town was built on the site of a large ancient settlement. While walking through town’s winding streets, you ... Open »

All about Marmaris, Turkey - sightseeings, attractions, touristic spots, architecture, history, culture and cuisine. Prepare your trip together with OrangeSmile.com - find out the 'must see' things in Marmaris, which places to visit, which excursions to take, where the breathtaking views are waiting for you. Planning your trip with this travel guide will help your to get the most out of Marmaris in few days.