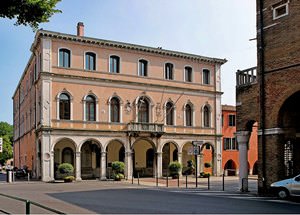 Mestre is a scenic Italian city favorable for cruising on foot and exploring unique landmarks and sights and enjoying beautiful streets. The Piazza Ferretto square is the heart of the city. The square is commonly a starting point of may touristic routes and tours. There is the highest in the city watch tower Torre dell’Orologio. All the city guests may get up to the observation platform and enjoy a vibrant panoramic view of the city and its scenic suburbs. All the landmarks are in full view from the platform. Not far from the square tourists will find an ancient park named San Giulliano, aged more than a hundred years. It has turned to an established place of holding of different music events and fests and street performances which take place in Mestre almost every week. During weekdays city residents and guests give preference to quiet serene rest in the greenery of aged trees. The scenic park is considered to be the most remarkable sight of the city.
Authentic traditions, festivals and lifestyle of Mestre inhabitants
Mestre participates actively in virtually all events taking place in the Veneto region. Besides the famous Venice Carnival, its guests can attend the interesting religious festival La Sensa …

Open
During park exploration the tourists will come across the Ponte della Liberta (Bridge of Freedom) which joins Mestre and Venice. The historical part of the city is as well of the greatest attraction for tourists. Its territory has preserved lots of architectural landmarks of different epochs. The St. Lawrence Church is one of the most remarkable sights among them. The church was built in the 17th century and appears to visitors in its initial look and state at present.
The church features plenty of religious artifacts the age of which counts in centuries. The city tour should also include a visit to the Palazzo da Re building which presents a consonant fusion of various architectural styles and trends. Dramatic art connoisseurs will like the Toniolo theater set not fat from the central square of the city. Copyright www.orangesmile.com
Your active city break in Mestre. Attractions, recreation and entertainment - best places to spend your day and night here
The city of Mestre features inimitable romantic ambience and ultimate beauty offering its guests plenty of attractions and entertainments for fascinating vacations. The city does not offer …

Open
The theater regularly holds first nights of theatrical and opera performances and a pompous building which hosts the theater is an important architectural landmark of the city. Tourists who will lack the sights and landmarks of the Mestre city should join a tour to Venice. Those looking for a more privatized and serene recreation should set off to country towns which have managed to preserve numerous historical landmarks and sights as well. 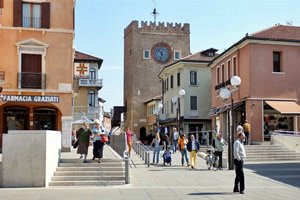 Connoisseurs of art (contemporary art in particular) will love Mestre where themed exhibitions are often held in museums and art galleries. It has many cultural institutions with permanent exhibitions of works of fine and sculptural art. Among art galleries and museums, Galleria Massimodeluca, Galleria Contemporaneo, as well as D'E.M stand out. Those who want to learn more about how Italians lived in the 20th century must visit the Museo M9 where most of the exhibits are interactive. These include household items, memorabilia, jewelry, photographs.
Advices to travellers: what you should know while being in Mestre
1. The city center of Mestre is convenient for on foot exploration as all the significant landmarks and entertaining centers are located in close vicinity to each other. Drivers will …

Open
Forte Marghera, a wonderful monument of the 19th century, is a fortress that played an important role in the defense of the region. Interesting holidays and festivals are often held here today. Before visiting the attraction, find out whether an interesting event is being held here now, if you want “to kill two birds with one stone” - visit a symbolic place and attend an interesting event at a time. The complex is a museum with artillery weapons, a completely restored fortress, as well as restaurants and bars. It is surrounded by beautiful green landscapes. There is also a small town for stray cats where visitors are always welcome. 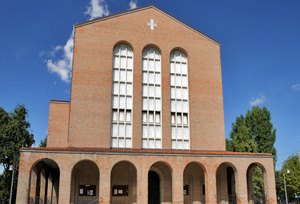 Another monument interesting for tourists is Duomo di San Lorenzo Martire, the main Catholic cathedral in Mestre. Today, the building features a neoclassical design, which was acquired in 1805 when it was last reconstructed. However, there have been various churches on its site since 1152. Another impressive religious monument is Chiesa di San Girolamo, which was built in the 18th century in an eclectic style (combines Gothic and Baroque) on the site of an older church, the first mention of which dates back to the early Middle Ages. Tourists visit this church not only for the rich history and beautiful facade but also for its magnificent interior decoration.
Guide to Mestre sightseeing - things to see and to visit
Mestre is a charming small town in northern Italy. Venice is located very close to Mestre. Both cities are connected with a big railroad bridge named the Liberty Bridge. The town’s …

Open
A vivid example of Neo-Romanesque architecture is Parrocchia Santa Maria Immacolata di Lourdes, which attracts tourists with its cozy atmosphere and, most importantly, beautiful appearance as if saying - the place is worthy of a visit. Chiesa dei Santi Gervasio e Protasio restored at the beginning of the 20th century is considered one of the oldest buildings in the Veneto region. The current neo-Gothic appearance of the religious attraction was designed by the architect Giovanni Baptiste Meduna 1912. 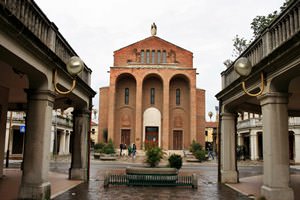 A beautiful monument of the Art Nouveau architecture is Cinema Excelsior, a cinema built at the beginning of the 20th century where locals and tourists go to watch new movies. Before that, be sure to take a couple of minutes to explore the attraction itself. Those interested in theatrical performances are encouraged to visit several other cultural institutions besides the already mentioned Toniolo Theater - for example, the Teatrino della Murata or the Teatro Corso. Before that, it is worth checking out their repertoires, of course.

In the section below, you can get one of our excursion, activities or city discovery tours over Mestre and surroundings. Our website offers 10-30% lower ticket prices, when compared to the offline purchase on the spot.

This guide to cultural sights Mestre is protected by the copyright law. You can re-publish this content with mandatory attribution: direct and active hyperlink to www.orangesmile.com.
Mestre - guide chapters 1 2 3 4 5 6 7
Reference information
Map of all palaces

Public palaces near Mestre
♥   Palace 'Palazzo Labia' , 8.3 km from the center. On the map

Art galleries in Mestre and around
♥   Art museum 'Ca Pesaro' Venice, 8.8 km from the center. On the map

♥   Art museum 'Gallerie dell Accademia' Venice, 9.4 km from the center. On the map

♥   Basilica della Madonna Grande, Treviso, 19.5 km from the center. On the map

Photogallery of cultural heritage of Mestre

Excursions over cultural sights of neighbours of Mestre

Venice
Of course, St. Mark’s Cathedral remains the most famous landmark of Venice. The beautiful same named square located near it is also an important tourist attraction. The cathedral impresses visitors with its luxurious furnishings. Here you will see gold mosaic, furniture and other elements of interior decorated with precious stones, and the altarpiece Pala D'Oro - a true ... Open »
Padua
The last design of the religious building was managed by the famous artist Michelangelo, however his great plan failed to be realized and completed. The building of the cathedral was not completed that is why its current look is rather modest. In the neighborhood of the Cathedral tourists will find the ancient Baptistry which is remarkable for its inimitable inner decoration. ... Open »
Veneto
Those who like to relax in a tranquil and secluded ambience would like an ancient town of Treviso, which is often called Little Venice. It is a very cozy and picturesque city with the unique medieval atmosphere. Thanks to works of local residents, Treviso has retained its charming historic center that gives a lot of impressions to tourists. There are outstanding natural ... Open »
Vicenza
A landmark of world importance is the Palazzo Chiericati building rising on one of the hills. Modern architects do not cease to admire the beautiful villa, which was also designed by the aforementioned architect. The villa was built in 1571 by order of Count Girolamo Chiericati who loved to stay in Vicenza. The world-famous local attraction is the Teatro Olimpico ... Open »
Verona
There is one more important sightseeing destination near the church – old Ponte Scaligero. Near the church are buried the members of the noble della Scala family. Their tombs are decorated with artful and architectural monuments. Fans of the famous Shakespeare's tragedy should definitely visit the house of Juliet. In the 13th century the beautiful mansion belonged to Dal ... Open »
Porec
Trips to Saint Nicola’s island are very popular. On its territory there is beautiful Toscana tower, which was built at the beginning of 19th century. At the present time this is the luxurious hotel. There is another important trip object in the island – age-old lighthouse, whose age is older than 6 hundred years. During walking along old city’s streets resting people can ... Open »

Culture guide to Mestre. Which fascinating sights to visit once you are in Mestre: temples, churches, museums, theaters and castles. Recommendations (with addresses, phone numbers and links) on the places 'must visit' in Mestre. Plan your own city excursion by using this page info!