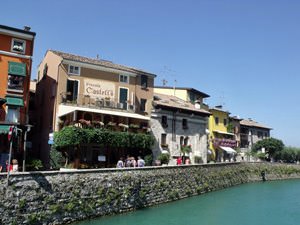 Piazza delle Erbe is the most famous square of Verona. Near it you will find several major architectural landmarks of the city. Here you will see the beautiful palace of Maffei, as well as House of the Merchants and Torre del Gardello. The construction of the tower was completed in 1370. The tower is distinguished by original style. In 1626, during the restoration of the tower, it was enlarged and new details were added to it.
Family holidays with kids in Verona. How to entertain your child, things to show to children.
The town of Verona is famous for its historical monuments and museums. However, not only lovers of excursions will like to have a vacation here, but also tourists with children. In the city, …

Open
Case Mazzanti is a beautiful architectural monument of the Middle Ages. It was built in the 16th century. Its facade is decorated with artful murals, which depict scenes from various ancient myths. There are also some monuments of Roman times which have survived in Verona. Amphitheatre is considered the most famous among them. According to archaeologists, it was built in the 1st century BC. This is a massive structure, during the construction of which was used rare marble. According to preliminary calculations, the amphitheater could accommodate about 30,000 spectators.
Vacationers should definitely not forget to see the beautiful arch bridge of Ponte Pietra, the building of was also conducted yet in the prehistoric era. The bridge was seriously damaged during the Second World War, but thanks to efforts of skilled architects it was restored. Santa Maria Antica Church remains one of the most interesting religious sites of the city. This is a beautiful building made in the Romanesque style. For a long time it was used as a family chapel for privileged persons. The first church was built yet in the 7th century, but the building was completely destroyed by a strong earthquake. The cathedral, which visitors can see today, was built in the end of 12th century. The magnificent building is made in best traditions of Romanesque style. Copyright www.orangesmile.com
Cuisine of Verona for gourmet with top restaurants and cafe
The local cuisine is quite diversified. Chefs of Verona are the authors of many well-known dishes that are popular among gourmets around the world. Each restaurant of national cuisine will …

Open
There is one more important sightseeing destination near the church – old Ponte Scaligero. Near the church are buried the members of the noble della Scala family. Their tombs are decorated with artful and architectural monuments. Fans of the famous Shakespeare's tragedy should definitely visit the house of Juliet. In the 13th century the beautiful mansion belonged to Dal Capello family, which was used as the prototype of the Capulet family. There is also a house of Romeo in Verona – a beautiful building of the 14th century made in Gothic style. Despite the fact that these attractions have no real connection with literary heroes, travelers still believe in the beautiful legend and keep visiting these romantic places. 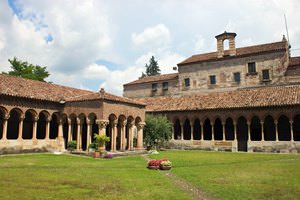 But the sights of this city, immortalized by Shakespeare, do not end there. The Teatro Romano, a spectacular ruin in the center of Verona, where unimaginably beautiful views of the river open up, has become a compulsory route. Here on the top floor, is located the Museo Archeologico, where among the exhibits are findings discovered during excavations. Rising even higher, you can find a cafe where you can sit perfectly while enjoying picturesque views. It would be particularly great if you visit a cafe with your second half – many do so. Verona is precisely associated with romance and love.
Authentic traditions, festivals and lifestyle of Verona inhabitants
Many people think of a touching love story of Romeo and Juliet when they hear the word “Verona”. Indeed, the plot of the famous tragedy by Shakespeare took place here. Each year the city …

Open
Palazzo della Ragione is another interesting place judging from its architectural layout. This kind of architecture although not typical of the architecture of the Middle Ages, also attracts attention immediately it is gazed upon. This red and white building was built in the 12th century (though the first buildings on this place were built even earlier), but since then, it has been rebuilt more than once. The most attractive place to visit is the courtyard, the building being famous for its unrivaled gothic staircase. Another palace, the Palazzo Giardino Giusti, astonishes with its romantic view. You should as a matter of necessity, visit it if you are traveling with your better half. The cypress trees growing here are interesting, and the beautiful fountains and sculptures add to the romantic feel as well. 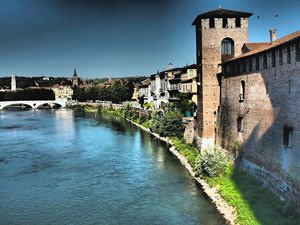 You certainly cannot pass by an elegant and majestic building such as the Arca di Cansignorio without becoming fascinated by it. It is one of the most beautiful places in the city. Besides, it is one of the symbols of the city, immortalized by Shakespeare. Its arch was built in the 13th-14th centuries in the Gothic style. It is in fact, a tomb, where they buried the representatives of the Scaliger dynasty who ruled Verona during those times. However the best views of the capital of romance can be seen, if you climb up the tower Torre dei Lamberti. The time of its construction dates back to the 12th century, but despite this, the tower is still the tallest building in the city. Thus, it would not be strange if you become surprised by the unprecedented craftsmanship of the builders and engineers of that time.
Your active city break in Verona. Attractions, recreation and entertainment - best places to spend your day and night here
Without a doubt, shopping remains one of main entertainments of travelers. Luxury boutiques and modern shopping centers, souvenir shops and interesting markets welcome visitors simply every …

Open
Talking about the interesting museums in the city, first of all, it is worth noting the Museo di Castelvecchio. Besides the fact that there are beautiful entertaining exhibits here (frescoes, sculptures, paintings of the 14th-16th centuries), the building is also attractive from an architectural point of view. Especially striking are the views from the interior on the Skaliger’s Bridge, which is beautifully illuminated in the evening. The Il Museo Del Giocattolo will appeal to even the youngest visitors, as hundreds of toys are displayed there. The Museo Canonicale is also architecturally interesting. It is located in the Complesso della Cattedrale-Duomo courtyard. Beautiful exhibits are also represented here, among them, church utensils, and works of sacred art.

In the section below, you can get one of our excursion, activities or city discovery tours over Verona and surroundings. Our website offers 10-30% lower ticket prices, when compared to the offline purchase on the spot.

This guide to cultural sights Verona is protected by the copyright law. You can re-publish this content with mandatory attribution: direct and active hyperlink to www.orangesmile.com.
Verona - guide chapters 1 2 3 4 5 6 7 8 9 10 11 12 13 14

What to visit during two-day excursion in Verona

Public palaces near Verona
♥   Palace 'Palazzo Canossa' Verona, 0.2 km from the center. On the map

Art galleries in Verona and around
♥   Art museum 'Castelvecchio Museum' Verona, 0.4 km from the center. On the map

Cathedrals and basilicas near Verona
♥   Basilica di S. Teresa di Gesù Bambino in Tombetta, Verona, 2.6 km from the center. On the map

♥   Basilica di S. Andrea Apostolo, Mantova, 35 km from the center. On the map

Photogallery of cultural heritage of Verona

Excursions over cultural sights of neighbours of Verona

Vicenza
A landmark of world importance is the Palazzo Chiericati building rising on one of the hills. Modern architects do not cease to admire the beautiful villa, which was also designed by the aforementioned architect. The villa was built in 1571 by order of Count Girolamo Chiericati who loved to stay in Vicenza. The world-famous local attraction is the Teatro Olimpico ... Open »
Veneto
Those who like to relax in a tranquil and secluded ambience would like an ancient town of Treviso, which is often called Little Venice. It is a very cozy and picturesque city with the unique medieval atmosphere. Thanks to works of local residents, Treviso has retained its charming historic center that gives a lot of impressions to tourists. There are outstanding natural ... Open »
Padua
The last design of the religious building was managed by the famous artist Michelangelo, however his great plan failed to be realized and completed. The building of the cathedral was not completed that is why its current look is rather modest. In the neighborhood of the Cathedral tourists will find the ancient Baptistry which is remarkable for its inimitable inner decoration. ... Open »
Parma
The same attractive and interesting architectural landmark of Parma is considered to be the Palazzo della Pilotta. The building of the palace features original weird form. The palace is a complex labyrinth of numerous rooms, stair flights and cozy inner porches. A tour over the palace will be of great interest to all guests. The age of the palace is about 400 years however it ... Open »
Lombardy
Visitors of the city should definitely see the beautiful Duomo and stroll through the picturesque Sempione Park. Fans of architectural attractions would like Galleria Vittorio Emanuele II; this is an incredibly beautiful building with exquisite facade decorated with sculptures. Currently, the historic building houses luxury boutiques and fashionable restaurants. A lot of ... Open »
Mestre
The theater regularly holds first nights of theatrical and opera performances and a pompous building which hosts the theater is an important architectural landmark of the city. Tourists who will lack the sights and landmarks of the Mestre city should join a tour to Venice. Those looking for a more privatized and serene recreation should set off to country towns which have ... Open »

Culture guide to Verona. Which fascinating sights to visit once you are in Verona: temples, churches, museums, theaters and castles. Recommendations (with addresses, phone numbers and links) on the places 'must visit' in Verona. Plan your own city excursion by using this page info!