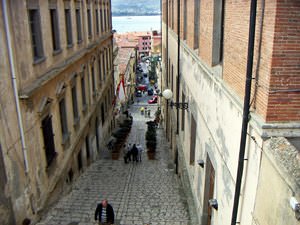 In Elba, you can visit a lot of cult buildings, which has a rich history. For example, The Church of Mercy, named in honor of the Brotherhood, founded by Giovanni Medici, has been opened to the congregation for more than three centuries. This is the place, where the remains of Saint Christian, the patron of Elba, are preserved. By the way, in this church, they have been having a service in honor of Napoleon since 1852. Near the cathedral, there is a museum, dedicated to the history of the Brothers of Mercy, where you can also find a death mask of Napoleon and the flag, which was given to the Emperor at landing on the island.
Best beaches and recreation areas around Elba Island
There are lots of charming bays and gulfs for leisure on Elba; the island has very different beaches. Paolina mixed sand and pebble-stone beach is widely regarded as one of the most scenic …

Open
Portoferraio cathedral is almost a century older than The Church of Mercy. Its construction started in the middle of the 16th century. The building is perfectly preserved and is operating now as well as it has been more than four centuries ago. The sanctuary of Madonna del Monte is famous not only for its image of the Mother of God, which was presumably created in the 13th century but also as a place of secret dates for Napoleon and Maria Walewska. By the way, the murals, which many historians relate to Sodom, are also kept here.
However, Elba was not only an important part of Italy’s spiritual life. Powerful people were interested in this island for centuries. The fortifications, which were built by Medici in Portoferraio, can be seen from far away and still look as they watch over the city. Although all four levels of the fortress have suffered from some decay over the last four centuries, they are still impressive. You should not only walk inside the fortifications but also get at the top and enjoy the view from the ancient walls. Copyright www.orangesmile.com
Top hotels in Elba Island for business trip or short vacation
Island of Elba offers its guests more than 200 hotels, inns and apartments to choose from. The most luxurious hotels are situated in Portoferraio, and exclusive Hermitage hotel is the one of …

Open
Despite their greatness, Medici’s shafts are not the oldest fortress on the island. Nobody knows when the Volterraio castle was built, but it is a fact that it has already been there in the 13th century, as in 1281 it was reconstructed. This powerful building had never been conquered by the Turkish. The defense system of the island included several watchtowers, built for the protection from the pirates. Those include Torre della Marina in Marciana Marina harbor, which was built in the 16th century, and Torre San Giovanni, which construction goes back to the 12-13th centuries – the times of the domination of Pisa Republic on the island. 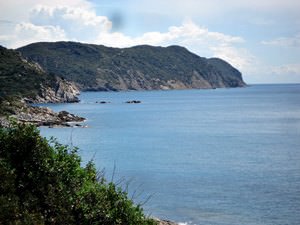 Certainly visit Valla San Martino. In the middle of the 19th century, the husband of Napoleon’s niece built a gorgeous gallery near the capital of the island. It still has a whole collection of items associated with the Emperor’s name. The villa itself, which original rooms are located above the gallery, was Napoleon’s summer residence for a couple of years. Villa dei Mulini, which was built in the middle of the 17th century and was also a residence of France’s ruler, has been recently restored and now you can not only see the architectural decisions Napoleon liked but also the furniture that he preferred.
Shopping in Elba Island - main shopping streets, outlets and boutiques
You can buy shoes and cloth of all leading European brands at affordable prices in Elba. You should go to the nearest shopping mall, and for a proper shopping go to the capital of the island …

Open
Although, there are a couple of great expositions on the island, which are not connected to the name of the famous Emperor. For instance, the collection of the city archeological museum of Marciana. There are findings from the Stone Age, and artefacts from the times of Etruscan settlements, and items from the sunken ships of the Roman Empire. Villa delle Grotte is a very unusual place, which everyone should visit, being in Elba. Nobody knows exactly, whom had this building belonged to first, though even Ovidius mentioned it. Abandoned in the very beginning of our era, the villa was restored in the 18th century to become a fortification for the battery at the front border between French and the kingdom of Naples’ armies. Now the building is almost totally destroyed, however you can easily understand the initial idea of the constructors. If you are interested in the lives of the miners in Elba, you can visit a museum, dedicated to their life at the mines.

This guide to cultural sights Elba Island is protected by the copyright law. You can re-publish this content with mandatory attribution: direct and active hyperlink to www.orangesmile.com.
Elba Island - guide chapters 1 2 3 4 5 6 7 8 9
Reference information
Map of all art museums

Art galleries in Elba Island and around
♥   Art museum 'Archaeological Museum of Populonia' Piombino, 26 km from the center. On the map

Cathedrals and basilicas near Elba Island
♥   Basilica Cattedrale di S. Maria Assunta, Volterra, 84.3 km from the center. On the map

Excursions over cultural sights of neighbours of Elba Island

Bastia
When it comes to museums, the History Museum of Bastia is the largest venue of its type that has prepared much interesting information for its guests. The museum has a permanent exhibition that is divided into three parts – intellectual and artistic heritage of the town, political and economic influence, and town planning. Bastia has a rich history as it was the capital of ... Open »
Livorno
Another historical monument that has managed to survive in wartime is Chiesa Di Sant'Andrea. It was erected in the middle of the 19th century in the neo-Gothic style typical of that time. The church was erected on the initiative of the local Scottish community, which lived in Livorno at that time. The chief architect of the project was the famous Scottish specialist Rumball. ... Open »
Tuscany
An interesting historical monument is the medieval castle of Castello Guidi that has perfectly preserved to this day; it is of great interest from an architectural point of view. Currently, it is home to the Museum of Leonardo da Vinci. Tuscany is famous for its incomparable religious monuments; the Siena Cathedral is the greatest among them. This is the true embodiment of ... Open »
Siena
In the center of city there is the Campo Square, the starting point for many sightseeing tours. The design of the square is very unusual; some interesting explanations about it would wait for travelers in the tour. One of the most unusual architectural monuments of the town is the Torre del Mangia, whose age is more than five hundred years. The central part of the tower is ... Open »
Lucca
The permanent city symbol is the Cathedral placed in the heart of he Lucca city on the San Martino Square. The construction of the upscale building started in the 6th century and only two centuries later the small church obtained the status of cathedral. And in 780 the cathedral turned home to religious sanctity – the relics of Saint Regulus. The cathedral is attended today ... Open »
Corse
In 1975, archaeologists discovered an interesting historical site, which was named Filitosa. Settlements of ancient people were located here in pre-historic era. Today the site is free to the public and is very popular among tourists. In the historic parkland you could see stone houses of local settlers, ancient fortifications and even carved stone statues that were erected by ... Open »

Culture guide to Elba Island. Which fascinating sights to visit once you are in Elba Island: temples, churches, museums, theaters and castles. Recommendations (with addresses, phone numbers and links) on the places 'must visit' in Elba Island. Plan your own city excursion by using this page info!