Detailed hi-res maps of La Rochelle for download or print 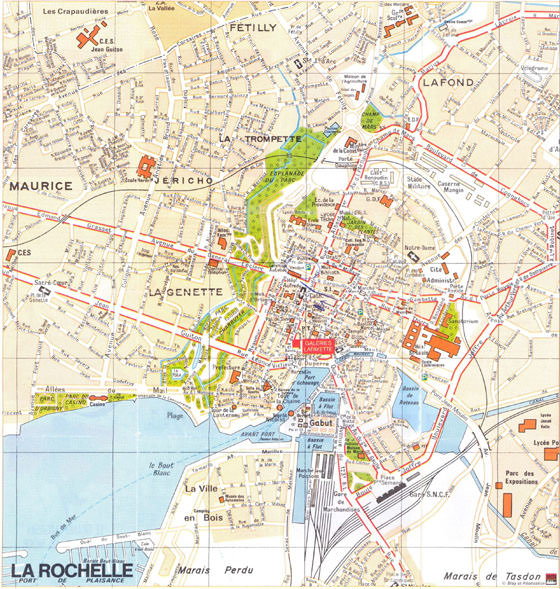 Search for services, infrastructure and sights on map of La Rochelle

Our guide chapters over La Rochelle

La Rochelle for children - what to visit

For those who prefer a more relaxed and measured entertainment, it is worth visiting the Mini-Golf Du Mail. Its visitors have available for them, excellent playgrounds for playing mini-golf, which even children can play well on. This entertainment center is located on the territory of a picturesque park and is much oriented to young children. In the warm season, a mass of inflatable rides and carousels set in the … Open

Ile de Re Chocolats & Caramels with its huge selection of sweets is a godsend for those with a sweet tooth. It sells beautifully shaped chocolate in gift packaging, you can buy various kinds of chocolates in bulk, as well as locally made caramel. Despite the huge popularity of the store, the prices always remain at an affordable level. For the best local delicacies go to Le Gout de la Vie, which is … Open

3. Tourists should note that they can visit city's major attractions (the Orbigny-Bernon Museum and three towers) on a single ticket. You can learn about details in the tourist center and at the tour desk in the hotel’s territory. 4. Local residents have a welcoming and responsive attitude toward foreigners. Travelers should consider a few standard rules of behavior. When entering into a public … Open

In La Rochelle, you can ride a helicopter, which will definitely appeal to those who want to reach the sky-high adrenaline levels and unique experience. You can also ride graceful horses, and all it takes is to visit Ecuries de la Hallerie. Small tourists enjoy this pastime more than others so this equestrian club should not be missed when traveling as a family. However, the same can be said about Grande Roue La … Open

In the heart of the historic district, you can see the building of the old town hall. Its construction began in 1595 and lasted for 11 years. The town hall is a spectacular example of architecture in the Renaissance style. Not only the building itself, but also the defensive wall surrounding it has survived up till now. It has long lost its original value of the building of the city government. Now it houses one of … Open

The festival program usually lasts 6 days, more than thirty years ago the music festival was held for the first time. All these years, La Rochelle is a permanent venue for the festival. Open-air stages are set up for musicians on the city streets and squares. Every concert attracts thousands of spectators, as many world-famous performers take part in the festival today. Young musicians also perform on the same … Open