Detailed hi-res maps of Tours for download or print 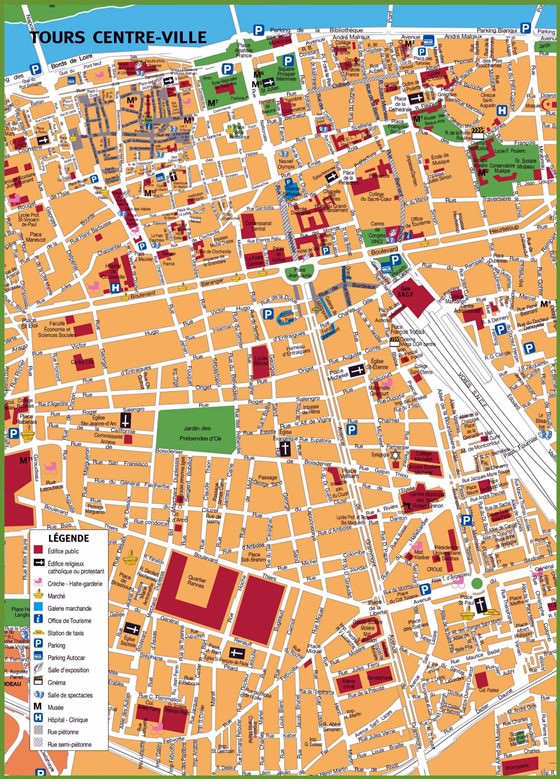 The actual dimensions of the Tours map are 1765 X 2454 pixels, file size (in bytes) - 1149905. You can open this downloadable and printable map of Tours by clicking on the map itself or via this link: Open the map.

Search for services, infrastructure and sights on map of Tours

Our guide chapters over Tours

Another important attraction of Tours is located on the Place Plumereau; we are talking about the old Basilica of Sant-Martn. Named after the patron saint the basilica attracts pilgrims and curious tourists from all over the world. The undisputed symbol of the city is the beautiful Plessy-les-Tours Castle housing the Museum of Wax. For 20 years it was the principal residence of Louis X. Many interesting legends and … Open

The beautiful abbey of Marmieu was founded in the 4th century. St. Martin of Tours was its founder. Locals consider him the patron saint of winemaking. The ancient abbey is an outstanding religious monument for them. The old monastery was badly damaged in the 9th century during the invasion of the Normans. However, it was completely restored. Already in the 11th century, it was considered one of the richest … Open

Maps of Nantes
He decided to organize short concerts, the duration of which wouldn't exceed 45 minutes, and make tickets as cheap as possible. In a matter of years, the festival has gained immense popularity, and now its program covers as many as five days. Concert venues located in Nantes can no longer ensure the full implementation of the program, so some surrounding cities take part in ... Open »
Maps of Limoges
For travelers with little tourists, it would be interesting to visit Limoges at the end of May, when such a colorful festival as the Marché de Pâques takes place in Jardin d'Orsay along with Easter. Colorful parades of people dressed in children's favorite heroes are organized for kids, interesting competitions are held in the markets. Before Easter, young travelers are ... Open »
Maps of Versailles
Dresses were an important part of the court etiquette. Everyone had to dress appropriately, especially for the Grand Couvert. Women put on fancy dresses and men attached swords to their outfits. If someone had to sword, he could even rent one in Versailles. Finally, in order to enter or leave a room, nobility had to wait for an usher to open the door. As only ushers were ... Open »
Maps of Nevers
Nevers residents are also known for their passion for traditional gastronomy. They rarely visit restaurants specializing in any foreign cuisines. Even when it comes to French restaurants, they give preference to those serving traditional Burgundy dishes. The most important components of their daily diet are fresh bread and cheese, and dinner is almost never complete without a ... Open »
Maps of La Rochelle
In July, the city holds the traditional music festival Francofolies, whose name can be translated as “French madness”. French-speaking musical bands play music within the framework of this festival, performers of various styles are invited to the event. The festival program usually lasts 6 days, more than thirty years ago the music festival was held for the first ... Open »
OrangeSmile.com - online travel reservation expert providing reliable car rental and hotel booking services. We feature more than 25.000 destinations with 12.000 rental offices and 200.000 hotels worldwide.
Secure Server