Detailed hi-res maps of Limoges for download or print 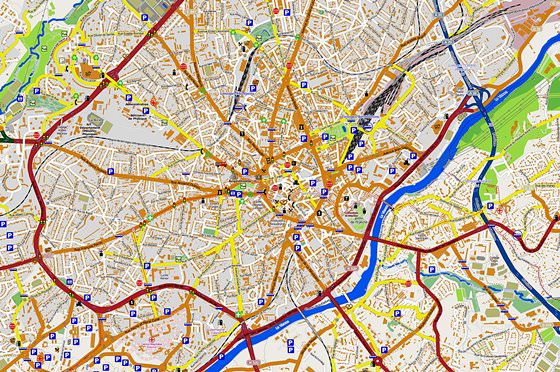 The actual dimensions of the Limoges map are 1750 X 1162 pixels, file size (in bytes) - 929545. You can open this downloadable and printable map of Limoges by clicking on the map itself or via this link: Open the map. 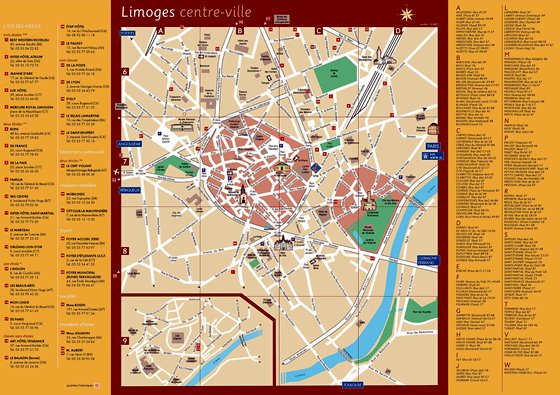 Search for services, infrastructure and sights on map of Limoges

Our guide chapters over Limoges

In the warmer months, another attractive amusement park is open near Limoges - Tarz en Arbres. It is a large rope town built within a vast forest. Here you can try out well-liked bungees, rope bridges and other original attractions, many of which are suitable not only for children but also for adults. The park also has well-equipped picnic places and many interesting places for walking. Many rare species of trees … Open

In Limoges there are more than two hundred restaurants and cafes. Budget travelers and discerning gourmets, as well as those who prefer to go for dinner as a family could find a suitable dining place. One of the most prestigious institutions of the city is the Le Boeuf a la Mode restaurant specializing in French cuisine. The restaurant features luxurious decor of room and beautiful furniture that can be seen … Open

Limoges is often called the cradle of fire arts; such an unusual name is due to the fact that in the Middle Ages the most original and unique types of crafts have flourished in the city. One of them is production of pitted enamel. In the 15th century, local enamellers have made dishes and decorations of incredible beauty. Traders from different countries came here in search of outlandish product that hadn’t … Open

Also in the historic district, there is the beautiful Chapel of St. Aurelien of the 14th century with a unique interior decoration. Walking along the historic street, you can go to the Mott Square, which has existed in this place for several hundred years. Several times a week, there is an interesting market on this square, where you can buy popular products from locals and interesting souvenirs. Not far from the … Open

Limoges for children - what to visit

Another great place to relax with children is the Parc ZOO du Reynou. This zoo is very beautiful, has a lot of greenery and ponds in which swans swim. Among the inhabitants of this zoo are tigers, giraffes and monkeys. You can also find cute raccoons living here which visitors are allowed to feed. The territory of the zoo is equipped with a farmyard where children can communicate with the friendliest species of the … Open

Limoges offers a lot of interesting places for shopping. One of the most attractive is the market Les Halles Centrales. It is the main grocery market in town and is housed in a very beautiful historic building dating back to 1889. Here, customers are presented with a wide selection of fresh seafood, deli meats, cheese and dairy products, as well as fresh pastries and sweets. The latter are especially popular with … Open