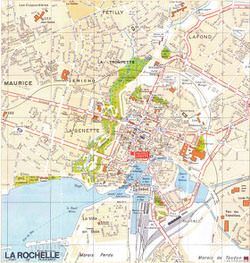 Interactive maps of hiking and biking routes around La Rochelle

1. You can zoom in/out using your mouse wheel, as well as move the map of La Rochelle with your mouse.
2. This interactive map presents two modes: 'Biking Routes' and 'Hiking Routes'. Use the '+' button on the map to switch between them.

This La Rochelle map has two modes: 'Railway Network' and 'Landscape & Rural Map'. Use the '+' button on the map to navigate.

Our guide to La Rochelle

The festival program usually lasts 6 days, more than thirty years ago the music festival was held for the first time. All these years, La Rochelle is a permanent venue for the festival. Open-air stages are set up for musicians on the city streets and squares. Every concert attracts thousands of spectators, as many world-famous performers take part in the festival today. Young musicians also perform on the same … Open

The Museum of Natural History is located in an equally impressive historical building. It is one of the oldest in France. The museum exhibits occupies an area of ​​about 2,500 square meters. Here are the most diverse collections: rare samples of minerals, interesting ethnographic artifacts from various parts of the world, ancient research equipment and skeletons of ancient animals. This museum is very … Open

La Rochelle for children - what to visit

The city has several modern entertainment centers. With children of school age, you can visit the center Laser Game Evolution La Rochelle. It offers its clients excellent playgrounds for laser games. The center is well equipped and provides visitors with the most first-class equipment. It is very popular among travelers with children and young people. You can have a wonderful time here with the whole family or have … Open

Ile de Re Chocolats & Caramels with its huge selection of sweets is a godsend for those with a sweet tooth. It sells beautifully shaped chocolate in gift packaging, you can buy various kinds of chocolates in bulk, as well as locally made caramel. Despite the huge popularity of the store, the prices always remain at an affordable level. For the best local delicacies go to Le Gout de la Vie, which is … Open

3. Tourists should note that they can visit city's major attractions (the Orbigny-Bernon Museum and three towers) on a single ticket. You can learn about details in the tourist center and at the tour desk in the hotel’s territory. 4. Local residents have a welcoming and responsive attitude toward foreigners. Travelers should consider a few standard rules of behavior. When entering into a public … Open

Have a great time tasting local wines, learning a lot of interesting facts about its production and proper drinking - all this can be done in Le Collège du Vin. When it comes to spas, it's worth noting Le Comptoir du Soin and Au Spa offering a wonderful rest in their baths and massage rooms. Those who wish to spend time with their friends actively are advised to go to Laser Game Evolution La Rochelle and play … Open