Detailed hi-res maps of Aquitaine Region for download or print 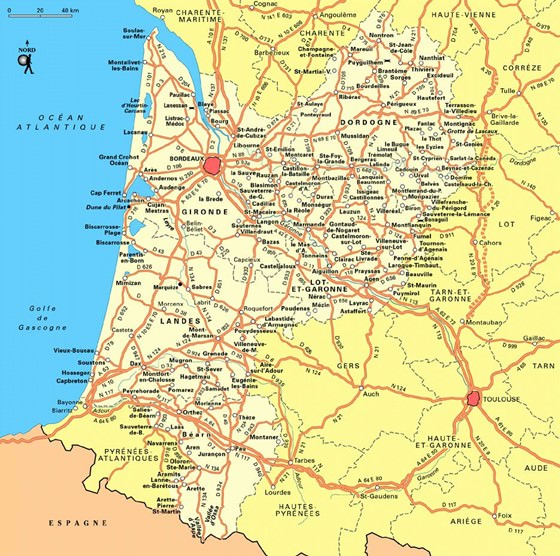 The actual dimensions of the Aquitaine Region map are 936 X 929 pixels, file size (in bytes) - 244821. You can open this downloadable and printable map of Aquitaine Region by clicking on the map itself or via this link: Open the map.
Aquitaine Region - guide chapters 1 2 3 4 5 6 7 8 9

Search for services, infrastructure and sights on map of Aquitaine Region

Our guide chapters over Aquitaine Region

Pyla dune is the unique natural landmark of Aquitaine. This sand dune of 104 meters high is the biggest one in Europe. It's located close to Arcachon bay beaches and offers an excellent panoramic view over surrounding area. Bird Island is a must see place for nature enthusiasts. It's a beautiful wildlife sanctuary protected by government. This scenic island houses dozens of bird species including rare ones. Despite … Open

If you are in Aquitaine during a warm season, from April to October, visit the famous Cordouan Lighthouse. It is the oldest lighthouse in Europe. The lighthouse, built in the late 16th century, amaze with its beauty. What is interesting – the position of the “Sea Notre-Dame Cathedral” keeper is still not abolished. Another beautiful lighthouse is in Biarritz. It was built in the middle of the 19th century and … Open

Travelers looking for secluded rest and willing to enjoy nature of the region may prefer Golf du Medoc Hotel et Spa hotel. This brand new hotel located in Le Pian Medoc area offers its guests excellent opportunities for quiet rest. Guests of the hotel can walk around scenic landscapes, spend time at one of the golf-centers or dedicate vacation to health care. Golf du Medoc Hotel et Spa has stylish interior and … Open

Aquitaine is world-famous for its beautiful and well-maintained beaches. But there is more to it, than just sunbathing all day long. Aquitaine is a true Mecca for surfers and divers. The swells from the north- and south-east will bring joy not only to the beginners, but for trained riders as well. The best surfing place in Aquitaine is Capbreton. Here you can also dive and explore the underwater Gouf canyon, which … Open

A unique peculiarity of Aquitaine is a distinct difference in gastronomic preferences of people from different departments. For instance, Dordogne is practically filled with the smell of foie gras. They produce and consume this delicacy in huge amounts. Although, this well-known dish, made from liver, is not the only thing to try at the local restaurants. River fish, baked chestnuts, truffles, a unique variety of … Open

If you want to get the maximum pleasure from your vacation in Aquitaine, consider some peculiarities of French mentality in communication with the locals. First of all, be ready, that the French don’t like to speak English, and not many people actually know it. It seems that the French learn respect for themselves and their homeland from the mother. Sometimes it evolves into arrogance towards the people from … Open