Detailed hi-res maps of Verona for download or print 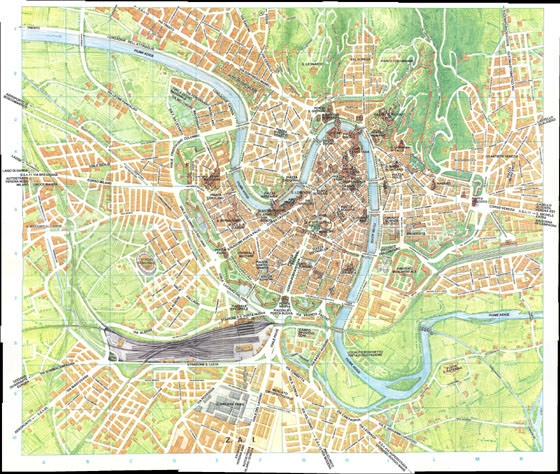 The actual dimensions of the Verona map are 3040 X 2572 pixels, file size (in bytes) - 1595396. You can open this downloadable and printable map of Verona by clicking on the map itself or via this link: Open the map. 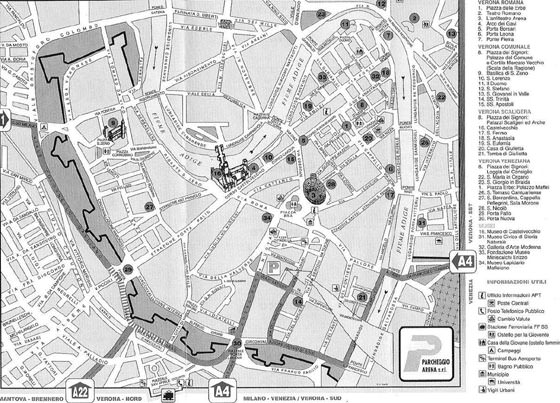 Search for services, infrastructure and sights on map of Verona

Our guide chapters over Verona

Prestigious Hotel Antica Porta Leona invites tourists to organize an unforgettable stay in a romantic setting. Several of its rooms are designed specifically for honeymooners, they feature a huge colonial-style bed with a translucent white canopy. The hotel was opened in a restored 15th-century building. In a hall with a vaulted ceiling on the ground floor, there is a very beautiful swimming pool. In addition, … Open

Festivals and events in Verona

Italians are famous for their love for pleasures, and one of these pleasures is food. Well, you should never deny yourself this. And therefore gastronomic festivals held in the country always attract a lot of visitors. They include Vinitaly taking place in the middle of April. The main city streets become the venue for the event, and many local restaurants are happy to join it. Vinitaly's program includes wine … Open

In addition to luxury suites, the hotel has another attractive characteristic - a rich history full of remarkable events. Among the hotel's famous guests Goethe and Mozart, as well as Louis XVII of France who stayed at the hotel during the exile. This is where its secret coronation took place, which was only known to a narrow circle of people. The luxurious hotel is still popular among world celebrities. Thus, … Open

The city has a lot of truly unique museums. Of course, first of all, it is worth noting the "calling card" of the city - Casa di Giulietta, next to which stands the above-mentioned monument to the protagonist of the Shakespeare's tragedy. Archeology buffs go to Museo Archeologico and Museo Archeologico al Teatro Romano, and those who wish to "touch the history" - to Museo di Castelvecchio. Museo Civico di Storia … Open

2. There is a tourist office next to Porta Nuova railway station. You can obtain a free map of the city there. The map is very useful as it shows all public transport routes and throws the light upon the upcoming cultural events. 3. Buses remain the main form of public transport. Tickets must be purchased in advance. They are sold in all newspaper and tobacco kiosks. As a rule, tickets vary in … Open

Hotels with history of Verona

A true embodiment of the culture of past centuries is Hotel Colomba dOro, which is just a couple of minutes walk from the Verona Arena. It occupies a unique building of a medieval monastery where a chic finish of stone and wood, as well as wonderful frescoes, have been restored during the reconstruction. Luxurious rooms are decorated taking into account the good old traditions - they have huge wooden beds with … Open