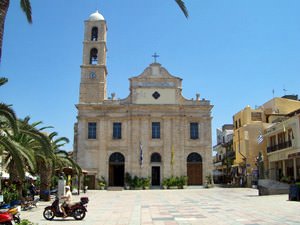 Life on Crete is very steady and easy. From the very first days tourists will be impressed with calm and harmonious feel. There is no usual urban rush here, but it may take some effort to adapt. It takes a while to get an ordered meal at the restaurant. Punctuality isn’t Cretan strong suit; citizens used to be late for meeting. On the other hand, locals are very considerate and reliable. If they promise something, they will do it for sure.
Cuisine of Crete for gourmet with top restaurants and cafe
Many travelers associate Cretan cuisine, primarily, with excellent wines. Indeed, local drinks deserve the highest praise. You can taste popular wines literally at any restaurant and bar of …

Open
Christianity is the dominant religion at Crete. Religious holidays play important role in daily life there. Grand celebrations take place on Christmas Eve and Easter. Tourists visiting Crete at these holidays have an excellent chance to attend interesting fairs and culinary events, music concerts and shows.
Wine is the local traditional drink. Not a single holiday comes without it. Many families make their own wine using antique recipes passed from one generation to another. A lot of connoisseurs and gourmands dream about tasting these real Cretan home-made wines. Wine festivals take place at almost every town at Crete. Different cities have different traditions, but the most impressive is one at Rethymno city. It usually takes place on last week of July. Copyright www.orangesmile.com
Excursion over cultural sights of Crete - 'must visit' points of interest
Crete prime treasures are antique landmarks, and tourists from all over the world come to see them. Travelers have to include the Akrotiri-Khania Peninsula in their excursion program, as …

Open
Main festival venue is Municipal Park. Special stages and children rides are built there for the festival time. Even though festival program is getting more and more diverse, the primary event of the entire festival is wine testing. Speaking of Crete's traditions it's worth to mention local markets. Those aren’t just shopping venues, but also the best place to meet friends and relatives. Lots of people come here to chat, others are attracted by huge variety of goods offered. The best known Crete's market is the Heraklion Central Market. Here you can buy jewelry, handcrafted items, fresh food, local sweets and wines. 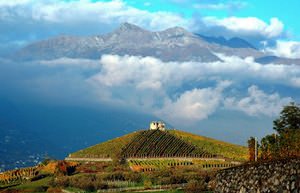 One of the most interesting festivals in Crete is held in the village of Matala when the latter becomes the hippie capital at the end of June. We are talking about Matala Beach Festival taking place on the beach. Parties to the music of Bob Marley and John Lennon, performances of bands from all over the world playing covers of well-known hits, crafty fairs with hand-made products (of course, the bulk of products is all kinds of baubles), fun, peace, love are all present at the hippie festival. The place is not chosen by chance: back in the 70s, young people gathered here and did the same throughout the year. Today, they have three days for that.
Your active city break in Crete. Attractions, recreation and entertainment - best places to spend your day and night here
Every city on Crete offers a variety of entertainment, beautiful beaches and vivid markets. Located at the city of Hersonissos, Aquaworld Aquarium represents a great variety of sea …

Open
In the middle of July, it is worth visiting the village of Frapsano near Heraklion when a colorful festival called Frapsanioti Angioplasty is held here. It is dedicated to the art of pottery - and that is what the region is famous for. It should be noted that here you can not only learn how to make pots but also listen to quality music. Tzermiado becomes relevant in late August. It is situated near the Diktaean Cave, which is often referred to as the “Cave of Zeus” - according to ancient Greek mythology, it was here that Rhea gave birth to the future king of the gods. A festival in Tsermiado is a fair and the main product here is potatoes. However, it cannot do without folk dances, music and theatrical performances. 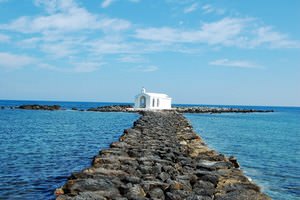 Crete has several festivals devoted to folklore and traditional music of the island - and such events are of great interest to travelers wishing to get to know the local culture better. These include a three-day festival known far beyond Greek borders, which is held in the village of Chudetsi (located near Arhanes in the province of Heraklion). Traditional Cretan instrumental music, folk dances, national cuisine - what could be better for those who want to get acquainted with the multifaceted local culture? Maybe only the fact that it is held at the beginning of hot August when the weather is excellent.
Advices to travellers: what you should know while being in Crete
1. Fans of beach rest are recommended to go to Crete in the period from May to October. At this time weather is the most suitable for water activities. Those, who want to enjoy nature, would …

Open
Another festival dedicated to the island's musical culture is held almost simultaneously with a festival in Chudetsi (in contrast to the latter, it lasts for one day), the location is Chania. It is dedicated to Cretan music but in the context of today's world - thus, you can hear folk songs in modern arrangement. As well as buy souvenirs and taste local food. Among the festivals dedicated to prominent events in the history of Crete, it is worth highlighting a celebration held from November 7 to 9 in the Arkadi Monastery (Ιερά Μονή Αρκαδίου). The event is devoted to the Cretan revolt of 1866-1869. When it became clear that the rebels would be defeated by the Turks, local residents chose to blow up the arsenal - but not to surrender to the enemy. They say that the explosions during the uprising were so strong that they were heard even in Heraklion. 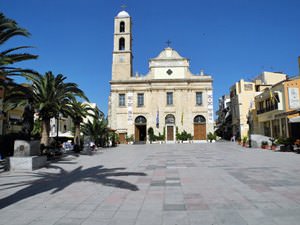 Many tourists are equally interested in music festivals, most of which take place on the magnificent Cretan beaches during the summer season. Among the most famous ones is the Chania Rock Festival that falls at the end of June. Harsh metal and rock guitar riffs that can be heard on the ruins of the San Salvatore bastion fascinate all music fans. At different times, such famous teams as Sabaton, Kreator, Soulfly performed at the festival. Every year, organizers try to surprise rock and metal fans with new interesting names in the headliner list. The end of July is marked by the Mediterranean Festival in Sitia, where, in addition to the musical program with the participation of stars from other corners of the world, one can enjoy fine art exhibitions and attend a fair.
Best beaches and recreation areas around Crete
On the southwest coast of the island you can find the most beautiful and popular beach, Elafonisi. It is covered with sand of unusual pink color, due to which water has saturated blue shade. …

Open
Throughout August, a festival dedicated to contemporary music is held in the village of Avdu (near Krasi). Every weekend, on the central streets of the city, you can hear live performances of local and foreign musicians, taste local dishes and wines. At the end of July, another music festival is taking place, and this time the venue is the village of Anoia. Here they celebrate Balkan music and dance, among the participants are both Greek bands and those who came from Bulgaria, Serbia, Romania and other countries of the Balkan Peninsula. 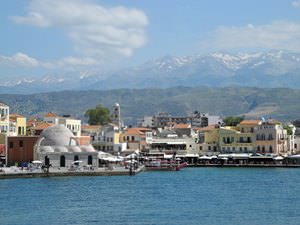 One of the most spectacular carnivals in the whole of Crete is the Apokries that is held in February or March (depending on the date of Easter). The festival is widely celebrated, while the most colorful events take place in Rethymno. Costumed parades, games, street parties, singing traditional Cretan serenades, theatrical performances, and dances - all this can be seen at Rethymno carnival. Another holiday widely celebrated in all towns and villages is May 1 - the festival of flowers and wreaths, during which locals go out into the countryside, collect plants to weave beautiful wreaths. After that, the wreath becomes the decoration of the front door of the house. The central streets of the city are also decorated with wreaths so the festival is sure to please those looking for aesthetic pleasure.

This guide to traditions and festivals in Crete is protected by the copyright law. You can re-publish this content with mandatory attribution: direct and active hyperlink to www.orangesmile.com.
Crete - guide chapters 1 2 3 4 5 6 7 8 9 10 11

Survived castles around Crete
♥   Castle 'Fortifications of Heraklion' Heraklion, 23.9 km from the center. On the map

♥   Castle 'Fortezza of Rethymno' Rethymno, 43 km from the center. On the map

Colors of Crete in photos

Traditions and festivals in cities around Crete

Heraklion
Heraklion is known for its numerous tourist attractions and natural beauty. However, besides its rich historical heritage this picturesque old city is home to several national symbols. The culture of the local people is very original and it is reflected in all aspects of life. Many travelers associate Heraklion with excellent olive oil, which is actively used not only in ... Open »
Agios Nikolaos
Life in the city is measured and unhurried. It seems that nothing can force the Greeks to hurry up and devote all their energy to work and solving problems. In local cafes and restaurants visitors quite often need to wait for a long time to get their order. At a glance this might look like a sign of disrespect. However, in reality such situation is considered normal - local ... Open »
Santorini
Despite a powerful impact of the contemporary culture local folks have managed to preserve numerous pagan customs and traditions which are best exemplified with the relations of local people with God. Traditionally before addressing to the God with a request for help a generous gift should be made. The most popular type of the gift is “tama” being a small size plate made of ... Open »
Folegandros Island
While communicating with Greeks remember that some of the gestures have a different meaning in this country. Nodding doesn’t mean that a person agrees with you. The Greek way to signal “yes” resembles the Americans' “no” gesture. A Greek “yes” is tilting the head to either side and making a sideways motion while slightly closing the eyes. They raise their ... Open »
Ios Island
It is customary to greet everyone in a tavern, shop or bank. It is customed to shake hands only at the first meeting. Then, people greet each other with a kiss on the cheeks. People usually refer to each other by the second name here. Locals are very hot-tempered people. They use a lot of hand movements, raise their voice and interrupt each other. The most important ... Open »
Sifnos Island
During the feast, the Greeks are quite relaxed, not trying to comply with all the rules of etiquette. It is quite normal to talk during meals, accidentally push a neighbor or sip the sauce while searching for the desired dish. All this is offset by the sincerity and openness to each other. In general, the Greeks believe that you should not deceive your neighbor and try to ... Open »

Cityguide on traditions, mentality and lifestyle of people in Crete. Learn the best periods to visit Crete to discover its soul - authentic festivals, events and celebrations. We will also reveal the interesting habits, attitude towards the world and to tourists in Crete.