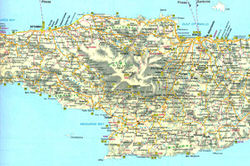 Interactive maps of hiking and biking routes around Crete

1. You can zoom in/out using your mouse wheel, as well as move the map of Crete with your mouse.
2. This interactive map presents two modes: 'Biking Routes' and 'Hiking Routes'. Use the '+' button on the map to switch between them.

This Crete map has two modes: 'Railway Network' and 'Landscape & Rural Map'. Use the '+' button on the map to navigate.

Our guide to Crete

Festivals and events in Crete

Throughout August, a festival dedicated to contemporary music is held in the village of Avdu (near Krasi). Every weekend, on the central streets of the city, you can hear live performances of local and foreign musicians, taste local dishes and wines. At the end of July, another music festival is taking place, and this time the venue is the village of Anoia. Here they celebrate Balkan music and dance, among the … Open

Heraklion is no less popular with tourists who want to spend time actively. Thus, here you can find EscapeRooms.Gr Club, which is considered to be the best escape room center in all of Crete. Among its rooms are those ones suitable for beginners and experienced players. It is worth noting that the club has several rooms for horror fans. Get great experience playing laser tag or paintball in Lampogialo, and to try … Open

8. Shoppers are recommended to visit Crete during seasonal sales; those are usually held in January, May and October. At that time, you can purchase great goods at discounted prices in shopping malls and at markets. 7. In restaurants and cafes customers have to leave a tip. In small budget restaurants and cafes 1-1.5 euros would be enough, and major restaurants usually require tip making out 10% of … Open

One of the most attractive among sandy beaches is Kalamokanias; it is rather large and well equipped. Strong trees grow right on the coast, so you can take refuge in the heat of the day at the shade. There are popular hotels and apartments next to the coast. Travelers who will rest in Heraklion should pay attention to the sand and pebble beach Paleokastro. It is wild and devoid of any equipment; however, this scenic … Open

Literally every city in Crete has markets, one of the largest and most interesting markets is located in Chania and called Agora Marketplace. Here you can stroll through the rows for hours admiring carefully laid out fruits and seafood on the shelves. A lot of interesting souvenirs are also available here. When it comes to edible souvenirs, tourists most often buy honey and canned olives. Women are primarily … Open

Crete for children - what to visit

The largest aquarium on the island is the Cretaquarium. Besides miniature colorful fish, you can see huge sharks, octopuses, rays and other exotic inhabitants of the sea depths here. They are very remarkable to watch. This aquarium presents a large collection of sea turtles. Next to the large aquariums are equipped comfortable recreation areas where you can sit and watch the fish. The most appealing museums for … Open