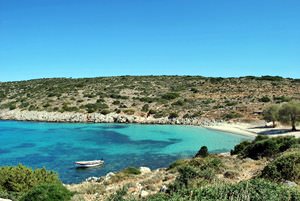 One of the most monumental buildings of the capital of Chios is the Castle of Chios. The castle was constructed in the medieval period with its first construction phase having started in the 10th century by the Byzantines. It was built to defend the island from pirates and hostile neighbours. Every leader tried to reconstruct and expand the building. This structure survived the massacre in 1822 and the devastating earthquake in 1881.
Shopping in Chios Island - main shopping streets, outlets and boutiques
A bottle of olive oil is one of the most remarkable and traditional Greek souvenirs. Greek have been using this product for several thousand years and they masterfully produce this product. …

Open
Be sure to visit Agios Iakovos Church, Giustiniani Palace local museums with very interesting exhibitions. Chios Archaeological Museum has a rich collection of historical finds, some of them date back to prehistorical times. Byzantine museum holds a collection of restored household items. There is also a collection of various works of art in the museum. The Ethnographic Museum of Chios will introduce you to the traditions and customs of the locals. Moreover, don’t pass by the Argenti Folklore Museum and Chios Maritime Museum.
Don’t miss a chance to visit Nea Moni monastery, which was built in the 11th century is situated in the suburbs. The monastery was built with funds given by the Byzantine Emperor Constantine IX. The building is considered to be a UNESCO World Heritage Site. Agios Minas and Panagia Sikelia are famous Chios monasteries, which are situated not far from Nea Moni. Volissos is a town that has not lost its medieval charm and almost hasn’t been reconstructed. However, its ancient history is much more interesting. Scientists believe that legendary Homer lived, worked and mentored young poets for many years at that exact place. You can find a very colourful monastery of St. Markella near the city. Copyright www.orangesmile.com
Guide to Chios Island sightseeing - things to see and to visit
The Greek island of Chios is located in the Aegean Sea, near Anatolia. For many years it has been left out in the cold by foreign travelers. However, Greeks preferring solitude and peace …

Open
Mesta, Olympi, Vessa, Kalamoti and Pyrgi are medieval fortified villages, raised here in the Middle Ages in order to protect against pirates. However, the villages are interesting not only as monuments of the middle ages. In Pyrgi, for example, the houses are decorated with a unique ornament, in a certain "scraped" way. Locals believe that the technology was brought from Turkey or Byzantium, but nobody knows for sure. 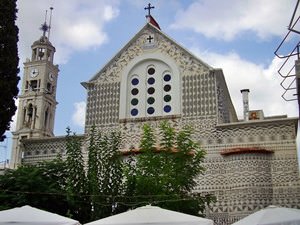 Don’t miss the chance to visit Kambos, picturesque suburbs of the capital. Italian aristocrats settled here in the past, so you can see a great number of luxurious mansions. Anavatos is a deserted village. It is quite impressive as it plunges into a large granite rock at the top of the cliff. There are the ruins of the Byzantine castle Apolichnon near Armolia.
Family holidays with kids in Chios Island. How to entertain your child, things to show to children.
One of the largest Greek Islands, Chios, is known for its mastic thickets, monuments of medieval architecture and magnificent views. Children will definitely love the island. They can swim …

Open
It is worth visiting the monastery of St. Markella. She was born on Chios and is considered to be the patroness of the island. There is a spring near the monastery. According to the legends, Markella was martyred at that place. Locals believe that water of the spring has healing properties. You can see the ruins of an ancient Acropolis in Emporios. Those who are interested in architecture should visit Kardamyla, the monastery of Zoodohos Pedhe and the Church of Panagia Krina in Baviloi.

In the section below, you can get one of our excursion, activities or city discovery tours over Chios Island and surroundings. Our website offers 10-30% lower ticket prices, when compared to the offline purchase on the spot.

City tours, excursions and tickets in Chios Island and surroundings

This guide to cultural sights Chios Island is protected by the copyright law. You can re-publish this content with mandatory attribution: direct and active hyperlink to www.orangesmile.com.
Chios Island - guide chapters 1 2 3 4 5 6 7 8 9 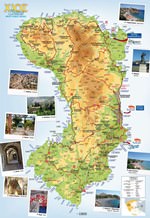 Excursions over cultural sights of neighbours of Chios Island

Lesvos
Now the fortress is located on the territory of an important archaeological area, where scientists haven’t stop working for many decades. You can see what they've found in the Archaeological Museum; its collection is updated with new exhibits literally every day. The church of Agios Ferapon is one of the few religious sites that have managed to preserve to this day in their ... Open »
Mitilini
In the center of Mitilini, there is an interesting religious monument, the Church of St. Ferapont. It was built in the 19th century and serves as an important culture center now. In the church, there is the Byzantium Museum. Its collection of artifacts is very extensive. Here, you can see old weapons, church utensils, and historical artifacts dating back to the Byzantium ... Open »
Ikaria Island
Be sure to visit Kambos. It is a relatively small village nowadays. But large and important settlements like Greek Oinoe, Roman Odeon and Byzantine Dolihi. Dolihi was the capital of the island for a long time. If you come to the settlement, you will see ancient buildings as well as modern houses where local inhabitants live now. The ruins of Oenoe and Odeon remains are ... Open »
Izmir
During your walk down Ataturk Caddesi Street you can go to Republic Square and then reach to Trade harbor. This is a beautiful area numerous modern buildings, among which you will find several major shopping malls and the building of Stock Exchange - a true example of modern architecture. Many unique historic sites are located in the district with the mysterious name Roman ... Open »
Samos Island
There is a beautiful monastery in a dozen kilometres from Samos. It is called Zoodochos Pigi. On your way to the monastery, you come across one more attraction- the monastery of Agia Zoni with a functioning church. The oldest Christian Church on the island is Metamorphosis near Karlovasi, it was built in the 11th century and almost haven’t changed. Be sure to visit Milos ... Open »
Samos
All the priceless findings of scientists are collected in the Archeological Museum of Samos which is by now one of the most visited cultural establishments of the island. The capital of the island, the city of Samos, features plenty of cultural establishments and objects of historical significance. City guests should necessarily visit the Natural History Museum which is located ... Open »

Culture guide to Chios Island. Which fascinating sights to visit once you are in Chios Island: temples, churches, museums, theaters and castles. Recommendations (with addresses, phone numbers and links) on the places 'must visit' in Chios Island. Plan your own city excursion by using this page info!