«« BEGINNING - PART I
Video of flights over top monuments of Sevilla in HD format.
Use 'Full Screen' mode.
Any guide of Sevilla would be incomplete without a review of its most impressive architecture monuments - Seville Cathedral, Hotel Alfonso XIII, Plaza de Toros de la Maestranza, Royal Tobacco Factory, . It’s difficult to overestimate their historical and cultural importance for Spain. The style and architecture of any of these landmarks are worth a visit when you are on vacation in Sevilla. However, you can virtually visit any of these wonderful monuments without leaving your comfortable chair. For that purpose, simply 'fly' over the 3D model of Sevilla that was created by OrangeSmile and GoogleEarth. All you need to do is to click the video on this page. 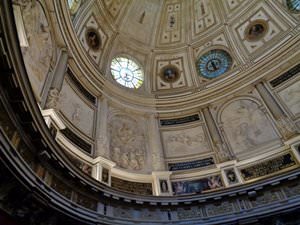 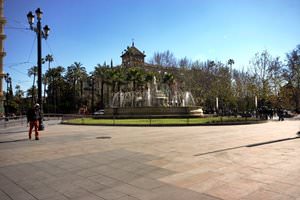 Facts:
» Hotel Alfonso XIII is one of the most prestigious hotels in Spain.
» The hotel has an outdoor pool, a gym and a beautiful courtyard with a fountain in the garden.
» The inner side of the hotel is decorated with numerous Arabic-style arches. Interior is decorated with tiles.
» There is a restaurant, where visitors can enjoy modern Lebanese cuisine, next to the pool.
» The courtyard of the hotel also features a restaurant that serves traditional dishes of local cuisine for breakfast, lunch and dinner.
» The hotel is situated on the edge of the historic district of Santa Cruz. Not far away there is one of the main attractions, Seville Cathedral with the Giralda bell tower. 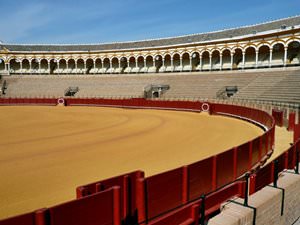 Facts:
» Plaza de Toros de la Maestranza is the oldest bullring in Spain. It’s considered one of the most amazing in the country and the most famous in Spain.
» Plaza de Toros de la Maestranza accommodates about 14,000 spectators.
» Its construction has begun in the middle of the 18th century and the subsequent 120 years the structure has being altered and complemented. Today it represents Baroque style; the building of white and gold colors features stucco and enfilades making it a real masterpiece of architecture.
» Anyone can order a guided tour around the corrida museum inside the bullfighting arena. Visitors of the museum can learn about the history of bullfighting in Seville, the traditions and the basics of bullfighting, and famous matadors performing on this historic arena.
» The museum consists of four rooms, which display posters, portraits and photographs, as well as costumes of matadors and bullfighters. The most interesting item in the museum is a cloak that is painted by Pablo Picasso.

Facts: » The Royal Tobacco Factory is the Europe's first tobacco factory.
» The factory building constructed in the 18th century is one of the most brilliant samples of industrial architecture of the pre-revolutionary era.
» The complex of Royal Tobacco Factory in the second largest in Spain after the Monastery of El Escorial located an hour's drive from Madrid.
» In the 19th century, this factory was producing at least three quarters of all European cigars.
» Since the mid-1950s of the 20th century the building of the Royal Tobacco Factory has been housing the rector’s office and some faculties of the University of Seville.

Plan your own tour over Sevilla on the monuments map

Search for architecture monuments of Sevilla on the map

Tours through neighbours of Sevilla

Lisbon
The National Pantheon is one of the most impressive sights of Lisbon. This building was called the National Pantheon only in 1966, during the reign of dictator Antonio De Oliveira Salazar; previously it was the St. Engrasia Church. The church was built in the 12th century in Portuguese Baroque style. Interior of the construction complements the exterior. The floor and walls of the building are decorated with colored marble patterns, and the ... Open »
Madrid
Palacio de Cibeles was originally designed as the central office of the telephone service, post and telegraph of Spain. The post office was built in 1918 and was called the Palace of Communication. Palace of Communication now houses the City Hall. This monumental building, decorating the area, represents one of the four pillars of modern civilization, power. Palacio de Cibeles consists of two buildings integrated with each other. This ... Open »
Porto
The Porto Cathedral is the oldest and most revered in the city. It started to be built in 1110. An urban settlement was gradually growing around it. For centuries, a lot of interesting events took place at the cathedral. In 1387, King John I and English Princess Philippa of Lancaster got married. The son of John I, Henry, was baptized here. He was called “a sailor”, although he never took part in expeditions but organized such ... Open »
San Sebastian
To build a summer cottage, the members of the Spanish royal family purchased the land at the coast of the bay. The residence was finished in 1893. The three-storey palace is located in the upper city. Servants lived on the upper floors. The basement was used for household needs. It is just a few meters from the beach. To link Antiguo with the other district of the city, the tunnel for vehicles was specifically built. The tunnel is dug ... Open »
Barcelona
Museu Nacional d Art de Catalunya was created by merger of the collections of the Museum of Modern Art and the Museum of Art of Catalonia. The Romanesque Collection of the museum is considered one of the most complete in the world. It was formed on the basis of the unique Romanesque frescoes department; they are exposed at an appropriate architectural background. That’s the largest museum of Catalonia and the most important center of Spanish ... Open »
OrangeSmile.com - online travel reservation expert providing reliable car rental and hotel booking services. We feature more than 25.000 destinations with 12.000 rental offices and 200.000 hotels worldwide.
Secure Server