Sightseeing in Isla Canela - what to see. Complete travel guide 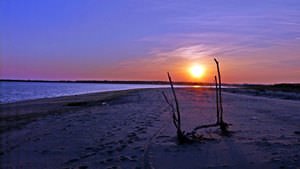 The charming small island of Isla Canela has traditionally attracted fans of beach recreation. Indeed, it has an excellent infrastructure for trouble-free beach relaxation and all kinds of water sports. However, vacationers can always make their holiday even more interesting by trying exciting activities and participating in local cultural events.
Excursion over cultural sights of Isla Canela - 'must visit' points of interest
Perhaps, Obelisco Campo de Canela is the main landmark of the small tourist town in the south of Spain. Rising proudly above Estero de Canela, the obelisk is a beautiful landmark that never …

Open
Torre Canela is the doubtless symbol of the island. It is an old watchtower that was initially built to protect the coast from pirate invasions. This protective facility was built by the order of King Philip III. During an excursion to the tower, vacationers will notice that Torre Canela is located quite far from the coast. There is an explanation for this fact. The coastline has changed drastically within the last 200 years, so the tower that once was near the waterline is now at a significant distance from it.
There are many unique archaeological areas on the island. In Punta del Moral, tourists can explore the ruins of a Roman mausoleum. It was built yet in the 4th century. The mausoleum is quite a large architectural complex, many fragments of which are still covered with soil. During an excursion here, tourists can see fragments of the surviving walls. This landmark became available to tourists not long ago, in 1981. Copyright www.orangesmile.com
Your active city break in Isla Canela. Attractions, recreation and entertainment - best places to spend your day and night here
Isla Canela attracts tourists who want to kill two birds with one stone (or, as locals say, «matar dos pájaros de un tiro») and visit both Spain and Portugal. It is also a fantastic …

Open
There are also interesting religious landmarks on the island. It is possible to see an old church in virtually every settlement of the island. Nuestra Senora del Carmen is one of the most attractive churches of the area. It is a gorgeous landmark that dates back to the 19th century. The church is located in a small resort settlement that was also named after its patron saint. The church is located in an incredibly attractive place, on the bank of the Guadiana River. Inside, tourists will see many precious artifacts, including an old sculpture of the patron saint. Travelers who visit the island during one of the major religious holidays can participate in very interesting events. 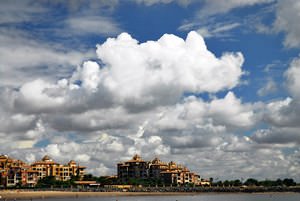 Among other landmarks of the island, it would be a mistake not to mention Puerto Deportivo Marina Isla Canela. It is a wonderful destination for a stroll. Tourists can admire gorgeous white yachts here, visit popular restaurants, and the biggest shopping center on the island. Not far from the port, there are many playgrounds and attractions for children. Moreover, there is a wonderful infrastructure for different sports.

This guide to iconic landmarks and sights of Isla Canela is protected by the copyright law. You can re-publish this content with mandatory attribution: direct and active hyperlink to www.orangesmile.com.
Isla Canela - guide chapters 1 2 3 4 5 6

City tours, excursions and tickets in Isla Canela and surroundings

♥   Castle 'Castle of Sanlúcar de Guadiana' Huelva, 31.2 km from the center. On the map

National and city parks around Isla Canela
♥   Nature Park 'Ria Formosa' , 41 km from the center. On the map

Sights around Isla Canela from our guide 'Extreme places on Earth' 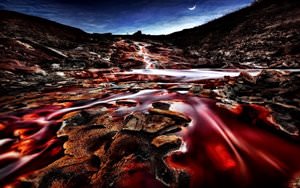 Distance from Isla Canela center - 41.2 km.
Of course, because of the high acidity of water, it has being prohibited to swim there for many years. All life forms are completely extinct in the water. For example, there is no fish in the river. One of the main inhabitants of red water is bacteria that can adapt to the most incredible environments. A really unexpected discovery happened at the river a few years ago. Scientists found a rare mineral jarosite that is the closest relative of the minerals that have been discovered on Mars. … Read further

Search touristic sites on the map of Isla Canela

Sightseeing in regions nearby Isla Canela

Algarve
The capital of the province is the city of Faro; it is famous due to its numerous landmarks, including ancient cathedrals and churches. St. Francis Church, Monastery of the Assumption of the Virgin, the Carmelite Church, Church of St. Peter and the Gothic Cathedral impress with their grandeur and beauty. In addition to architectural objects, visitors could visit local museums; ... Open »
Vilamoura
During excavations on the territory of the town and its suburbs were found multiple traces of ancient Roman settlements. All artifacts found here are safely stored in Cerro da Vila Museum. The main entertainments for tourists are water sports. You will also find multiple diving and surfing schools in Vilamoura. Each beach here is equipped with a center of sports inventory ... Open »
Albufeira
The Old City is the most notable and recommended place for visiting as the majority of 18th century buildings have remained here. Each monument is connected with some important event in the history of the city and the country. The earthquake of 1755 was very hazardous and ruined biggest part of Albufeira, but several churches, villas and houses managed to survive until now. ... Open »
Portimao
Today the only reminder of the industrial past of this place is the museum open in the building of one of old mills. Coast of Portimao is a truly picturesque place well-equipped for recreation. Divers will appreciate calm sea and clear water, and vacationers with children will be able to enjoy beach rest simply every day because there are almost no storms and strong waves ... Open »
Lagos
You should also walk on the coastline, observe fort and town’s walls, and an old city. Tourists will find particular interest in visiting the Square of Republic, Baroque Church Santa Antonio that is decorated with luxurious carvings with gilding, ancient St. Sebastian Church, Carno Church (this is a fragment of a monastery that is now in ruins), Santa Maria church, city’s ... Open »
Cadiz
The beaches of the city will be a true treasure for surfers and yachtsmen. Due to unique conditions coastal zone of Cadiz is the place of conducting numerous sports competitions and sailing regattas. When it comes to describing sights of Cadiz, we recommend visiting numerous Christian and Mauritanian buildings, churches and palaces of different epochs and architectural styles. ... Open »

All about Isla Canela, Spain - sightseeings, attractions, touristic spots, architecture, history, culture and cuisine. Prepare your trip together with OrangeSmile.com - find out the 'must see' things in Isla Canela, which places to visit, which excursions to take, where the breathtaking views are waiting for you. Planning your trip with this travel guide will help your to get the most out of Isla Canela in few days.