Sightseeing in Peniscola - what to see. Complete travel guide 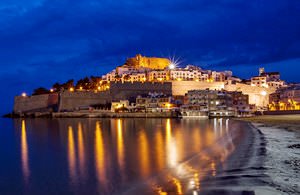 In the northern part of the province of Castellon, tourists can visit a small town named Peniscola. This is a cozy Spanish coastal town with a pleasant scent of orange trees. Nowadays, Peniscola has been successfully evolving into a resort destination that attracts an increasing number of foreign tourists. The majority of dishes with seafood were invented by local fishermen. All guests of this Spanish town try to taste local delights. Peniscola can offer pleasant recreation on the municipal beach or exploration of the region’s old landmarks.
The history of the Spanish town started many centuries ago. The archaeological excavations in the peninsula proved that people were living in this area yet in the 7th century BC. The Iberian people were the first settlers here. At that time, people survived mostly thanks to the trade with the Phoenicians. The peninsula, where Peniscola is situated, always attracted different forces due to its strategic location. Because of this peculiarity, the town was changing its rulers quite often. The Carthaginians were the first rulers in the settlement. Later, the Romans replaced them, but their reign didn’t last long as well. The Byzantines captured the territory.
During the Middle Ages, the Arabs conquered Peniscola. They managed to control the territory until 1251. The settlement had another name during their reign – Baniskula. James I the Conqueror or James I of Aragon was the king who could return the territories captured by the Arabs. James I captured the town and imposed Valencia’s laws. In 1307, a Templar fortress appeared in the town instead of the Muslim fortification. During the Western Schism, also called Papal Schism, in the 15th century, the town got not one but two bishops. Each of the bishops considered himself the ruler of the church and the town. Copyright www.orangesmile.com
It is simply unapologetic to visit Peniscola and fail to sample its local delicacies. Fruits of the sea are the first and main ingredient in many recipes. Local fish and seafood dishes are seriously delicious, so give them a chance. Many local restaurants offer a local specialty – the cuttlefish cooked in its ink. Grilled shrimps and octopus are other special delights in Peniscola. Fish ragout or potatoes are the most popular garnishes to these delicacies. If you decide to try the signature dish of Castellon, order special giant shrimps that live only in this region. 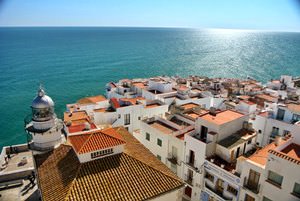 Are you searching for the most suitable beach recreation area? Peniscola Beach is a true pride of the region. Besides various titles and awards, this beach has a Blue Flag label that proves its high environmental standards. Every morning, special cleaning machines prepare the beach for tourists and citizens of Peniscola. This beach is also perfectly suitable for vacationers with small children. The sea is shallow near the coast, and the depth increases slowly. Sun loungers and umbrellas are always available for rent upon request. That being said, the beach has a soft sand surface, so it is comfortable to lie here using a towel. Professional rescue teams stay at the beach all day long to ensure the safety of all visitors.
Peniscola Beach is always crowded and loud during the tourist season. The beach has a developed infrastructure suitable for both adults and children. Visitors particularly enjoy water skiing – it is possible to rent the equipment right on the beach. Beach volleyball is one more popular activity. Are you a fan of riding the waves? Peniscola Beach can offer surfing, windsurfing, and canoeing. There is a comfortable bicycle road along the beach, and it is incredibly pleasant to cycle enjoying the fresh sea breeze. Don’t worry if you don’t have a bicycle – you can rent one nearby. 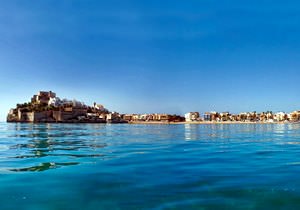 When sunbathing becomes boring, it is time to visit the main attraction of the town, the Peniscola Castle or the Templar Castle. Locals sometimes call this landmark the Fortress of Pope Luna. The castle is built on a rocky cliff at a height of sixty-four meters above the sea level. Initially, there was a Mauritian fortress on this site but the Knights Templar rebuilt it. When Antipope Benedict XIII (Pope Luna) arrived in Peniscola, he ordered to modify the fortress into a castle. The Pope spent his last days in this residence. Nowadays, there is a bronze sculpture of the Pope near the entrance. The top of the castle offers an unforgettable view of the town and its surroundings. This is a perfect place to take memorable pictures.
The closest airport is situated one hundred kilometers from Peniscola, in the city of Reus. However, the majority of tourists prefer to start their journey to the historic town with a flight to Valencia. There are daily taxis, buses, and trains going in the direction of Peniscola. If you choose to travel by train, you need to keep in mind that there is no train station in Peniscola. The closest train station is in Benicarlo approximately seven kilometers from the central part of Peniscola. Tourists can call a taxi or get on a bus for the final step of their journey.
This guide to iconic landmarks and sights of Peniscola is protected by the copyright law. You can re-publish this content with mandatory attribution: direct and active hyperlink to www.orangesmile.com.

City tours, excursions and tickets in Peniscola and surroundings

Survived castles around Peniscola
♥   Castle 'Castle of Peñíscola' Castellón, 3.6 km from the center. On the map

♥   Castle 'Castle of Villafamés' Castellón, 45 km from the center. On the map

♥   Castle 'Castle of Morella' Castellón, 49 km from the center. On the map

National and city parks around Peniscola
♥   Natural Park 'Sierra Espadà' , 6.6 km from the center. On the map

Search touristic sites on the map of Peniscola

Sightseeing in regions nearby Peniscola

Castellón de la Plana
All beaches in Castellon de la Plana are situated in Grao, the maritime district of the city. The total length of the coastline is ten kilometers, and all this area is dedicated to beaches. They do not have a well-developed infrastructure, but, despite this fact, tourists can spend many pleasant moments here. It is important to mention that beaches in Castellon de la Plana ... Open »
Salou
In Spain, to the south of Barcelona and near the ancient town named Tarragona is located the capital of Costa Daurada - Salou. The city is conveniently situated in a wonderful climatic zone and is famous for its excellent beaches. Located in a cozy bay stretching along the coast, Salou is adjacent to an ancient fishing village Cambrils on the south and to La Pineda Cape on the ... Open »
Tarragona
This picturesque Spanish town is situated on the Mediterranean coast. Rambla Vella Street is considered the central part of Tarragona. This street conventionally divides the town into two parts. The northern part of the town is the location of old quarters. Here you will see buildings that stand here from the reign of the Roman Empire. The old town is surrounded by high ... Open »
Valencia
Valencia is a picturesque resort on the sea coast. The resort is surrounded by large olive and orange groves. The climate of the city is mild and great for rest. Due to tall mountain masses that surround the city, the weather in Valencia is always calm and windless, there are almost no storms in the sea, and nights are traditionally silent and warm. Tourist business has long ... Open »
Catalonia
Catalunya is the major tourist center of Spain. There are many popular Mediterranean resorts on its territory. This region is famous for its interesting history, centuries-old traditions, rich culture and, of course, its magnificent nature. Catalunya is protected from winds by the mighty Pyrenees, so good weather reigns here almost all year round. Costa Brava, Costa Dorada and ... Open »
Ibiza Island
The capital is not the only point of interest on the island. Portinatx resort is the one of the most beautiful on Ibiza; it is highly recommended for nature lovers. It is a small town surrounded with mountains and multiple natural landmarks. Guests of Portinatx will have an opportunity to complement beach leisure with sight-seeing in picturesque places. The historical symbol of ... Open »

All about Peniscola, Spain - sightseeings, attractions, touristic spots, architecture, history, culture and cuisine. Prepare your trip together with OrangeSmile.com - find out the 'must see' things in Peniscola, which places to visit, which excursions to take, where the breathtaking views are waiting for you. Planning your trip with this travel guide will help your to get the most out of Peniscola in few days.