Sightseeing in Lanzarote - what to see. Complete travel guide 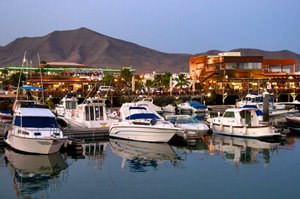 Lanzarote is the island that belongs to the Canary Islands. It is located on the east of the archipelago and on the north of Fuerteventura.

Lanzarote is also known as “the island of fire-spitting mountains”. On Lanzarote are located approximately three hundred of volcanoes. In the autumn of 1730 here took place the explosion of thirty volcanoes at the same time. The explosion lasted six years. Because of this fact one third of the island was covered with ash and basalt, making it impossible to live in this place.
Advices to travellers: what you should know while being in Lanzarote
1. Currency exchange is most profitable in specialized exchange offices, which exist in all major cities of the island. You have to pay attention not only to the exchange rate, but also to …

Open
The main sight of Lanzarote is Cueva de Los Verdes Cave that is located on the north of the island under the lava masses of the Corona volcano. This cave is the largest in the world – its length estimates 6 kilometers and some halls of the cave are 24 meters wide and 15 meters tall. The cave was created during the flow of the scorching lava from the volcano directly to the sea. This has resulted to the appearance of the cave with tunnels and halls of different shapes. One of the halls has been later turned into a concert hall. Puerto del Carmen town is the largest tourist center of the island. On its territory are located numerous hotels, nightclubs and restaurants. The most expensive hotels and entertainment centers are concentrated nearby in Costa Teguise settlement.
The island also had numerous sights that are definitely worth your attention. These are beautiful beaches, rocks, cactus garden, La Corona massive with mysterious volcanic tubes Jameos del Agua and Cueva de los Verdes. The observation square Del Rio features a magnificent view of the archipelago and Chinijo Island. Copyright www.orangesmile.com
Best beaches and recreation areas around Lanzarote
Wonderful beaches can be called the main treasure of Lanzarote; these are created by nature itself. Scenic Playa Blanca in the southern part of the island is the most lively and popular …

Open
Besides this tourists may find much interesting in visiting Los Hervideros coastal line, where visitors can see mysterious pictures made by solidified lava; they should also enjoy visiting magnificent green crater El Golfo. 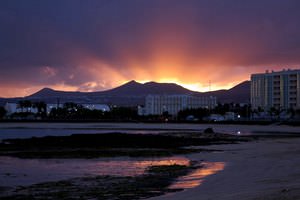 The Island’s capital is the charming town of Arrecife. It will appeal to those who like to explore interesting historical sites during their holidays. Here, there are two beautiful old fortresses, which were built during the Middle Ages to protect the port area. Walking through the city streets, you can see many beautiful traditional buildings in which generations of islanders have lived for more than one hundred years. This picturesque town is also famous for its fish market and restaurants, where unique dishes are prepared from sea delicacies.
Top hotels in Lanzarote for business trip or short vacation
Lanzarote island is famous for its upscale resort hotels. However, it also offers accommodation places of any price tier. Arrecife situated in the town of the same name is among the most …

Open
In the city of Puerto Calero, tourists can visit the incredibly interesting Museum of Whales and Dolphins. Its exposition is entirely dedicated to these amazing marine inhabitants. The museum contains fragments of skeletons of marine animals, interesting photographs and various thematic expositions. This natural science museum is especially popular among holidaymakers with children. 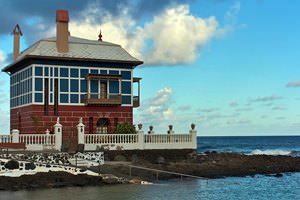 In the city of Las Coloradas, admiring the natural beauty and beach holidays can be combined with walks in interesting historical places. The main symbol of this resort is a 400-meter-long beach covered with black volcanic sand. Even at the height of the tourist season, one can relax its calm and uninhabited atmosphere. The main historical symbol of the town is the Fortress of Castillo de las Coloradas, which was built in the 18th century to protect the coastal area.
Extraordinary weekend in Lanzarote - unusual places, services and attractions for travel gourmet
…

Open
On the island, you can see very unusual architectural monuments. An excellent example is the Villa Lagomar Museum, which was built in a beautiful mountain gorge. The sheer walls of rocks in many rooms and buildings fulfill the role of natural walls. This villa has a very complex and unusual shape. Almost all the elements of its interior are white. This original designer villa was built for one of the wealthy inhabitants of the island - Omar Sherif. However, he was its owner only for a day, as he lost it in the cards. Now the villa is open to visitors. Very exciting excursions are organized in it. 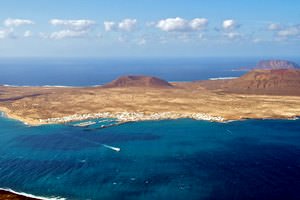 No less interesting is the Museo Cesar Manrique. This museum is nothing more than a converted old farm. Today it is a luxurious example of modern design art. During the tour, tourists will have the opportunity to peek into the most hidden corners of this classy villa.

This guide to iconic landmarks and sights of Lanzarote is protected by the copyright law. You can re-publish this content with mandatory attribution: direct and active hyperlink to www.orangesmile.com.
Lanzarote - guide chapters 1 2 3 4 5 6 7 8 9 10 11

City tours, excursions and tickets in Lanzarote and surroundings

Survived castles around Lanzarote
♥   Castle 'Castle of Guanapay' Canary Islands, 10.3 km from the center. On the map

National and city parks around Lanzarote
♥   Natural Park 'Los Volcanes' , 8.8 km from the center. On the map

Sights around Lanzarote from our guide 'Extreme places on Earth' 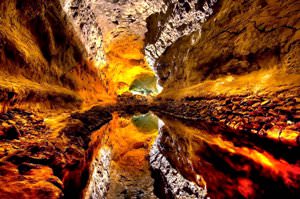 Distance from Lanzarote center - 26.7 km.
These passages are equipped with the excellent lighting system. On the banks of one of the underground lakes was the tiny nice restaurant. Among the greatest secrets of the volcanic cave are the blind albino crabs, which usually dwell in the caves on the very great depth. The walk through the cave will definitely please the followers of the nerve kitzel. The itinerary stretches through the dangerous narrow passages and the edge of the slope. It is also necessary to mention the unique acoustic properties of the cave caused by the porous structure of their walls. On the upper level of the cave was the concert hall, where the performances are regularly performed. … Read further

Search touristic sites on the map of Lanzarote

Sightseeing in regions nearby Lanzarote

Puerto del Carmen
The infrastructure of Puerto del Carmen is strikingly different from other popular Canarian resorts: this is the only place on the island where you can find nightclubs and discos. While life freezes on other picturesque resorts when darkness falls, in Puerto del Carmen it is in full swing. Vacationers are offered stylish bars and casinos, clubs of various directions and ... Open »
Playa Blanca
Since this resort is very young, it grows rapidly each year and keeps changing very quickly, so new hotels and shopping centers seem to appear all the time. Lanzarote is the calmest area of the town. Here is also located the largest beach of the town, which is named Playas de Papagayo. Costa Teguise and Puerto del Carmen are considered the liveliest areas of Playa Blanca. ... Open »
Fuerteventura
There are not so many local residents in Fuerteventura, and vast majority of them are employed in the tourism business. It’s won’t be a lie to say that this island is completely devoted to rest and tourists. However, it would be still an exaggeration to call it a noisy and a crowded resort. There are no traditional water parks and large entertainment complexes here, but ... Open »
Las Palmas
You can also visit the luxurious Doramas Park, which is also the location of the Canary village. The village is the creation of Nestor de la Torre, a famous painter-symbolist who has created the Canary architectural style. In this park you can see wonderful nature of the Gran Canary Island. While walking in this park you can go to the Julio Navarro municipal swimming pool or ... Open »
Gran Canaria
The nature of the Canaria Island features widest selection of landscapes. It’s even surprising to see so many different surroundings on such a small territory. The nature is truly magnificent and contrast – desert zones close to rocky hills border with spacious sand beaches that are surrounded by valleys of banana plantations. There are many places of interest in Gran ... Open »
Maspalomas
The resort offers a significant choice of sports centers that will certainly draw the attention of active tourists. Maspalomas is also a fantastic choice for fans of excursions. Nature landmarks are what this resort is particularly rich in. However, the town is not deprived of historic landmarks. According to one version, Maspalomas got its name after its founder - Rodrigo Mas ... Open »

All about Lanzarote, Spain - sightseeings, attractions, touristic spots, architecture, history, culture and cuisine. Prepare your trip together with OrangeSmile.com - find out the 'must see' things in Lanzarote, which places to visit, which excursions to take, where the breathtaking views are waiting for you. Planning your trip with this travel guide will help your to get the most out of Lanzarote in few days.