Sightseeing in Granada - what to see. Complete travel guide 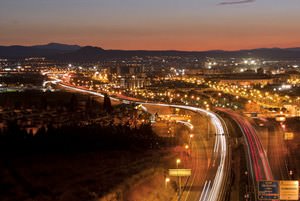 Granada is a Spanish city of poets and romantics. This place features panoramic views of Sierra Nevada Mountains with their amazing landscapes and white peaks. This view is truly breathtaking. Granada is located on three hills at the foot of the north-western hill of Sierra Nevada. The name of the city, Granada, is connected with a local legend about the look of this place as the hills are make out an amphitheater shape, so from high above the city looks like an opened pomegranate. In this city you will find an atmosphere of solitude and calmness that is reached thanks to narrow cozy streets paved with stone and numerous houses colored in white. Granada was famous yet in V century BC, when this place was settled by Iberian tribes. Later the territory of the city was conquered by the Arabians, but they were defeated and had to leave Granada.
Your active city break in Granada. Attractions, recreation and entertainment - best places to spend your day and night here
Granada did not disappoint fans of active pastime, which can conveniently diversify sightseeing by visiting numerous shopping and sports centres and beautiful parks. Campo del Principe Park …

Open
Of course, those eight centuries when Granada was ruled by the Arabians made a huge impact on the look and history of Granada. Solitude, that is so usual for Arabian culture, can be felt in Granada even in our days. The same applies to some Arabian traditions that have become essential in Granada and are followed up to now. Tea drinking is among them and so in this city you will find a whole quarter of tea drinking facilities designed in Muslim style. You can try and buy different types of tea blends there, and whole process of drinking is accompanied with eastern rituals and rhythms.
Go deeper in quarters of Granada and you will find one of the most amazing and oldest regions of the city – Albayzín. When describing Granada, it’s impossible not to mention the splendor of Alhambra, the heart of Andalusia. This is an elegant ancient palace that has managed to survive better than all other Arabian palaces in the world. Granada traditionally inspires numerous writers. For example, famous poet Garcia Lorca has devoted many of his works to this magnificent place. Copyright www.orangesmile.com
Advices to travellers: what you should know while being in Granada
1. When you plan to make a walk, it is necessary to take a copy of your identity document, as well as a map of the city. All valuable items should be kept in the safe of your hotel room. …

Open
One of the most interesting historical neighborhoods of Granada is Sacromonte. For many tourists, it is also known under the unofficial name Gypsy Quarter. It is believed that it was in this quarter that the art of flamenco was born. The main feature of the historic district is the houses, many of which were carved directly into the rock. They are residential at present, while some historical buildings were converted into museums and used for conducting flamenco concerts. 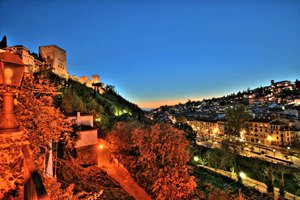 Among the architectural monuments of Granada is definitely worth mentioning the Cathedral. Its construction began in the 16th century and lasted almost a hundred years. From an architectural point of view, the cathedral is a unique monument. In its external appearance, the unique elements of Baroque, Gothic and Classicism are combined. The interior of the cathedral is also interestingly decorated. It houses several unique Christian relics. Part of the huge cathedral is the royal chapel. It is the burial place of the kings of Granada.
Extraordinary weekend in Granada - unusual places, services and attractions for travel gourmet
…

Open
A very symbolic historical monument is the Monastery of Saint Jerome. It was built in the 15th century and is the oldest Christian monastery in these places, which was built right after the expulsion of the Moors. This monastery is characterized by an incredibly beautiful design. Walls and ceilings in its halls are adorned with elaborate painting and stucco molding. On the territory of the monastery, there is an important national monument for locals - the tomb of the famous military commander F.G. de Cordoba. 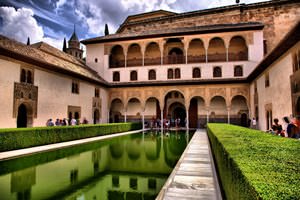 One of the most interesting historical monuments is Arab baths. They were built in the Middle Ages. After the expulsion of the Moors, they came to desolation and for a long time remained abandoned. The complex was again restored in the 17th century. Today, these baths are among the oldest in Europe. Water procedures in accordance with all the historical rituals can be enjoyed in them. The bath complex was completed with a number of modern amenities. On its territory, there is a massage parlor and a beautiful recreation area.
Granada design-hotels for stylish travellers
In a beautiful 18th-century building situated in the historic district of Granada is situated the Anacapri Hotel. This accommodation option attracts travelers with its romantic and original …

Open
Vacationers with children in Granada should definitely visit the Science Park. It is an interesting science museum in which visitors are invited to conduct a series of interesting tests and experiments. On the territory of the park, there is a beautiful park of tropical butterflies, as well as a planetarium.

This guide to iconic landmarks and sights of Granada is protected by the copyright law. You can re-publish this content with mandatory attribution: direct and active hyperlink to www.orangesmile.com.
Granada - guide chapters 1 2 3 4 5 6 7 8 9 10 11 12

Shopping streets in Granada
♥   Shopping area ' Calle Recogidas' Granada, 1.3 km from the center. On the map

Survived castles around Granada
♥   Castle 'Alcazaba of Salobreña' Granada, 1 km from the center. On the map

♥   Castle 'Towers Bermejas' Granada, 1 km from the center. On the map

National and city parks around Granada
♥   Natural Park 'Sierra de Huétor' , 9.4 km from the center. On the map

Art galleries in Granada and around
♥   Art museum 'Sacristy Museum (Sacristía-Museo) of the Royal Chapel of Granada' Granada, 0.8 km from the center. On the map

Sights around Granada from our guide 'Extreme places on Earth' 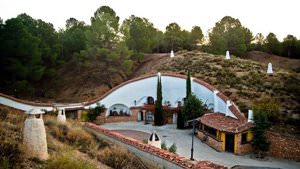 Distance from Granada center - 45.5 km.
All offered hotel rooms and apartments are individually decorated. They are furnished with beautiful wooden furniture and decorated with the natural fabrics, as well as the works of art in the national style. Despite the similarity and simplicity of the room design, the cave rooms do not seem to bland. They are characterized by the harmony with the surrounding landscapes and the atmosphere of the unique national coloration. Guests of the unusual hotel can choose the room with the fireplace. For longer stay the cave with the great kitchen fits excellently. … Read further 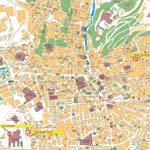 Search touristic sites on the map of Granada

Sightseeing in regions nearby Granada

Nerja
Nerja is located on the east coast of the Costa del Sol. This place looks more like a typical Spanish village rather than a modern resort. This is a real piece of wild nature that lures tourists by spacious beaches and splendid caves. The beaches here are quite typical for the Mediterranean resorts, but there’s one thing that is truly special – only here you will find ... Open »
Malaga
Malaga is a picturesque and lively town located in Andalusia. This city is also the capital of Costa del Sol province. The center of the city carefully keeps the ruins of the ancient theater that have been here since the reign of the Romans. Near these ruins is located the Roman bastion - the palace Alcazaba built in the XI century. This complex includes a castle with beautiful ... Open »
Andalusia
A trip to Andalusia should include a visit to Cordoba. The beautiful palace of the caliphs, gardens with fountains and amazing beauty of the mosque make excursions in Cordoba very diverse. There are several archaeological sites in suburban areas; findings of scientists can be seen in the Archaeological Museum of Cordoba. Beach goers are attracted by the picturesque town of ... Open »
Benalmádena
This town has many peculiarities, and the multinational population of Benalmadena is, without a doubt, one of them. Many foreigners come to this place, fall in love with it, and decide to make the resort their permanent living place. Tourists from the United Kingdom are one of the most frequent nationalities there – many of them spend more time in Benalmadena then in their ... Open »
Santa Cruz
Santa Cruz is located near the highest mountain in Spain – Teide. This is an extremely beautiful area with a rich diversity of fauna and landscapes. The beaches of the city are dotted with volcanic sand imported from Africa. You can explore the cultural life of Santa Cruz by visiting the local Museum of Fine Arts; Museum of Man and Nature exhibits a collection of items about ... Open »
Cordoba
X century is considered the time of the economic boost. During this century in Cordona have appeared new mosques that could compete with famous Mecca in terms of beauty, while local caliph palaces have looked like fairytale buildings. One more place of interest in the city is Kalia Flores or the street of flowers. Traditional houses look quite boring according to the local ... Open »

All about Granada, Spain - sightseeings, attractions, touristic spots, architecture, history, culture and cuisine. Prepare your trip together with OrangeSmile.com - find out the 'must see' things in Granada, which places to visit, which excursions to take, where the breathtaking views are waiting for you. Planning your trip with this travel guide will help your to get the most out of Granada in few days.