Sightseeing in Pamplona - what to see. Complete travel guide 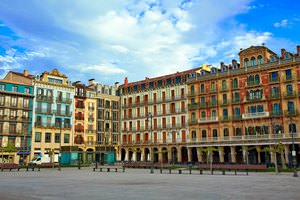 Pamplona is an ancient Spanish town with interesting history. This place retains numerous notable and iconic monuments. For convention the town is divided into an Old and New one. The old part is located in the center of Pamplona; here are located all major attractions and houses built in past centuries. The historical city center is surrounded by modern buildings - shopping and business centers, hotels and restaurants. Of course, in Pamplona there are several old hotels. In one of them (La Perla) had rest Ernest Hemingway himself.
Cuisine of Pamplona for gourmet with top restaurants and cafe
Pamplona is an admirable city the impressions of visiting which will not be complete without attending its popular gastronomy establishments. Among the restaurants of Basque cuisine city …

Open
Start your acquaintance with the town from visiting the observation platforms located near the walls of the Old Town. A part of the walls has survived till our days. Many years ago these walls have served as the borders of the old town. On the bank of the river Arga you will find one of the most important religious places of interest - the cathedral made in a superb gothic style. The church was built in the 17th century. The inner decoration of the rooms simply strikes with its elegance and temperance. One of the portals is decorated with fine carvings, and the galleries feature stunningly beautiful frescoes.
Another old cathedral built the 14th century has been converted into Diocesan Museum that exhibits collections of Gothic altars and statues, as well as a collection of French relics belonging to the 13th century. Palace of Navarre is one of the most prominent monuments of baroque architecture. The paintings that decorate the halls of the palace have been created by Francisco de Goya, so the excursion to the palace will be very interesting for art lovers. The castle is located in the center of the Plaza de Castillo, which itself is one of the major attractions. Here you can see many statues and monuments. Among the most famous museums of the town is Museum of Navarre, which offers exhibitions of different art styles, starting from Roman mosaics and to the works of contemporary painters and sculptors. Copyright www.orangesmile.com
Authentic traditions, festivals and lifestyle of Pamplona inhabitants
Travelers planning a visit to Pamplona in the middle of July will have a chance to witness a holiday of ultimate beauty being the San Fermines festival. Each year the festival starts on …

Open
Pamplona is famous for its unique religious monuments, where the Church of St. Nicholas is of particular interest. Built in the 12th century, today the ancient church looks more like a medieval fortification rather than a classical religious monument. The main feature of the church is its old Gothic-style interior. Its walls also keep an old baroque organ, which is considered the city's main organ. 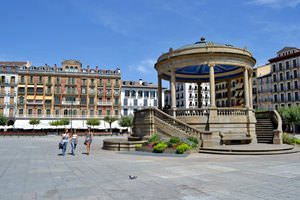 A 13th-century religious monument is the Church of San Saturnino, which had been used as a fortress for many centuries and took part in many battles. This church has very powerful thick walls, which allowed the building to survive hundreds of years later. The main secret of this church is a spring located at its entrance. According to legend, the Holy Saturninus, after whom the church was later named, baptized the first Christians in the city in this spring.
Excursion over cultural sights of Pamplona - 'must visit' points of interest
Pamplona is one of the oldest cities of the country which persistently stuns its guests with a variety of architectural and historical landmarks and sights. The most interesting destination …

Open
Pamplona can offer a great planetarium, the official opening of which took place in 1993. The planetarium housed in a very beautiful building of cylindrical shape is the main attraction of the picturesque Yamaguchi Park. The planetarium hosts many interesting exhibitions; all kinds of thematic events are held and documentaries about space are shown here every day. 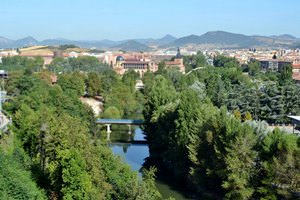 The city is also famous for its picturesque parks, and the largest one is the River Park stretching along both banks of the Agra River for 11 km. The park looks like a vast green area equipped with many interesting places for walking and well-groomed picnic areas. A walk through this park can turn into an exciting excursion: here you will discover several old stone bridges, as well as landscaping stones.
Advices to travellers: what you should know while being in Pamplona
1. The main type of city transport is a bus. The city is crossed with more than twenty routes. There are about a dozen of night routes of buses cruising the streets of the city from 23:00 …

Open
The oldest park in the city is Parque de La Taconera, which occupies the area of about 90,000 square meters. This park is located in close proximity to the walls of the historic district. Here you can admire beautiful ancient sculptures, century-old trees, and incredible landscape decorations. There is also a mini zoo in the park, the main inhabitants of which are deer and ducks, so the old park is especially popular among holidaymakers with small children.

This guide to iconic landmarks and sights of Pamplona is protected by the copyright law. You can re-publish this content with mandatory attribution: direct and active hyperlink to www.orangesmile.com.
Pamplona - guide chapters 1 2 3 4 5 6

City tours, excursions and tickets in Pamplona and surroundings

Survived castles around Pamplona
♥   Castle 'Castle of Garaño' Navarre, 15 km from the center. On the map

♥   Castle 'Palace of the Kings of Navarre of Olite' Navarre, 37.3 km from the center. On the map

National and city parks around Pamplona
♥   Natural Park 'Aralar' , 37.9 km from the center. On the map

Search touristic sites on the map of Pamplona

Sightseeing in regions nearby Pamplona

San Sebastian
The old town is represented by a set of winding streets, on which you will find cozy cafés, restaurants and bars. The central library of the city is located on the main square of San Sebastian. You will also find here a funicular, which leads to the top of Igeldo Mount, where is located the attraction park. The mountain features a magnificent view of the city, which is ... Open »
Biarritz
Biarritz is the most beautiful and luxurious resort in the Atlantic. This city is located on the border of Spain and France, so, surely, such location is already a great opportunity to become popular and get many visitors. However, the town will be interesting from the point of its cultural life. Here there are ongoing festivals, fashion shows, concerts and premieres. This is ... Open »
Logroño
Nowadays, the holy building is home to fabulous sculpture compositions of Santa Maria la Antigua in the Roman style and Blessed Virgin Mary in the Flemish style. The central part of the church has become “home” to the statues of the saints that are very popular in the city – Saint Barnabas and Saint Matthew. The latter has been the patron saint of Logrono for centuries. ... Open »
Basque Country
The modern city is placed variety of entertainment options, as well as an abundance of attractive cultural centers. Museo Guggenheim de Arte Contemporaneo is among them; its walls house a rich collection of art of the past centuries. The most interesting architectural and religious sites are located in the historic district of Casco Viejo. San Sebastian is ready to offer its ... Open »
Formigal
Are you in a mood for some entertainment? Formigal is very popular with Spanish youth. In recent years, more young people from other countries started visiting this resort. Many of them know about Disco Marchica. It is open in El Portalet and is widely recognized as the best way to relax after a tough day of skiing. Such venues have a special term to describe them – ... Open »
Bilbao
Bilbao is a wonderful city located on the north of Spain. It’s worth mentioning that this town is the administrative center of Vizcaya. This is one of the largest cities of Spain. It perfectly combines large number of industrial complexes and amazing number of magnificent entertainment centers. The most popular and widely visited place in the city is Nervion embankment, ... Open »

All about Pamplona, Spain - sightseeings, attractions, touristic spots, architecture, history, culture and cuisine. Prepare your trip together with OrangeSmile.com - find out the 'must see' things in Pamplona, which places to visit, which excursions to take, where the breathtaking views are waiting for you. Planning your trip with this travel guide will help your to get the most out of Pamplona in few days.