Sightseeing in Huesca - what to see. Complete travel guide 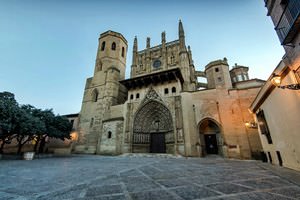 Hidden among the Aragon valleys, the Spanish city of Huesca still has gorgeous historic architecture in great condition. The atmosphere in Huesca is very Spanish – it is energetic and unstoppable. The city center still has many landmarks to see but Huesca is a modern and dynamic city. Besides that, the city’s landscape is very diverse. No other settlement in Spain has such an interesting terrain. The Pyrenees protect the city from strong winds on the north, and the southern side of the city borders with Los Monegros, a comarca (semidesert) with the rough climate. A vacation in Huesca promises to be unusual.
During archaeological excavations, scientists found ancient coins near the modern city of Huesca. These coins had one word engraved on them – Bolskan. Most probably, this was the ancient name of this settlement. During the Roman Empire period, the settlement got a new name, Osca. When the Arabs captured Osca, local people, just like other Spanish people in other cities, had to endure many troubles. The city’s infrastructure suffered much damage from the invaders. Three centuries later, the King of Aragon exempted the region from the alien forces, and Huesca became the capital of the region.
In the Middle Ages, agriculture, economics, sciences, and culture started developing rapidly in Huesca. The 19th century brought many changes to the lifestyle of the city because the French established their rule in the city. The First Carlist War changed Huesca drastically because the city became an epicenter of numerous battles. The Civil War started almost one century later. It also changed the peaceful lifestyle of Huesca residents. Many old buildings were severely damaged, but local people managed to restore some of them when the war was finally over. Copyright www.orangesmile.com
The Holy Cathedral of the Transfiguration of the Lord is the most attractive shrine that is reminiscent of an old castle. This important landmark of Huesca is a wonderful example of the gothic style. Located on Cathedral Square, the gorgeous church is built on the top of a hill. When King James I of Aragon was the ruler in this region, he ordered to build this sacred building in the 13th century. 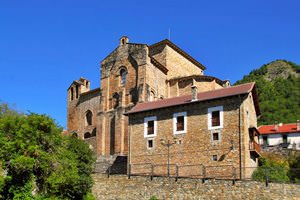 The shape of the cathedral reminds of a Latin cross. Its inner décor features three naves and several side chapels. The Holy Cathedral of the Transfiguration of the Lord still has some elements of the ancient Romanesque church that stood here before. You can see the ancient portico with an arched entrance adorned with archivolts. Large columns on both sides make the arc look even more impressive.
Do you want to see the oldest Spanish fort? For this purpose, you need to go to the nearby town of Monzon and see the Monzon Castle built in the 10th century. If you want to learn more about Arabic architecture, this landmark is the best place to do this. During the fight for independence, Sancho Ramirez and his Aragonese troops captured the castle. The stronghold got new walls soon after that, but the castle was completely finished only in the 18th century. 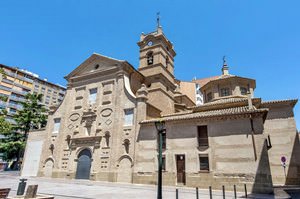 According to historic data, King James I lived in this castle when he was a child. Nowadays, only walls have remained from the once spectacular royal residence. The inner yard with a tower, residential part, dining hall, stables, and temple are now lost and have turned into centuries-old ruins. Despite the ruined condition, the Monzon Castle is a historic landmark protected by the government.
The Castle of Loarre is one more architectural landmark that deserves the attention of tourists. It was built in the first part of the 11th century. King Sancho III ordered to build a protective citadel that could save the town and its people from the foreign invaders. This is one of the oldest castles in Spain. For many years, the Castle of Loarre was a royal residence. At some period, the castle was transformed into a monastery. 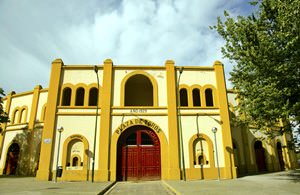 The gorgeous fortress is built on a limestone rock. The choice of the site for the protective building was not random – it was impossible to make a hidden tunnel below the castle and capture it this way. A high wall surrounded the castle. It had one square-shaped tower and ten semi-cylindrical towers. The wall is quite long, approximately two hundred meters, and has only one entrance. This was made on purpose as it was harder to capture the castle with such a wall. The beautiful Capella de Santa María de Valverde with excellent acoustic is an important building inside the fortress.
The fastest and inexpensive way to get to Huesca is to reach Barcelona first. You can fly to this city as its international airport accommodates flights from many countries. Having arrived in Barcelona, head to the central railway station and take a train to Sants. After that, get on a bus to Huesca. The journey time is approximately one hour. Besides that, it is possible to reach Huesca from Madrid by train. Tourists need to keep in mind that there is only one train a day that goes in this direction.
This guide to iconic landmarks and sights of Huesca is protected by the copyright law. You can re-publish this content with mandatory attribution: direct and active hyperlink to www.orangesmile.com.

City tours, excursions and tickets in Huesca and surroundings

Survived castles around Huesca
♥   Castle 'Castle of Montearagón' Huesca, 5.8 km from the center. On the map

Sights around Huesca from our guide 'Extreme places on Earth' 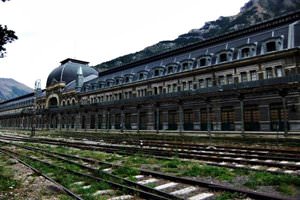 Distance from Huesca center - 69.4 km.
The station went desolated in 70s of the last century. For several years, it was full of burglars and vandals. A new stage in the history of the old station began in 1985, when a scientific community became interested in it. For many years, scientists have searched for a suitable location for a secret lab. In the 80s the laboratory was set in the abandoned tunnels of the station. The test facility, which carried out various physical experiments, is still working now. That’s a protected object, so tourists are allowed visiting the building of the abandoned station only in the framework of organized tours. … Read further

Search touristic sites on the map of Huesca

Sightseeing in regions nearby Huesca

Zaragoza
We should also mention other attractions of Zaragoza - old churches created in the XI-XVII centuries - Santa Maria Magdalena, San Pablo, San Gil, San Miguel, San Ildefonso, Vesetas monastery; interesting art museums with paintings by Goya, Rembrandt, Velasquez and Renoir, Greco, Kamon Aznar, Monet, and Sorolla, Rubens, Van Dyck and Ribera. The Aljaferia palace plays a ... Open »
Formigal
Nowadays, tourists can get to Formigal from the Catalan capital, Barcelona. The city’s international airport accommodates flights from many countries of the world. In Barcelona, tourists can choose a bus transfer that will take them to the Spanish ski resort in five to six hours. It is also possible to make a domestic flight from Barcelona to Saragossa. It takes only one ... Open »
Lourdes
Much of the city's attractions are somehow connected with religion, and the most popular memorable souvenirs that tourists buy in Lourdes are figures of saints and beautiful icons. A huge number of pilgrims who began to flock to the city in the middle of the 19th century contributed to the active development of the city's tourism infrastructure. Today, in terms of the number ... Open »
Pamplona
Another old cathedral built the 14th century has been converted into Diocesan Museum that exhibits collections of Gothic altars and statues, as well as a collection of French relics belonging to the 13th century. Palace of Navarre is one of the most prominent monuments of baroque architecture. The paintings that decorate the halls of the palace have been created by Francisco ... Open »
Baqueira-Beret
The Snow Museum in the Val d'Aran is another important attraction in Baqueira-Beret. This museum opened its doors in December 2008. In the halls of this museum, visitors can see an exhibition dedicated to snow from scientific, ethnographic, and sporting points of view. The information present in the museum doesn’t concern the Aran Valley only. The exhibition is rich and ... Open »
Andorra la Vella
In the preserved old buildings there are interesting shops and restaurants, as well as popular hotels, so a walk through the historic district promises to be fascinating. It is recommended to prefer a foot walk through the territory of the historic district, as well as in the New City. The New City is a focus of modern hotels and business centers, so it is visited mainly by ... Open »

All about Huesca, Spain - sightseeings, attractions, touristic spots, architecture, history, culture and cuisine. Prepare your trip together with OrangeSmile.com - find out the 'must see' things in Huesca, which places to visit, which excursions to take, where the breathtaking views are waiting for you. Planning your trip with this travel guide will help your to get the most out of Huesca in few days.