«« BEGINNING - PART I
Video of flights over top monuments of Barcelona in HD format.
Use 'Full Screen' mode.
Museu Nacional d Art de Catalunya, Torre Agbar, Casa Mila, Olympic Stadium, and Hospital de Sant Pau are the next landmarks in the review. Just like in the beginning of the review, we have prepared a collection of historic facts and some awesome photographs for each of these top architecture monuments of Barcelona. Don’t forget to admire the look of these sights from a bird’s eye view. This view is available in the flyover video of the architectural skyline of Barcelona. After such a guide, it won’t be a hassle to make up a great plan of a real-life excursion tour in Barcelona. Ready, steady, go! 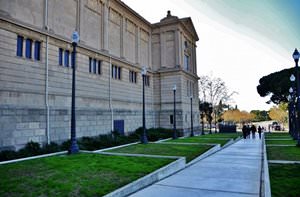 Facts:
» Museu Nacional d Art de Catalunya was created by merger of the collections of the Museum of Modern Art and the Museum of Art of Catalonia.
» The Romanesque Collection of the museum is considered one of the most complete in the world. It was formed on the basis of the unique Romanesque frescoes department; they are exposed at an appropriate architectural background.
» That’s the largest museum of Catalonia and the most important center of Spanish painting in the world.
» The museum is located at the foot of Montjuic at the National Palace built in 1929.
» If you delve into the history, then you can see that this museum was opened in 1934. However, the Spanish Civil War affected the activities of the museum, and the later was closed after having existed for only about two years. 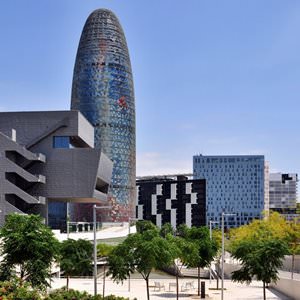 Facts:
» The height of the building is 145 meters. Alain Robert, known as Spiderman, climbed into the building Oct. 9, 2007.
» The water with bizarre outlines of Montserrat rock massif close to the town and the bell tower of the Cathedral of the Holy Family has inspired architects on creating this form.
» Torre Agbar is equipped with light sensors inside the space, which open and close the blinds as needed, thereby saving considerable energy. At the same time it serves as a window for natural ventilation.
» Agbar Tower is the building with a special double front. The facade of the tower consists of two layers. The first layer is thick concrete shell, and a second layer is a system of translucent glass blinds fixed at arm's length.
» The cost of the project amounted to more than 130 million euros. 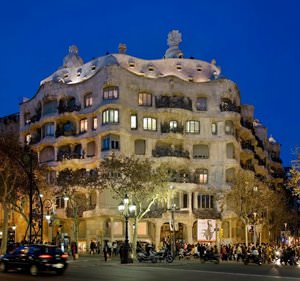 Facts:
» The second name of Casa Mila is La Pedrera.
» There are the famous sculptural figures, simultaneously acting as ventilation shafts and chimneys on the roof. The construction features lots of steps and views of Barcelona.
» Everything here meanders, bends and floats perfectly as a living organism. Casa Mila is anywhere from the building, to the ocean and the forest. It’s impossible to describe it, so you can only go and see.
» Casa Mila has no load-bearing walls, which means that plan of apartment is to the discretion of owners.
» Gaudi himself said about his work, “... the corners will disappear, and the matter will appear generous in its astral circularity, the sun will come here from all four sides and the image of paradise will appear there ... so my palace will be brighter than light.”
»  Perhaps the house is lovely; that's the best and most complete expression of the architectural concept of the nature of loyalty professed by Gaudi. It's kind of a man-made mountain with caves that open on the front spreading a powerful vitality. 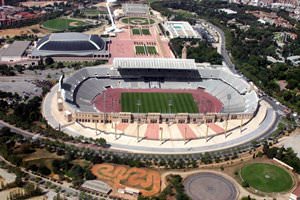 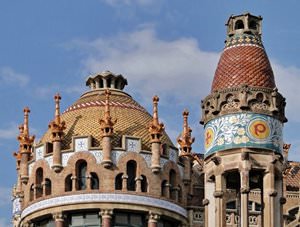 Facts:
» The Hospital de Sant Pau is the hospital complex in Barcelona designed by the Catalan modernist architect Lluis Domenech i Montaner. In 1997, the unique complex was recognized as a World Heritage Site by UNESCO.
» Although the current building dates back to the 20th century, the Hospital de Sant Pau was founded in 1401 by combining the six medieval Barcelona's hospitals. In 1991 it was awarded with the cross of St. George by the Government of Catalonia.
» The complex consists of a main building and 27 pavilions. All the buildings are connected by underground passages adapted for transportation of patients.
» Names of the best doctors in the hospital from the very beginning are seen on tiles on the facade of the main building.
» Symbols of apostles were used in design of the hospital. For example, the bull is the slowest animal, and the lion is more spiritual, but not yet capable to understand the idea of God.

This guide to architecture monuments in Barcelona is protected by the copyright law. You can re-publish this content with mandatory attribution: direct and active hyperlink to www.orangesmile.com.
Barcelona - guide chapters 1 2 3 4 5 6 7 8 9 10 11 12 13 14 15 16 17

Plan your own tour over Barcelona on the monuments map

Search for architecture monuments of Barcelona on the map

Tours through neighbours of Barcelona

Marseille
Cathédrale Sainte-Marie-Majeure is located at the site of the wooden church built in the 5th century, which is proved by excavations. In the late 19th century, it was decided to demolish the old building upon the order of Napoleon III. The citizens were not satisfied with this decision and held a protest demonstration. The old building was not dismantled completely. The new cathedral was built near it. The locals call it “strips on the ... Open »
San Sebastian
To build a summer cottage, the members of the Spanish royal family purchased the land at the coast of the bay. The residence was finished in 1893. The three-storey palace is located in the upper city. Servants lived on the upper floors. The basement was used for household needs. It is just a few meters from the beach. To link Antiguo with the other district of the city, the tunnel for vehicles was specifically built. The tunnel is dug ... Open »
Bordeaux
Cathedrale Saint-Andre was reconstructed many times. According to the chronicles, there had been buildings built in the 3rd century at the site. This construction was first mentioned in chronicles in 814. The Normans destroyed it. At the beginning of the 11th century, the first stone was laid in the cathedral's foundation in commemoration of the marriage of Louis VII and Eleanor of Aquitaine. In 1130, the northern Porte Royale ... Open »
Nice
Sainte-Reparate Cathedral was built in 1699 in honor of the patroness of Nice. According to the legend, young Reparata from Palestine professed Christian faith and died in agony for this when she was 12 years old. Angels brought a boat with the young saint to Nice, to the shore of the Angel Bay that was named after this event. The cathedral is located in an old part of the city. It is a typical construction built in baroque style. The ... Open »
Madrid
Palacio de Cibeles was originally designed as the central office of the telephone service, post and telegraph of Spain. The post office was built in 1918 and was called the Palace of Communication. Palace of Communication now houses the City Hall. This monumental building, decorating the area, represents one of the four pillars of modern civilization, power. Palacio de Cibeles consists of two buildings integrated with each other. This ... Open »
OrangeSmile.com - online travel reservation expert providing reliable car rental and hotel booking services. We feature more than 25.000 destinations with 12.000 rental offices and 200.000 hotels worldwide.
Secure Server