Sightseeing in Ourense - what to see. Complete travel guide 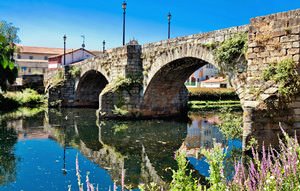 This city is surrounded by majestic mountain ranges; Orense is a major center of wine-making and a widely famous resort area. Orense is rich in iconic places, and the number of tours is not poor even if compared to the capital. The first mentions of the city refer to the 5th century. For many centuries these fertile lands have been the cause of the wars, and so the territory changed its owners several times. The first settlers were the Romans. Later the territory was conquered by the Visigoths, then by the Suevi, Moors and Normans.
Family holidays with kids in Ourense. How to entertain your child, things to show to children.
The Spanish city of Ourense is sure to interest not only adults but also for small travelers. Thus, the city is famous for its thermal springs that will be remembered by kids for a very long …

Open
Nowadays the old part of city is the location of one of the most important architectural monument preserved from the Roman times - the old bridge. Another major attraction is the Romanesque Cathedral, which western portal is considered the most beautiful one. It is decorated with magnificent sculptures, which beauty can by exceed only by the interior of the cathedral. Here you can see unusual lights, gilded statues, and carved sarcophagi.
Not far away from the cathedral begins the so-called "street of bars", by walking on which you will reach the largest gallery of the city - Klaustro de San Francisco. Here regularly take place numerous exhibitions, and so you can see works by contemporary painters and photographers. One of the most beautiful squares of the city called Plaza do Ferro is located just nearby. Around the square you will see small wooden houses built during the medieval period. Copyright www.orangesmile.com
Cuisine of Ourense for gourmet with top restaurants and cafe
The main feature of Ourense regional cuisine is the variety of seafood. It is mostly prepared in simple ways: boiled or grilled, and sometimes just fried in a pan with a small amount of oil, …

Open
Your tour program should certainly include excursions to the Archaeological Museum, the most valuable collections of which are considered Roman and Gallic sculptures. The most beautiful nature reserve of this place is Rio Sil Canyon. Here you can walk in pine forests and oak groves, enjoy boat rides on the river and see several old churches. 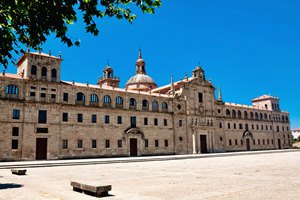 A lot of interesting architectural sights are concentrated near the Plaza Mayor. Here, a spectacular Art Nouveau-style building dating back to the late 20th century stands out. The structure is notable for the fact that it was erected on the ruins of ancient Roman buildings. Near the square, you can see the beautiful 19th-century Town Hall building. Next to it is an architectural monument of a much earlier period - the 12th-century Episcopal Palace.
Authentic traditions, festivals and lifestyle of Ourense inhabitants
People of Ourense are great admirers of their culture and traditions and are known for their love for lush and long holidays. One of the city's largest annual celebrations is the Xinzo de …

Open
Ourense has several beautiful ancient churches, and the Church of Santa Eufemia is among the most picturesque ones. The construction of this chic Baroque temple began in the 17th century and lasted almost 150 years. Today, one of the main features of the church is its original facade skilfully adorned with a stone carving. Looking at the church, you can notice some asymmetry. The thing is that one of the building's side towers remained unfinished. 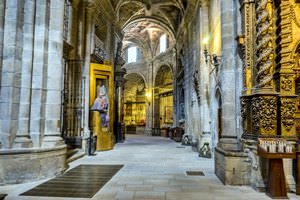 No less interesting Baroque-style monument is the Church of St. Mary built in the 18th century. It is notable for its magnificent old altar depicting the image of Saint Mary. This altar has been within the walls of the church since its foundation. The beautiful Baroque church was built on the site of an earlier one. Its interior still features some elements of the old temple.
Excursion over cultural sights of Ourense - 'must visit' points of interest
In Ourense, you can see a lot of interesting attractions, and far not all of them are of impressive age. Puente del Milenio Bridge opened in the city in 2001 is now Ourense's outstanding …

Open
A popular tourist attraction is Claustro de San Francisco founded in the 14th century. Today, the monastery's cloister is of great architectural value. Its building consists of 76 twin columns, as well as 63 arches. In the ancient convent, there is also a charming patio, which is now currently the most picturesque in Galicia. 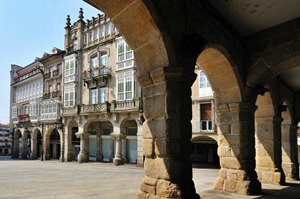 Away from the historic district of Ourense is the ancient Ponte Mayor bridge. This bridge over the river Minho was built during the reign of the Roman Emperor Augustus. The first major reconstruction of the bridge took place in the 13th century when it was supplemented by a new watchtower. Today, this tower is missing, because in the 18th century it was decided to restore the bridge's original look. Since the ancient bridge is away from many popular historic streets, unfortunately, it is often left without attention.

This guide to iconic landmarks and sights of Ourense is protected by the copyright law. You can re-publish this content with mandatory attribution: direct and active hyperlink to www.orangesmile.com.
Ourense - guide chapters 1 2 3 4 5 6 7 8

National and city parks around Ourense
♥   Natural Park 'O Invernadeiro' , 49.1 km from the center. On the map

Search touristic sites on the map of Ourense

Sightseeing in regions nearby Ourense

Galicia
Galicia features the famous pilgrimage center Santiago de Compostela annually attracting thousands of Catholics. The city is considered the capital of the province and the most beautiful settlement of these places. Its main attraction is the Cathedral, which was rebuilt several times; today, it is the architectural monument of indescribable beauty. Another attractive city ... Open »
Vigo
Vigo is a port city located not far from the mouth of the river that has the same name as the city. This is a large industrial and tourist center. Here you will find various types of rest. The choice of options is really wide and this is defined by the unique climatic conditions of the region. Cold winds of the Atlantics are stopped by Islas Cies, so nothing prevents the ... Open »
Santiago de Compostela
Santiago de Compostela is a city of the World pilgrimage. This is the so called third center of Christianity. Pilgrims from different parts of the world try to cross France in order to get to this beautiful town with ancient architecture. They also try to see the magnificent cathedral and amazing historical medieval buildings surrounding it - ancient houses, castles, and ... Open »
Braga
You should start your observing of the town from the cathedral that is surrounded by a picturesque park. This is one of the most beautiful buildings of the whole country. Its creation lasted over two hundred years and finished in the end of the 13th century. The facades of this building are decorated by ancient frescos and sculptures featuring saints. Step inside this church ... Open »
Guimaraes
Guimaraes is a beautiful city with its own traditional history, large number of unique monuments and architectural sights. The city consists of old streets and squares that are usually in a great state. Among the most famous sights of Guimaraes is the Royal Palace that has been abandoned for a long time. It was renewed only in XX century and used as the residence of the ... Open »
A Coruna
The city is a large port with well-developed oil processing, shipbuilding, aluminum, textile and food industries, fishing and weapon making. The city features wide selection of architectural sights. Among them is a lighthouse built in the Roman Empire times. The lighthouse is still working. There are also several Roman Churches in La Coruna. Tourists also like observing ... Open »

All about Ourense, Spain - sightseeings, attractions, touristic spots, architecture, history, culture and cuisine. Prepare your trip together with OrangeSmile.com - find out the 'must see' things in Ourense, which places to visit, which excursions to take, where the breathtaking views are waiting for you. Planning your trip with this travel guide will help your to get the most out of Ourense in few days.