Sightseeing in Logroño - what to see. Complete travel guide 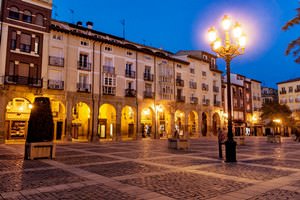 In the picturesque province of La Rioja in Spain, there is a small city that has a melodic name – Logrono. This city has become famous as the region’s wine capital. A settlement on the popular pilgrimage path in the past, Logrono has turned into a magnificent tourist destination that equally attracts foreign and domestic guests. Many visitors arrive in this city for the sake of seeing local churches and the main cathedral of Logrono that have honorable age. Besides sightseeing and exploring historic attractions, tourists enjoy sampling local wine. There are wineries in the vicinity of the city that are renowned for the exceptional taste of the wine that they produce.
If we head to the past of Logrono, we will find ourselves in a Roman settlement called Vareia. For centuries, the settlement was developing and growing in size, turning into one of the major centers of trade. In the 10th century, the king of Navarre engaged in a fight with the ruler of Castile for the right to own this land. After a long and exhausting fight, Castile rulers became the winners. In 1095, King Alfonso VI published a new set of rules that formalized laws for all cities and provinces of Spain.
There were large reforms across the country during the eleventh century, and these reforms concerned the social structures. The twelfth century was a terrible period for residents of Logrono, just like for many people in other regions of Spain. This is the time when the inquisition office opened in the regional capital. Many locals were accused of witchcraft or practicing black magic. The accused people were sent to court and then usually burned at the stake. Logrono started changing and developing only closer to the end of the 19th century. New manufactures and plants opened in the city. Logrono was turning into a major industrial center, and this fact helped to improve the infrastructure of the settlement. Copyright www.orangesmile.com
The Co-cathedral of Santa María de la Redonda is the symbol of the Spanish city. This is also the main religious attraction of the region. Nowadays, guests of the hospitable Spanish city are welcome to visit the gorgeous historic shrine and see works of the famous Belgian painter who was working in Logrono in the sixteenth century. The church is decorated with beautifully made images of the Virgin Mary and Jesus Christ. Besides them, there are drawings of local saints and numerous scenes that illustrate the life and deeds of Saint Francis. 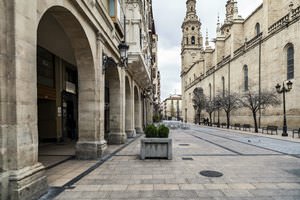 This co-cathedral has gained worldwide recognition for its architecture. Over the years, it has got the right to be an episcopacy center. Numerous tourists visit Logrono to see marvelous paintings and sculptures in the Co-cathedral of Santa María de la Redonda. These are true masterpieces of the 15th-17th centuries. A beautiful oval alcove with Christian sculptures decorates the main entrance to the church. Six centuries after the construction, the cathedral got a central part with eight cylindrical columns in the Flemish Gothic style, several chapels, and twin towers.
The church built as an addition to the Chapel of Virgin Mary is one more scared place in Logrono that is worth visiting. It is situated not far from the emperor’s palace, the place where King Alfonso VII lived. It took a century to build the sacred shrine. The construction works started in the 12th century. Several years later, the church was expanded by adding new parts of the building. The church underwent a global reconstruction in the 18th century. 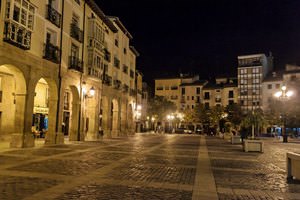 Nowadays, the holy building is home to fabulous sculpture compositions of Santa Maria la Antigua in the Roman style and Blessed Virgin Mary in the Flemish style. The central part of the church has become “home” to the statues of the saints that are very popular in the city – Saint Barnabas and Saint Matthew. The latter has been the patron saint of Logrono for centuries. The outer décor of the church has one really eye-catching element – the hexagonal spire that was added to the church in the eighteenth century. When taking a stroll in the city, tourists can see this spire from any part of Logrono.
Are you interested in modern art? There is an interesting thematic museum in the suburbs of Logrono. It was founded by a German person Reinhold Würth. The museum is named after him. The museum’s building is made of glass and looks nothing but impressive. The opening of the Reinhold Wurth Museum took place in 2007. Since that time, the venue has been attracting thousands of modern at connoisseurs from different parts of the world. The collection features the works of many talented Spanish masters and thousands of artworks. Gravures, paintings, sculptures, photographs – all of them are from the private collection of the founder. In addition to the permanent exhibition, the museum regularly hosts temporary exhibitions of talented masters. 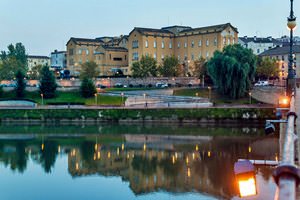 There is an airport in Logrono that, however, accommodates only domestic flights from other Spanish cities including the capital of the country and Barcelona. Having landed in Madrid, tourists can always buy tickets to intercity buses that go to Logrono. Besides buses, it is possible to reach the historical capital of La Rioja by train.
This guide to iconic landmarks and sights of Logroño is protected by the copyright law. You can re-publish this content with mandatory attribution: direct and active hyperlink to www.orangesmile.com.

City tours, excursions and tickets in Logroño and surroundings

Survived castles around Logroño
♥   Castle 'Castle of Clavijo' La Rioja, 12.6 km from the center. On the map

National and city parks around Logroño
♥   Natural Park 'Izki' , 26.3 km from the center. On the map

Search touristic sites on the map of Logroño

Sightseeing in regions nearby Logroño

Basque Country
The picturesque medieval town of Tolosa, which became the permanent venue for the colorful carnival, is a great point of interest. This wonderful city is the best base for exploring traditions and culture of the Basques. Amazing themed events regularly take place in the historic center of the city. In the medieval city is also an important religious object, Aranzazu monastery. ... Open »
Pamplona
Another old cathedral built the 14th century has been converted into Diocesan Museum that exhibits collections of Gothic altars and statues, as well as a collection of French relics belonging to the 13th century. Palace of Navarre is one of the most prominent monuments of baroque architecture. The paintings that decorate the halls of the palace have been created by Francisco ... Open »
Bilbao
Clean and cozy streets of Bilbao traditionally attract tourists. Here you will also see numerous green parks and widest selection of places of interest for any taste. Main sights of Bilbao include the Museum of Fine Arts, San Anton Bridge, the Museum of Guggenheim, Santiago Cathedral, the statue of Don Diego de Ar, Dona Casilda Park, and more. A chain of underground stations ... Open »
San Sebastian
The old town is represented by a set of winding streets, on which you will find cozy cafés, restaurants and bars. The central library of the city is located on the main square of San Sebastian. You will also find here a funicular, which leads to the top of Igeldo Mount, where is located the attraction park. The mountain features a magnificent view of the city, which is ... Open »
Burgos
The Miraflores Charterhouse is not just a monastery but a complex of buildings. It is situated on the Miraflores Hill. The White Fountain Park beautifully adorns the complex. King John II was the founder of this landmark. He ordered to construct a gorgeous building in 1441, but a fire destroyed it. The sad event took place in 1453. The building was rebuilt and became the ... Open »
Biarritz
Let’s talk about sights of this town. There are many places of interest in Biarritz. For example, museums – in the Museum of History you will find large number of items from the Emperor collection. The Marine Museum features large collection telling about the development of the underwater life in this region. Another popular sight among tourists is an Orthodox Christian ... Open »

All about Logroño, Spain - sightseeings, attractions, touristic spots, architecture, history, culture and cuisine. Prepare your trip together with OrangeSmile.com - find out the 'must see' things in Logroño, which places to visit, which excursions to take, where the breathtaking views are waiting for you. Planning your trip with this travel guide will help your to get the most out of Logroño in few days.