Sightseeing in Salamanca - what to see. Complete travel guide 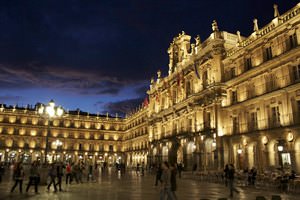 This is the largest cultural center of Spain, a famous university region and simply a beautiful old town. Your rest in Salamanca will be pleasant and interesting. The choice of attractions in Salamanca is so wide that even mentioning them all is an uneasy task.
Your active city break in Salamanca. Attractions, recreation and entertainment - best places to spend your day and night here
The city of Salamanca is of special attraction for young tourists as it boasts a variety of entertainment establishments offering exciting and unforgettable leisure experience. The city …

Open
The house decorated with shells is surely one of the most unusual architectural places of interest. This beautiful mansion was built in 1514, and its facade is decorated with hundreds of real shell valves. Diocesan Museum is widely known as the oldest cultural institution of the city. Here you will find a collection of paintings and statues, the most valuable of which is the figure of the Virgin Mary made of ivory. It is also worth noting the ancient cathedral Catedral Vieja, the building of which took place in 12 - 13 centuries. The building is created in best traditions of the Romanesque style.
Another marvelous creation of the medieval architects is Catedral Vieja, which facade is decorated with elegant carvings. The altar of the church, which is adjacent to the architectural complex, will be particularly interesting to visitors. The altar is decorated with delicate hand-painted gilding. The altar is the creation of the famous sculptor Jose de Churriguera and his best pupils. Copyright www.orangesmile.com
Advices to travellers: what you should know while being in Salamanca
1. Tourists visiting the city of Salamanca for the first time should necessarily visit a local tourist information office located near the Plaza Mayor. The office provides tourists with …

Open
Mayor Square located in the city center is the best place for walking. The square often becomes the location of ceremonies and mass events. It is always very crowded; travellers are photographing in front of beautiful homes, and local residents relax, sipping coffee leisurely in outdoor restaurants. The Provincial Museum of Fine Arts is the most visited cultural institution. The nine halls of the museum feature works by famous Spanish painters of 16 - 20 centuries. 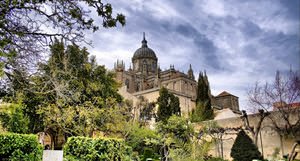 A unique University of Salamanca is situated in the historic area. It is an important historical monument. The university was founded in 1218 and is officially considered to be the oldest institution in Spain. Until now, it is an important educational center of Europe. The building, which guests of the city can see today, was constructed in the 14th century. Its facade is artfully designed.
Cuisine of Salamanca for gourmet with top restaurants and cafe
Attractive eating houses and cozy cafes are scattered in Salamanca at every step. The Pibe restaurant is of great popularity among city guests. The restaurant is located near a bus station. …

Open
Not far from the university, is a charming Patio de las Esquelas formed by the most beautiful buildings in Baroque and Renaissance style. Each building has its own unique features. Some of them are characterized by spectacular exterior design, others have preserved exclusive interior work. A historical museum occupies one of the buildings nowadays. Admirers of contemporary art will be interested in visiting Artium Domus Museum, whose opening took place in 2002. The location of the museum was an ancient building, that used to be a prison. After a lengthy renovation, they placed an invaluable collection of works of art in the former cells for prisoners. A collection of paintings in avant-garde style is of particular interest. This museum is available for free.

The ancient monastery of San Esteban was kept till now. Its construction began in 1524 and lasted almost a hundred years. Nowadays, the building of the monastery represents a huge architectural value. Its facade is decorated with a masterful carving. In the monastery church, it was possible to preserve the most beautiful altar of the beginning of the 17th century.
Excursion over cultural sights of Salamanca - 'must visit' points of interest
Salamance is a buzzing student city featuring planty of architectural and historical sites and landmarks. Among remarkable symbols of the city tourists will discover the Casa de las Conchas …

Open
A vivid architectural monument in the late Roman style is the church of San Martin. It was built in the 12th century. Despite numerous changes and reconstructions, some elements of the church have remained in a pristine way. On the north side of the building, you can see a beautiful bas-relief with the image of St. Martin. It has not changed externally for more than 700 years. 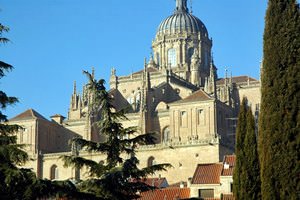 The Church of the Holy Spirit is a historical monument of a later period. Its construction took place in the 16th century. Miniature carved pinnacles are an important distinctive feature of the building. They frame the church building around the perimeter. The interior design is also incredibly interesting. It retains the main altar, created in 1659.

This guide to iconic landmarks and sights of Salamanca is protected by the copyright law. You can re-publish this content with mandatory attribution: direct and active hyperlink to www.orangesmile.com.
Salamanca - guide chapters 1 2 3 4 5

City tours, excursions and tickets in Salamanca and surroundings

Survived castles around Salamanca
♥   Castle 'Alcázar of Salamanca' Salamanca, 2 km from the center. On the map

♥   Castle 'Castle del Buen Amor or Castle of Villanueva de Cañedo' Salamanca, 21.2 km from the center. On the map

National and city parks around Salamanca
♥   Cave 'La Covatilla' , 68.2 km from the center. On the map

Sights around Salamanca from our guide 'Extreme places on Earth' 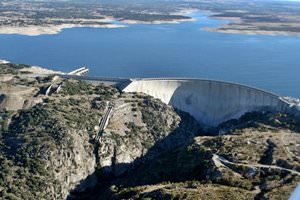 Distance from Salamanca center - 65.5 km.
For about 50 years Almendra Dam is one of the hugest in Spain, today it is connected with the Villarino Power Station. The construction of the dam is quite complex. At first there was build a 14 meters long underground tunnel that was designed to electricity output. It is quite interesting that after the water removing water goes to another river – Douro. The station capacitance is 810 megawatts. Notwithstanding the considerable dam’s age, Almendra Dam is still one of the tremendous constructions of Spain. … Read further 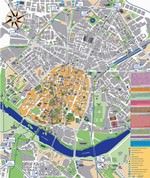 Search touristic sites on the map of Salamanca

Sightseeing in regions nearby Salamanca

Valladolid
Santiago Street is considered the center of the city. If you take a walk along it, you can reach Mayor Square. All most beautiful buildings of the city are located around the square or nearby it. The city hall is also situated nearby and a famous Valle Market occupies the opposite side. You won’t even notice how quickly the day passes away if you dedicate it to observation ... Open »
Madrid
Thyssen-Bornemisza. Thyssen-Bornemisza is one of the best museums in Madrid , which is based on a private collection of Baron Hans Heinrich Thyssen-Bornemisza. Over time, the majority of the collection has come into the possession of the country. The exposition is represented by paintings of the XIII-XX centuries, among which one will find many great paintings by Goya, ... Open »
Leon
Among other notable architectural sights of the city are Casa de los Botines and Casa de los Gusmanes palaces. Approximately 30 kilometers away from Leon is located a beautiful church San Miguel de Escalada. It was built by the Mozarabs. Tourists are also offered to visit the museum of Can Isidoro basilica that exhibits the masterpieces of church art of XI-XII centuries, ... Open »
Toledo
A medieval fortress is the most famous historical monument of this place. Nowadays it has been turned into Museum of Siege. The exposition of the museum will provide you with information about the heroic past of the fortress. During its long history the fortress survived in more than one storm. Several times it was destroyed and rebuilt. Art lovers should definitely visit ... Open »
Burgos
Nowadays, this graceful building is a prominent landmark of gothic style. The gothic church has coats of arms that belong to the founders of the shrine. Inside, visitors will find a beautiful wooden altar. Moreover, the monastery is famous for numerous tombs. This is where King John II of Castile and his daughter Isabel are buried. Burgos Airport accommodates flights from ... Open »
Guimaraes
Guimaraes is located on the north-west of Portugal. This is an important historical city, which population estimates around 53 thousands of people. Guimaraes is known as the first capital of the country. Even nowadays this place is a symbol of the first large city in Portugal. This statement is proven by numerous historical monuments and castle towers that have become the ... Open »

All about Salamanca, Spain - sightseeings, attractions, touristic spots, architecture, history, culture and cuisine. Prepare your trip together with OrangeSmile.com - find out the 'must see' things in Salamanca, which places to visit, which excursions to take, where the breathtaking views are waiting for you. Planning your trip with this travel guide will help your to get the most out of Salamanca in few days.