Sightseeing in Cuenca Town - what to see. Complete travel guide 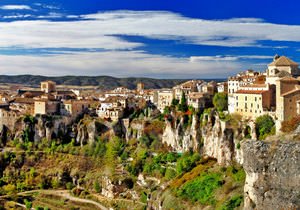 In Spain, tourists can visit the charming city of Cuenca that attracts tourists with an unusual peculiarity that makes this settlement truly unique. The historical part of the city and all houses within this area have an interesting location. When looking at buildings in Cuenca, it feels like they are growing directly from rocks and are floating above a deep canyon. Tourists are often worried that the buildings can fall down at any moment but this doesn’t happen. Local people use special building techniques that make houses in Cuenca strong and durable. The city is not big. It is easy to see all of its major landmarks during a stroll.
The first settlement in the area between the Jucar and Huecar rivers appeared yet during the pre-Roman times. Ancient Romans liked the beneficial location of this area that gave them a strategic advantage, and so they built a garrison here. Arabs conquered the region at the beginning of the 8th century. They called the area Kuvenka. Cattle breeding, weaving, and wool production started developing in the region. Residents of Cordoba introduced the art of crafting from ivory to the people of Kuvenka. These occupations remained the main sources of income for the town for ten centuries. The town was growing, and many beautiful mansions, churches, and schools appeared in it.
A great disaster happened in Cuenca in 1588 – a plague epidemic. This was not the only challenge for the settlement. When the town started returning back to life after the epidemic and numerous deaths, new problems appeared. Drought, locust invasions, and different diseases that stroke people and their livestock made life in Cuenca even more complicated. Despite numerous challenges, the city has managed to survive. In the 19th century, the city became the capital of Cuenca Province. Despite the capital status, the charming city hasn’t lost its attraction and uniqueness. Copyright www.orangesmile.com
Start your acquaintance with the main sights of Cuenca with a visit to a fabulous historic landmark – the Castle of Belmonte. The gorgeous castle is located in Belmonte, a village not far from Cuenca. Don Juan Pacheco, first Marquis de Villena, ordered to build the fabulous building. The castle has retained its original look until modern times. The construction of the castle started in the 50s of the 15th century. King Henry IV of Castile was hiding his daughter, Joanna la Beltraneja, in this castle as there were gossips about the legitimacy of the child. Juan Pacheco didn’t finish the castle. When he died, the Castle of Belmonte remained unfinished. 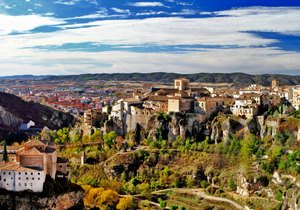 The Castle of Belmonte was practically in ruins in the 19th century, but the Empress Eugenia de Montijo decided to restore the building and bring it to its former glory. The castle became available for the public in 2010, so everyone can visit it now. There is a museum inside the building that exhibits the original furniture and decorations preserved for centuries.
Did you enjoy a walk in the halls of the Castle of Belmonte? In this case, visit one more gorgeous castle situated in this region – the Castle of Alarcon. This is no less beautiful and old building. Water surrounds the castle from three sides. According to local legends, the first fortress of the site of the castle appeared yet during the reign of Alaric II, the King of the Visigoths. Nowadays, the marvelous castle is open to the general public. Don’t forget to get to the top of the castle in order to see a fantastic view of the area. 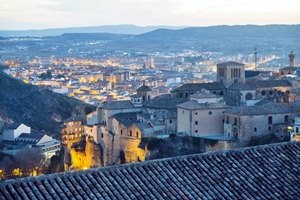 It is possible to see all the surrounding buildings outside the walls of the Castle of Alarcon. The castle was well-protected from invaders because it is built on a hill above the gorge. In the past, it was virtually impossible to conquer such a fortress. Nowadays, numerous tourists visit Alarcon. Moreover, this is a popular hotel, and tourists can book a room in it.
It would be a mistake not to mention Ciudad Encantada or the Enchanted City. This spectacular natural landmark definitely deserves a visit. The Enchanted City is located in the mountains near Cuenca. Beautiful pine forests surround the area. For centuries, winds, water, and carbon dioxide caused erosion of soft sedimentary formations. They formed stone statues with shapes similar to animals, household items, etc. There is even a stone that looks like a human face. 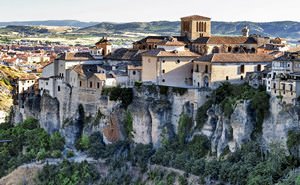 The Enchanted City has one more attraction – a stone labyrinth. It takes much time to get out of it, but, nevertheless, many visitors enjoy walking in it and trying to find the way out. The Stone Sea is one more prominent attraction of the site. The park has many fantastic stone sculptures that were also created by nature. There are fourteen sculptures in total, and each of them has its own name.
Having arrived in Madrid, tourists can get to Cuenca by train. The journey lasts roughly two and a half hours. It is also possible to get to Cuenca from Valencia. The ride will be three and a half hours in this case. Finally, there are buses that connect Cuenca and Madrid. The time spent on the bus will be just the same as the train ride.
This guide to iconic landmarks and sights of Cuenca Town is protected by the copyright law. You can re-publish this content with mandatory attribution: direct and active hyperlink to www.orangesmile.com.

City tours, excursions and tickets in Cuenca Town and surroundings

Survived castles around Cuenca Town
♥   Castle 'Tower Mangana' , 1.1 km from the center. On the map

National and city parks around Cuenca Town
♥   Natural Park 'Serrania de Cuenca' , 30.4 km from the center. On the map 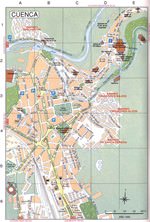 Search touristic sites on the map of Cuenca Town

Sightseeing in regions nearby Cuenca Town

Alcala del Jucar
Take a stroll on Algarrada Street, which leads directly to the castle, and you will reach the fortress. This building has three floors and an interesting shape – a hexagon with two oval side turrets. The inner décor of the castle was remade several times, so it is hard to recreate its original look. This is the reason why the current interior design of the castle is quite ... Open »
Albacete
You can start your acquaintance with the city from Museum de Albacete. The halls of the museum store a large collection of archeological finds and works of art from absolutely different epochs. If picturesque nature reserves attract you, make a walk in Abelardo Sanchez Park. This place will be particularly interesting for kids as here are traditionally organized engaging and ... Open »
Madrid
Thyssen-Bornemisza. Thyssen-Bornemisza is one of the best museums in Madrid , which is based on a private collection of Baron Hans Heinrich Thyssen-Bornemisza. Over time, the majority of the collection has come into the possession of the country. The exposition is represented by paintings of the XIII-XX centuries, among which one will find many great paintings by Goya, ... Open »
Toledo
A medieval fortress is the most famous historical monument of this place. Nowadays it has been turned into Museum of Siege. The exposition of the museum will provide you with information about the heroic past of the fortress. During its long history the fortress survived in more than one storm. Several times it was destroyed and rebuilt. Art lovers should definitely visit ... Open »
Valencia
On the territory of almost any hotel in Valencia there is a spacious beach, sports areas and restaurants. Visitors can try scuba diving, ride water ski or try to sail on a yacht on azure waves. You will find 18 new golf fields in Valencia, several tennis courts and a hippodrome. People, who enjoy active rest, will definitely like excursions on picturesque suburbs, climbing ... Open »
Castellón de la Plana
The region, which is currently the location of Castellon de la Plana, was inhabited yet during the ancient time. Archaeological excavations only prove this. Scientists discovered settlements of the Neolithic time, as well as traces of Iberians, Romans, and Mauritanians. This settlement became a town in 1252 when the territory of Castellon de la Plana was united with Aragon. ... Open »

All about Cuenca Town, Spain - sightseeings, attractions, touristic spots, architecture, history, culture and cuisine. Prepare your trip together with OrangeSmile.com - find out the 'must see' things in Cuenca Town, which places to visit, which excursions to take, where the breathtaking views are waiting for you. Planning your trip with this travel guide will help your to get the most out of Cuenca Town in few days.