Sightseeing in Burgos - what to see. Complete travel guide 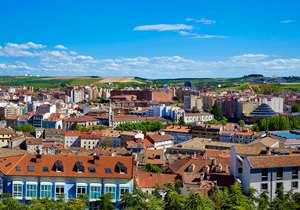 The heart of Castile, Burgos is a charming city that is situated on a high hill. The height of the hill is eight hundred meters. Below the hill, there is a picturesque Castile valley. Burgos is a popular tourist destination. In order to see numerous landmarks that date back to different historical periods, visit old guesthouses and mansions of the nobles, walk on elegant bridges, and spend unforgettable moments at one of the city’s silent squares. Thousands of foreigners visit this wonderful place.
Initially, Burgos had solely strategic and military importance. In the ninth century, Diego Rodríguez "Porcelos", the count of Castile, ordered to build a castle on the site of modern Burgos. The main purpose of the castle was to become a Christian frontier and protect the land from invasions of Muslims. Thanks to Porcelos, Burgos became the center of the county and then the center of the Kingdom of Castile. Many peasants from the nearby villages and settlements moved to Burgos and settled near the fortress wall. The city became more populous and started growing in size.
Burgos became a prosperous place thanks to active trade with Bilbao where merchants exchanged their wool to wheat and metal. However, the city started losing its importance when Ferdinand II became the ruler. The new king stopped business relations with the port cities in the north. The new trading road, which crossed Madrid, also had a negative impact on commerce in Burgos. This was not the only trouble that the city had to endure. A plague epidemic drastically decreased the population of the city, and then a devastating fire destroyed the castle in 1736. Burgos managed to regain its former position only in the 20th century. Copyright www.orangesmile.com
The Gothic Cathedral is a beautiful landmark of the city. It took three centuries to build it. The shape is the building is reminiscent of a Latin cross. The building’s length is eighty-four meters, and its width is fifty meters. The main portal of the cathedral is situated in the west part of the building. It is called in the name of Our Lady. There are also several naves, one of which is central. 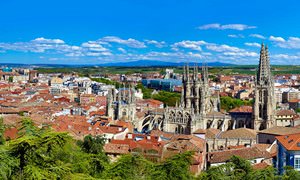 Virgin Mary is very popular in Burgos, so all icons in the cathedral are dedicated to her. Local people regularly visit the cathedral to pray to Our Lady. The southern part of the church has the sacred gate with a statue of Jesus Christ and the angels surrounding him. The gate with twelve apostles decorates the northern part of the cathedral. The cathedral exhibits a famous artifact, the sword of El Cid, a popular national hero.
Are you searching for new varieties of wine? In this case, consider making a journey to the city of Penafiel that is situated approximately 100 kilometers away from Burgos. This city is home to a popular attraction – the Penafiel Castle. Nowadays, this castle is home to the Museum of Wine. The name of the castle literally means “a reliable rock”. Unfortunately, the castle turned out to be not so reliable and solid. The beautiful building turned into ruins in the 19th century. Restoration works started in the 19th century and ended in the 20th century. This helped to save the castle, but many original elements of inner décor were lost forever. Modern materials added a breath of fresh air to the antique style of the building. 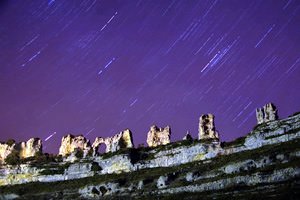 Despite the fact that the castle has some new elements, it never ceases to amaze guests of the city with its grandiose look. The castle rises proudly above the city and looks like it is floating in the air. A visit to this castle is an amazing opportunity to sample different varieties of wine in the Wine Museum. If you like the taste of some wine, you can buy it right away.
The Miraflores Charterhouse is not just a monastery but a complex of buildings. It is situated on the Miraflores Hill. The White Fountain Park beautifully adorns the complex. King John II was the founder of this landmark. He ordered to construct a gorgeous building in 1441, but a fire destroyed it. The sad event took place in 1453. The building was rebuilt and became the Miraflores Monastery. 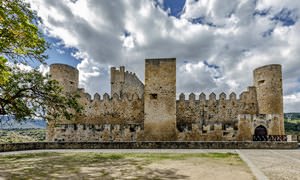 Nowadays, this graceful building is a prominent landmark of gothic style. The gothic church has coats of arms that belong to the founders of the shrine. Inside, visitors will find a beautiful wooden altar. Moreover, the monastery is famous for numerous tombs. This is where King John II of Castile and his daughter Isabel are buried.
Burgos Airport accommodates flights from Barcelona. After that, you need to take a taxi to the city center – there are always many taxis near the entrance to the airport. It is also possible to get to the city center by bus – you need to take bus #25. It takes four hours to get to Burgos from Madrid by train, two hours – from Leon, and one and a half hours – from Valladolid. Finally, there is a regular bus that connects Burgos and Madrid.
This guide to iconic landmarks and sights of Burgos is protected by the copyright law. You can re-publish this content with mandatory attribution: direct and active hyperlink to www.orangesmile.com.

City tours, excursions and tickets in Burgos and surroundings

National and city parks around Burgos
♥   Natural Park 'Montes Obarenes-San Zadornil' , 60.8 km from the center. On the map

♥   Natural Park 'Lagunas Glaciares de Neila' , 63 km from the center. On the map

Sights around Burgos from our guide 'Extreme places on Earth' 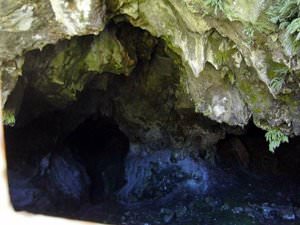 Distance from Burgos center - 11.9 km.
Scientists discovered the remains of ancient people while exploring caves. They lived on our planet more than a million years ago. Stone tools were also found in the cave. Both the most primitive and more advanced tools dating back to the Bronze Age were among them. Artifacts found in the cave are actively used for a variety of research today. Research is ongoing in the cave today. The prehistoric quarry was one of the last finds. Limestone has been mined there for hundreds of years. In addition to ancient fossils, a mural was also discovered in the cave. Dating of many of the detected images remains impossible. … Read further 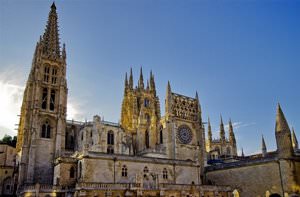 Distance from Burgos center - 0.9 km.
The Western facade is one of the most valuable elements in the cathedral's architectural appearance. It has been almost unchanged since the 15th century. The most famous and talented architects and artists of Spain participated in the construction of the cathedral in Burgos. The beautiful French cathedrals served as the main example for them during their work. The luxurious Gothic building inherited the unique features of the cathedrals of Reims and Paris. Its original spires are more reminiscent of traditional German architecture. … Read further

Search touristic sites on the map of Burgos

Sightseeing in regions nearby Burgos

Logroño
Nowadays, the holy building is home to fabulous sculpture compositions of Santa Maria la Antigua in the Roman style and Blessed Virgin Mary in the Flemish style. The central part of the church has become “home” to the statues of the saints that are very popular in the city – Saint Barnabas and Saint Matthew. The latter has been the patron saint of Logrono for centuries. ... Open »
Valladolid
Once Valladolid was the capital of Spain; today this is a large industrial center that doesn’t stop surprising its guests by wonderful architecture and hospitable atmosphere. Santiago Street is considered the center of the city. If you take a walk along it, you can reach Mayor Square. All most beautiful buildings of the city are located around the square or nearby it. The ... Open »
Basque Country
It’s worth noting a variety of natural attractions of the island, including the mysterious cave of Cueva de Santimamine. Mundaka watershed is of particular interest; the adjacent area was declared a nature reserve of world importance. These unique reserves were chosen as habitat by hundreds of rare species of birds attracting not only curious travelers, but also professional ... Open »
Bilbao
Clean and cozy streets of Bilbao traditionally attract tourists. Here you will also see numerous green parks and widest selection of places of interest for any taste. Main sights of Bilbao include the Museum of Fine Arts, San Anton Bridge, the Museum of Guggenheim, Santiago Cathedral, the statue of Don Diego de Ar, Dona Casilda Park, and more. A chain of underground stations ... Open »
Santander
Lovers of cultural enrichment will find many free museums in Santander. These are the Museum of Fine Arts with its collection of Spanish paintings of XV-XX centuries; Maritime Museum, near the entrance of which is located a huge exhibit of marine life - the skeleton of a whale; you will also find rare items got from the sea bottom in this museum; Museum of Ancient History and ... Open »
Leon
... Open »

All about Burgos, Spain - sightseeings, attractions, touristic spots, architecture, history, culture and cuisine. Prepare your trip together with OrangeSmile.com - find out the 'must see' things in Burgos, which places to visit, which excursions to take, where the breathtaking views are waiting for you. Planning your trip with this travel guide will help your to get the most out of Burgos in few days.