«« BEGINNING - PART I
Video of flights over top monuments of Madrid in HD format.
Use 'Full Screen' mode.
In this article, dedicated to the architecture of Madrid, we will 'fly' over such iconic historical monuments as Palacio de Cibeles, Almudena Cathedral, Museum of Natural Sciences, and Santiago Bernabeu Stadium. In addition to the virtual flight video, we offer the most important and interesting facts about every landmark, including high-quality photographs. You can also use this article to make your own excursion tour in Madrid. Simply use the icon

to locate the object of interest on the map of Madrid. 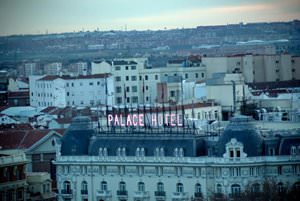 Facts:
» Palacio de Cibeles was originally designed as the central office of the telephone service, post and telegraph of Spain.
» The post office was built in 1918 and was called the Palace of Communication.
» Palace of Communication now houses the City Hall.
» This monumental building, decorating the area, represents one of the four pillars of modern civilization, power.
» Palacio de Cibeles consists of two buildings integrated with each other.
»  This construction is one of the first examples of modernist architecture. 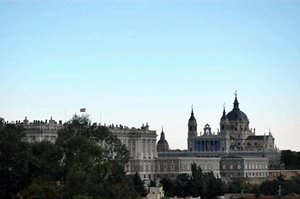 Facts:
» Almudena Cathedral is decorated with the statue of the Holy Virgin of Almudena, which is also called the statue of the Blessed Virgin, who is the patron saint of Spanish capital.
» According to the legend, the figure of the Virgin Mary was found here in the wall of an ancient Arab fortress, and the Cathedral was built at that site. Almudena is translated from Arab as ‘the fortress’.
» The main altar of the Cathedral of Granada is made of green marble.
» According to the legend, the statue of the Blessed Virgin Almudena was brought to Spain by the apostle James, who preached the Christian faith in the Pyrenees in the 1st century.
» The casket containing the remains of St. Isidro is kept in a duct under the altar. 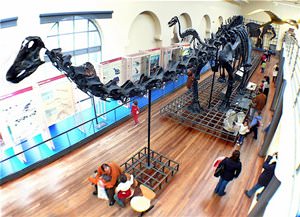 Facts:
» Museum of Natural Science features an important and unique collection of scientific specimens of nature. The venue actively develops the program of exhibitions and educational activities to all visitors.
» The museum is considered one of the largest centers in the whole Mediterranean region and has a collection of 6 million exhibits.
» In 1815 the museum was renamed and became known as the Royal Museum of Natural Sciences.
» Royal Cabinet of Natural Sciences was established during the reign of Carlos III, when the Spanish merchant Pedro Franco Dávila agreed to sell his collection of antiquities to the Spanish king.
» During the Spanish Civil War, the museum was badly damaged in Madrid bombings and was closed for restoration. 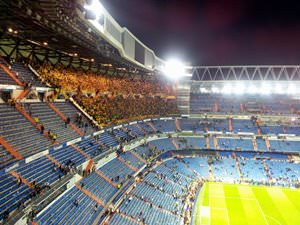 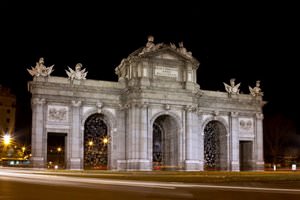 Facts:
» The Puerta de Alcala is one of the main symbols of Madrid, the hallmark of the city.
» Puerta de Alcala was built in the end of the 16th century as a gift to Princess Margaret of Austria.
» After his coronation, Charles III traveled with a large retinue through the Puerta de Alcala and he didn’t like the gate.
» In 1823, Alcala gate were fired by cannon shrapnel. Traces of shrapnel can be seen these days.
» In 1921, at the gate of Alcala anarchists have murdered President of the Council of Ministers, Eduardo Dato Iradier.
»  The Gates is adorned with the head of a lion, a cornucopia and the Greco-Roman deities of rumors and devotion to people. The gate itself is made of granite blocks. 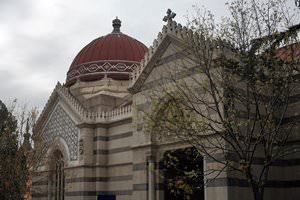 Facts:
» Pantheon of the Illustrious Men was conceived in 1837; the main goal was to create the National Pantheon to house the remains of the great Spanish for at least 50 years after their death.
» Currently, the tomb monument designed for the burial of famous people stands in the gallery of the Basilica.
» For some time, there have also been the remains of Prima, Palafox and Castaignos, but in the end they were moved to their places of origin.
» Gravestones are works of art, made by famous sculptors like Mariano Benlliure, Agustin Querol, Arturo Melida, Pedro Estany and Federico Aparisi.
» This Basilica, built on the site of the former Dominican convent of the 16th century, houses the Roman image of the Virgin Mary.

This guide to architecture monuments in Madrid is protected by the copyright law. You can re-publish this content with mandatory attribution: direct and active hyperlink to www.orangesmile.com.
Madrid - guide chapters 1 2 3 4 5 6 7 8 9 10 11 12 13 14 15 16

Plan your own tour over Madrid on the monuments map 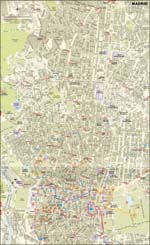 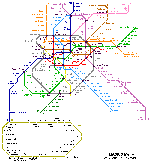 Search for architecture monuments of Madrid on the map

Tours through neighbours of Madrid

San Sebastian
To build a summer cottage, the members of the Spanish royal family purchased the land at the coast of the bay. The residence was finished in 1893. The three-storey palace is located in the upper city. Servants lived on the upper floors. The basement was used for household needs. It is just a few meters from the beach. To link Antiguo with the other district of the city, the tunnel for vehicles was specifically built. The tunnel is dug ... Open »
Sevilla
The Seville Cathedral is currently the largest Gothic cathedral in Europe. The Cathedral was built in 1401 - 1519. The length of the cathedral is about 116 meters, and the width is 76 m. The height of the cathedral is 42 meters, and the height of the bell tower is 105 meters. The cathedral is notable for its numerous relics and treasures including paintings by Murillo, Velazquez, Zurbaran and Goya in the Cathedral Bell Tower. The temple is ... Open »
Porto
The Porto Cathedral is the oldest and most revered in the city. It started to be built in 1110. An urban settlement was gradually growing around it. For centuries, a lot of interesting events took place at the cathedral. In 1387, King John I and English Princess Philippa of Lancaster got married. The son of John I, Henry, was baptized here. He was called “a sailor”, although he never took part in expeditions but organized such ... Open »
Lisbon
The National Pantheon is one of the most impressive sights of Lisbon. This building was called the National Pantheon only in 1966, during the reign of dictator Antonio De Oliveira Salazar; previously it was the St. Engrasia Church. The church was built in the 12th century in Portuguese Baroque style. Interior of the construction complements the exterior. The floor and walls of the building are decorated with colored marble patterns, and the ... Open »
Barcelona
Museu Nacional d Art de Catalunya was created by merger of the collections of the Museum of Modern Art and the Museum of Art of Catalonia. The Romanesque Collection of the museum is considered one of the most complete in the world. It was formed on the basis of the unique Romanesque frescoes department; they are exposed at an appropriate architectural background. That’s the largest museum of Catalonia and the most important center of Spanish ... Open »
OrangeSmile.com - online travel reservation expert providing reliable car rental and hotel booking services. We feature more than 25.000 destinations with 12.000 rental offices and 200.000 hotels worldwide.
Secure Server