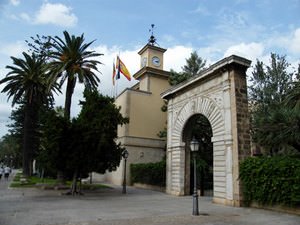 Several people made their impact on the development and culture of the city. This fact creates special unusual atmosphere of this place. The central part of Palma de Mallorca is more like a small village. Once upon a time here lived craftsmen; later fortifications, were built here, and today you will find here only small buildings that are not typical for modern cities.
Cuisine of Palma de Mallorca for gourmet with top restaurants and cafe
Local cuisine of Palma de Mallorca features great diversity of mouth wetting dishes. Original treats made of sea foods and vegetables are in the heart of ethnic menu. The most popular …

Open
The most ambitious architectural places of interest of this place are the Cathedral and Bellver Castle. The construction of the cathedral started in the 13th century and lasted more than 250 years. This is a wonderful example of Gothic architecture. The castle has been renovated not long ago, and so now it is ready to appear in front of tourists in all its glory.
An old Arabic Church named Palacio Real de La Almudaina is located nearby. Today the palace hosts meetings of the government and large events. It would be a mistake to assume that the central part of the city is not so remarkable. In fact, besides craftsmen houses here have survived several mansions, which have once been homes of the noblest men. Many of them were built in the 15 -16 centuries and now converted into museums. You can walk in beautiful courtyards and view these mansions. Today every piece of furniture and decoration of interior is a true museum item. Copyright www.orangesmile.com
Authentic traditions, festivals and lifestyle of Palma de Mallorca inhabitants
In the course of a year Palma de Mallorca holds more than a dozen of bright festivals and carnivals attracting tourists from all over the world. Each fest features its unique peculiarities …

Open
On the territory of the city you can find numerous churches, cathedrals and monasteries. Every shrine is a beautiful building made in accordance with best traditions of the architectural style of the past. Here we should definitely mention the monastery of Sant Francesc, Santa Clara Monastery and Monti-Sion Church - the oldest religious sites of this city. Just like any major tourist center, here you will find a large selection of shops and restaurants, the majority of which are concentrated on the Jaime Street. 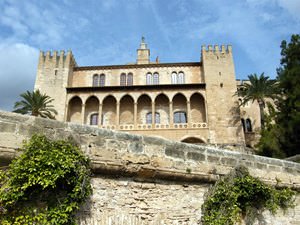 Besides numerous historic sites, the resort is also famous for its natural attractions. Special attention should be paid to Caves of Arta located in the vicinity of the city. The main feature of the caves is its millennial stalactites and stalagmites. The shape of some of them is so harmonious that they seem to be man-made. The ceiling height in some halls of the cave reaches 40 meters. Now its inner space is decorated with a carefully planned artistic illumination system. These caves are of great scientific interest, as traces of ancient people were found here.
Excursion over cultural sights of Palma de Mallorca - 'must visit' points of interest
The most remarkable spot of tourist attraction and the most significant religious landmark of the Balearic Islands is the Cathedral of Santa Maria of Palma (Catedral de Santa María). Its …

Open
One of the largest on the island is the Dragon Cave - the total length of its passages is about 2,000 meters. In this cave, you can admire not only its unique geological formations but also fabulous underground lakes. A beautiful lighting system was also installed in the accessible cave halls. 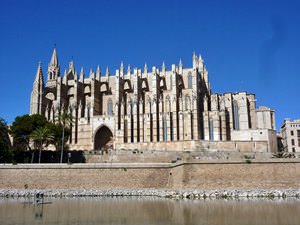 Those who like walks in historic places should definitely head to the city center to explore the old trade exchange building called La Lonja.

Built back in 1456, it has managed to retain a lot of beautiful original architectural elements after more than 500 years Once the building surrounded by slender rows of palm trees and exotic plants was the center of the island's economic life. Originally used for storing grain, now it is a venue for various exhibitions, cultural and official events.
Your active city break in Palma de Mallorca. Attractions, recreation and entertainment - best places to spend your day and night here
After an exploration tour over the significant and symbolic landmarks and sights of the city tourists can set off to one of the scenic beaches of the destination. Palma de Mallorca offers …

Open
An important sight for the resort is its aquarium, which is one of the largest aquariums in Europe since its opening. It presents 55 aquariums of various sizes, in which there are a total of about 8,000 sea creatures. Here you can see some contact aquariums - visitors are allowed to touch their inhabitants. The huge oceanarium has another interesting feature: on its roof, there is a luxurious recreation area with a tropical garden. 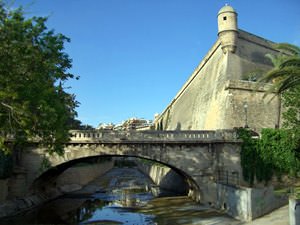 Fans of unusual entertainment are sure to use the opportunity to ride the train Palma de Mallorca - Soller. This train is historic, today on the railroads you can see wagons produced in the early 20th century that have preserved a beautiful old lining. Traveling in such an unusual atmosphere, from the windows, passengers of the train can admire wonderful natural landscapes they meet on the way.

This guide to iconic landmarks and sights of Palma de Mallorca is protected by the copyright law. You can re-publish this content with mandatory attribution: direct and active hyperlink to www.orangesmile.com.
Palma de Mallorca - guide chapters 1 2 3 4 5 6 7

Survived castles around Palma de Mallorca
♥   Castle 'Castle of Bellver' Balearic Islands, 2.5 km from the center. On the map

♥   Castle 'Castle of Bendinat' Balearic Islands, 7.2 km from the center. On the map

♥   Castle 'Castle of Santueri' Balearic Islands, 48.9 km from the center. On the map

♥   Castle 'Castle of Cabrera' Balearic Islands, 54.3 km from the center. On the map

National and city parks around Palma de Mallorca
♥   Natural Park 'Sa Dragonera' , 28.1 km from the center. On the map

Search touristic sites on the map of Palma de Mallorca

Paguera
Besides relaxing on beaches the resort offers large variety of hiking trails, because there are so many beautiful places here. As a rule, they all are located in remote parts of the resort. It is also worth telling a few words about the hotels of Paguera. The most popular is the Beverly Playa, which is located close to the center. It is perfect for those tourists, who want ... Open »
Mallorca
Mallorca is the island that is the part of the Balearic archipelago. Mallorca is its main island, as well as one of the most prestigious, popular and eco-friendly resorts of the Mediterranean Sea. This place can be called a paradise for tourists, as this island is great for rest all year long. In Mallorca you will find magnificent beaches with fine golden sand, crystal clear ... Open »
Ibiza Island
Island of Ibiza is associated with sea, sun, night clubs and lively parties, that’s why it attracts lots of tourists in summer time. The capital of Ibiza is the city of the same name. Ibiza is widely regarded as luxurious resort, but it is also highly recommended for family vacation. There is a number of appealing quiet resorts on the island. They may be really expensive in ... Open »
Menorca
This picturesque island traditionally amazes visitors by wonderful beaches with azure water, mountain landscapes and emerald valleys. Menorca is often called the museum under the open sky due to the large number of attractions. The largest town on the island is Mahon. Most valuable historical and architectural monuments are located near it. Moreover, you will not need to ... Open »
Ibiza
Ibiza is the youngest Mediterranean resort that is famous for its fantastically hospitable atmosphere, beautiful nature, wide choice of entertainments and best night clubs and discos in Europe. This is a true paradise for tourists who enjoy active rest, walks under the moon and loud entertainments. The resort is located on one of the picturesque islands on the Mediterranean ... Open »
Formentera
The length of this picturesque island is just 19 kilometers. Its name can be literally translated as "grain". The town was founded by the Romans far back in the prehistoric times. The fertile soils of this region have become a real treasure for first settlers. In the 5th – 7th centuries Formentera was already widely known as an agricultural center; later large deposits of ... Open »

All about Palma de Mallorca, Spain - sightseeings, attractions, touristic spots, architecture, history, culture and cuisine. Prepare your trip together with OrangeSmile.com - find out the 'must see' things in Palma de Mallorca, which places to visit, which excursions to take, where the breathtaking views are waiting for you. Planning your trip with this travel guide will help your to get the most out of Palma de Mallorca in few days.