Video of flights over top monuments of Sevilla in HD format.
Use 'Full Screen' mode.
The main landmarks, such as Museum of Fine Arts, Plaza de Espana, Torre del Oro, and General Archive of the Indies, attract thousands of visitors, who come to Sevilla from different parts of the world every year. Sevilla is incredibly rich in absolutely stunning landmarks and important historic sights. are true masterpieces of architecture and architectonics at the international level. It’s time to look at every landmark of Sevilla in detail from an unusual point of view – interesting facts with hi-res photos, enriched with a virtual flight over 3D copies of all the architectural monuments. 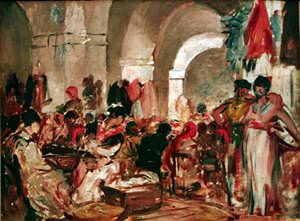 Facts:
» The Museum of Fine Arts is the art museum with a rich collection of paintings and sculptures.
» The building, which now houses the museum, originally belonged to the monastery of the Order of Merced Calzada de la Asuncion, founded by Peter Nolasco in the time of King Ferdinand III.
» The most interesting part of the building are its courtyards; Seville ceramics was used to decorate galleries.
» Initially, museum's collection was formed of paintings and sculptures from the surrounding churches and monasteries, so religious painting is widely represented in the museum. Works by Seville artists painting in Baroque style are very common in the collection.
» At present, the museum has 14 rooms, where Spanish medieval art, Renaissance art, the works of the great masters of Seville, the European Baroque painting and others are represented. 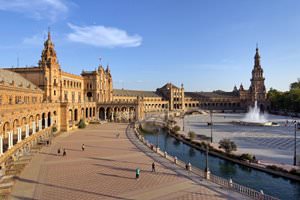 Facts:
» Plaza de Espana is the semi-circular complex of 200 meters in diameter situated in the Maria Luisa Park. It impresses with its size, beauty and panache.
» The park and the square were created in 1928 by a group of local landscape artists.
» The project is designed in neo-Mudejar and Art Deco style.
» The Plaza de Espana is decorated with a large fountain; the square is surrounded with buildings housing the municipality of Seville.
» The canal was dug along the square, in which you can swim in a small boat with oars.
» Star Wars. Episode II: Attack of the Clones and Dictator were shot on the square. 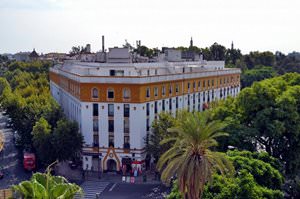 Facts:
» Torre del Oro is the Moorish tower erected in 1220 on the waterfront of the Guadalquivir to protect the harbor of Seville.
» The height of the tower is 37 meters.
» The tower was originally a part of the fortifications of Seville. Thick walls led from Torre del Oro to the Alcazar, but those walls haven’t survived to these days.
» Origin of the tower’s name (translated literally as ‘the Gold Tower’) is a subject of controversy. Some claim that the name comes from the golden tiles covering it, while others are sure that it stores gold brought from the New World.
» Currently, this dodecahedral tower houses the small Maritime Museum.

General Archive of the Indies, Sevilla

Facts: » The General Archive of the Indies is the archive containing valuable documents illustrating the history of the Spanish Empire in the Americas and the Philippines.
» The archive building is a fine example of Renaissance architecture. In 1987, the building of the archive and its contents were included in the UNESCO World Heritage List.
» The archive contains many materials on Indies from the first conquistadors to the end of the 19th century. For example, the archive can boast the journal of Christopher Columbus, as well as maps and plans of the colonial cities.
» At present the total length of the shelves in the General Archive of the Indies is 9 km; there are 43,000 volumes and more than 80 million pages created by the colony's administration.
» The building of the archive was renovated in 2002-2004. In the center of the building there is a courtyard. Obelisks are installed on the edges of the building, and the roof has a balustrade.

Facts: » The Palace of San Telmo is the Baroque residence outside the walls of old Seville, which houses the administration of the autonomous community of Andalusia.
» The building has being constructed since 1682 at the expense of the Inquisition as a school for orphans of seamen.
» Edges of the building are decorated with towers. Inside the palace there is a vast courtyard with a garden.
» The chapel is the most richly decorated department of the palace. The carved portal in Churrigueresque style (late Baroque stage in the development of Spanish architecture) may serve as an example of that trend; it was completed in 1754.
» The building facade is decorated with statues of 12 famous Sevillians.

Build your walking routes in Sevilla on the landmark map

Architectural landmarks in the regions around Sevilla

Lisbon
The National Pantheon is one of the most impressive sights of Lisbon. This building was called the National Pantheon only in 1966, during the reign of dictator Antonio De Oliveira Salazar; previously it was the St. Engrasia Church. The church was built in the 12th century in Portuguese Baroque style. Interior of the construction complements the exterior. The floor and walls of the building are decorated with colored marble patterns, and the ... Open »
Madrid
Palacio de Cibeles was originally designed as the central office of the telephone service, post and telegraph of Spain. The post office was built in 1918 and was called the Palace of Communication. Palace of Communication now houses the City Hall. This monumental building, decorating the area, represents one of the four pillars of modern civilization, power. Palacio de Cibeles consists of two buildings integrated with each other. This ... Open »
Porto
The Porto Cathedral is the oldest and most revered in the city. It started to be built in 1110. An urban settlement was gradually growing around it. For centuries, a lot of interesting events took place at the cathedral. In 1387, King John I and English Princess Philippa of Lancaster got married. The son of John I, Henry, was baptized here. He was called “a sailor”, although he never took part in expeditions but organized such ... Open »
Marrakech
The new railway station of Marrakech was built next to the old one, which had been working since 1923. The station building is modern and spacious. The main entrance, in the form of a high arch, is lined with a beautiful pattern in African style. The internal equipment has a modern set of amenities necessary for passengers. In addition to conventional cash registers, automated devices are installed. Employees who speak English are always ready ... Open »
Bilbao
Believers came to the Basilica de Begona to worship the patroness of sailors, the Virgin Mary. Services are daily held in the religious institution. Grand festivals dedicated to the Virgin are held here twice a year. The church for her glory started to be built in the 16th century. The construction lasted a hundred years. That is why the exterior of the building combines Gothic and Baroque architectural styles. In the 19th century, ... Open »
OrangeSmile.com - online travel reservation expert providing reliable car rental and hotel booking services. We feature more than 25.000 destinations with 12.000 rental offices and 200.000 hotels worldwide.
Secure Server