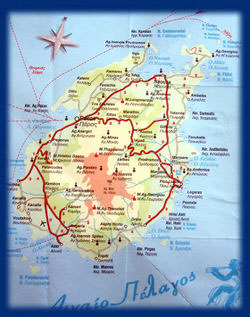 Interactive maps of hiking and biking routes around Paros

1. You can zoom in/out using your mouse wheel, as well as move the map of Paros with your mouse.
2. This interactive map presents two modes: 'Biking Routes' and 'Hiking Routes'. Use the '+' button on the map to switch between them.

This Paros map has two modes: 'Railway Network' and 'Landscape & Rural Map'. Use the '+' button on the map to navigate.

City tours, excursions and tickets in Paros and surroundings

Our guide to Paros

This is a parkland of natural origin and breathtaking beauty which is home to many exotic plants and flowers and numerous butterflies. The beauty of the scenery of the park is added with marvelous waterfalls. The valley gains its ultimate beauty in the summer time when its main inhabitants are in the peak of their activity. Travelers are offered to join organized tours to the Anlipsi island, which is of great … Open

The Cactus restaurant will be a perfect place for a family visit with kids. Tourists will find popular dishes of Greek cuisine in the heart of its menu. The youngest guests of the restaurant are offered a special menu. One of the major features of the Cactus restaurant is affordable pricing policy. Exotic meal admirers will love to visit the Magaya restaurant specializing in Mexican cuisine. Its menu offers a vast … Open

Active tourists cannot miss the opportunity to visit Antiparos Island, the main symbol of which is the wonderful Cave of Antiparos. Today it attracts travelers with beautiful stalactites and stalagmites. The cave has a huge historical value. The cave has its own unique sights. For example, here you can see a very unusual stalagmite that looks like an altar. Even the Christmas service was once held next to it. A … Open

Those preferring to rest in quieter places should pay attention to exotic Aghia Irini beach. It's one of the most beautiful beaches on the island surrounded with palm wilds. Despite its pristine natural beauty and harmonious atmosphere, Aghia Irini beach is an excellent choice for comfortable leisure. Lots of accommodation places and taverns are located there next to the coast. Scenic Pounda beach is very popular … Open

6. Local cafes and restaurants feature a high quality of goods and affordable pricing policy. All the cities of the island are subject to a following rule – the closer a restaurant to a buzzing center of the city the higher pricing policy it features. Travelers should not neglect local eateries in small towns of the island as these as well feature plenty of classy dishes and high standard service. 7. … Open

Among spa-hotels, Minois Village is worth special attention. Along with a wide selection of wellness services this hotel is also known for its unique local architecture. It occupies a formidable building with snow-white frontside; hotel rooms are decorated in white colors. The hotel offers its guests beautiful terraces with panoramic view over coastline and excellent sea water swimming pool. Acqua Marina resort … Open

Maps of Naxos
Plaka Beach is good for a quiet and secluded rest; you can find many attractive coves in its remote areas. The most crowded and busy beach is Agios Georgios located in the immediate vicinity of the capital. The beach is very safe, so it is ideal for families with young children. Surfers have long chosen Mikri Vigla, which is divided into two separate beaches by the big rocky ... Open »
Maps of Naxos
In the capital of the island is Naxos Fun Park that deserves a visit regardless of whether you are traveling with small tourists or without them. The entertainment available here includes water rides, slot machines, and pools for every taste. Apart from that, the park has an on-site cafe, and its favorable location on the waterfront by the Aegean Sea allows visitors to get ... Open »
Maps of Ios Island
You can find a lot of nightclubs in Chora. People joke that Chora is not the best place for families and elderly people. The most popular clubs are situated near the central square. They are Red Bull bar, Ios Blue, Jonis Electric Rock Bar, Shooters, Disco 69. All the clubs fall silent closer to the morning and people go to cocktail bars on the outskirts of the city. For ... Open »
Maps of Sifnos Island
Those who like fishing will also appreciate this island. There are a lot of marine inhabitants here, and local residents, many of whom earn their living by fishing, often act as instructors and are ready to explain all the subtleties of hunting for the local water inhabitants. You can fish from the shore and go to the open sea on a boat. Fishing with a spear can be ... Open »
Maps of Mykonos Island
There are various beaches on Mykonos for different tastes. Nammos Beach is popular among the cream of society. Casual tourists visit sandy Psarou and Plati Gialos. Active tourists should definitely visit Elia Beach. This place has a specific wind which makes the beach a perfect place to try windsurfing. However, experienced sportsmen can also improve their skills. Paradise ... Open »
Maps of Syros
Galissias village would be an ideal place for a family vacation, as its beaches are very quiet and clean. It’s also worth noting that the coast is well equipped; Galissias is the busiest and the most attractive beach resort on the island. Fans of beach holidays will love Foinikas and Poseidonia villages, which are known for their amazing sandy beaches too. Unlike noisy ... Open »
Maps of Tinos Island
Surfing is very popular with tourists. Many fans of this sport prefer Kolimbari Beach. Strong winds blow here on the north side of the island, especially in the summer months. High waves are formed here because of this. They are great for surfing. The conditions are suitable for both beginners and professionals. Even if you have never tried to stand on the board, you can use ... Open »
OrangeSmile.com - online travel reservation expert providing reliable car rental and hotel booking services. We feature more than 25.000 destinations with 12.000 rental offices and 200.000 hotels worldwide.
Secure Server