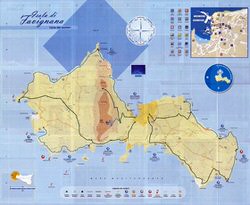 Interactive maps of hiking and biking routes around Favignana Island

1. You can zoom in/out using your mouse wheel, as well as move the map of Favignana Island with your mouse.
2. This interactive map presents two modes: 'Biking Routes' and 'Hiking Routes'. Use the '+' button on the map to switch between them.

This Favignana Island map has two modes: 'Railway Network' and 'Landscape & Rural Map'. Use the '+' button on the map to navigate.

Our guide to Favignana Island

Be sure to bring a Pinnocio from Favignava. The doll is a national Italian symbol. You can buy it in any size, from a keychain or magnet to a big toy in human growth. Pinocchio is something like a hero in Italy, that’s why this toy is very popular among tourists and locals. Puppets are also very popular here. If you visit Favignava on New Year holidays, you will find Befana or Epifania doll in the local shops. … Open

All the island's beaches without exception have very relaxed atmosphere; there is nothing to prevent enjoying the pristine beauty of nature. One of the most picturesque places on the island is Cala Rossa surrounded all around by towering limestone cliffs. Thanks to this reliable protection there is no strong wind and waves, so this secluded cove will appeal to those who like to rest at scenic sites. Water at this … Open

Favignana Island for children - what to visit

Le isole di Favignana is the largest island of 5 Aegadian Islands. Locals have been engaged in fishing for many years, tourism wasn’t popular on the island. But tourists with children started to come here a half of a century ago. Active and curious children will love the island. Favignana is a perfect place for children who are ready to explore the island on foot and gadgets have no importance for them. … Open

Magnificent beaches are one of the main treasures of Favignana Island, and Calla Rossa remains one of the most famous of them. Many claim this is the most beautiful beach on Sicily and one of the most picturesque beaches in Italy in general. Crystal clear water of different shades of blue is the main peculiarity of this gorgeous beach. Vacationers, who seek calm and trouble-free places, as well as fans of scuba … Open

Traditions and mentality of Favignana Island

The principle of bella figura is a significant part of Italian culture. It is translated as «the beautiful figure» Italians love to attract attention and they sometimes behave theatrically. Locals believe that they are public people and it is important to look decent. You will never meet an official in trainers or a baker in a suit on Favignava. A sailor will never wear an expensive brand suit. A housewife will … Open

Food plays an important role in the life of Italian people. It can be explained by their desire to get the most of life. True Italian gourmets are very scrupulous about the dishes they eat. Everything must be perfect: from the sauce which must be appropriate for the particular shape of pasta to wine and the company they will have lunch with. However, if you came alone to Favignava, don’t be upset. Local waiters … Open