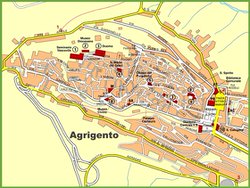 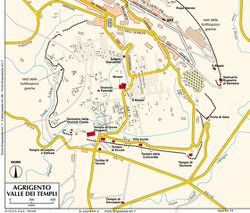 Interactive maps of hiking and biking routes around Agrigento

1. You can zoom in/out using your mouse wheel, as well as move the map of Agrigento with your mouse.
2. This interactive map presents two modes: 'Biking Routes' and 'Hiking Routes'. Use the '+' button on the map to switch between them.

This Agrigento map has two modes: 'Railway Network' and 'Landscape & Rural Map'. Use the '+' button on the map to navigate.

City tours, excursions and tickets in Agrigento and surroundings

Our guide to Agrigento

On rainy days, most tourists prefer to visit local entertainment centers. If you like computer games, a visit to Arena Games will genuinely please you. This is a computer club with a choice of the latest video games and everything needed to play them with comfort. Local youth are the main visitors to this club but adults are also not rare here. There are several high-quality sports centers in the city, and Piscina … Open

Don’t forget to visit local markets. For example, Mercato Del Venerdì is a large market that has virtually all kinds of goods for sale. Tourists can buy quality clothes by local manufacturers at a very affordable price here. Women usually like rows of stylish dresses and tunics, and men prefer stalls with colorful t-shirts. Besides clothes, it is possible to find hundreds of different ware types including … Open

Besides the legendary antique attractions, pay your attention to landmarks of the medieval period. Cattedrale di San Gerlando remains the main religious symbol of Agrigento. This gorgeous cathedral dates back to the 11th century. The church suffered much damage in the mid-13th century due to the landslide. The reconstruction works were finished only four centuries later. The cathedral changed its look and got some … Open

Among the most popular specialties of Agrigento, it is important to mention the rabbit in a special sauce and the delicious sausage with sesame seeds, dill, and chilly. Visitors can also order roasted kid goat. Beef stuffed with eggs is a dish that all connoisseurs of meat delicacies simply cannot miss. Having explored the charming city of Agrigento, don’t forget to visit the famous Valley of Temples that … Open

Maps of Sicily
The ancient grotto Necropoli di Pantalica is also located in Syracuse. In ancient times (precisely from the 13th century BC), it was where the ancestors of Sicilians lived. It is worth noting that another cave of this kind is located in the vicinity of Trapani (Grotta Mangiapane) and is employed as a museum of ancient life. Visiting such places will be interesting not only ... Open »
Maps of Palermo
Tourists will discover plenty of night entertaining facilities in Palermo with brightest dance floors and night clubs among them. One of the brightest and most buzzing night entertainments is the Berlin café being an established place of holding the brightest parties and shows engaging famous musicians. The I Candelai club is located in close vicinity to the city center. It ... Open »
Maps of Trapani
Charming beaches are not the only suitable place for relaxation in Trapani. The city is famous for its picturesque suburbs, numerous shops, colorful markets, as well as lovely restaurants and bars. Fans of walking and exploring nature landmarks, will not forget their visit to Grotte Mangiapane. This cave is located at some height, so, during an excursion in this area, travelers ... Open »
Maps of Favignana Island
Isola di Favignana is a heaven for those who love bicycle riding. You should better rent a bicycle in the capital of the island. It should be noted that the prices are higher at the rental places close to the port. However, it is obvious: some of the tourists come to the island only for a day. They don’t want to waste time looking for a cheap bicycle, so people just rent a ... Open »
OrangeSmile.com - online travel reservation expert providing reliable car rental and hotel booking services. We feature more than 25.000 destinations with 12.000 rental offices and 200.000 hotels worldwide.
Secure Server