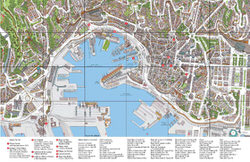 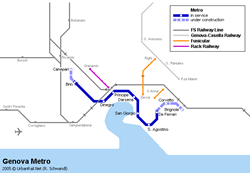 Interactive maps of hiking and biking routes around Genoa

1. You can zoom in/out using your mouse wheel, as well as move the map of Genoa with your mouse.
2. This interactive map presents two modes: 'Biking Routes' and 'Hiking Routes'. Use the '+' button on the map to switch between them.

This Genoa map has two modes: 'Railway Network' and 'Landscape & Rural Map'. Use the '+' button on the map to navigate.

Our guide to Genoa

Genoa is the capital of Liguria province, Italy. This is a port-city that has a great economic importance for whole country. La Lanterna lighthouse built in the port of Genoa is one of the most known local places of interest. Genoa is a famous center of ship building and heavy machinery, a city of universities, a large tourist and scientific center. In 2004 Genoa was praised to have the title “the cultural … Open

Genoa will certainly please fans of captivating excursions. The city is famous for its exquisite palaces, interesting museums and symbolic monuments. San Giorgio Palace has become the symbol of the city for many years. All travellers, who visit Genoa, tend to visit it. The design of the building is elegant and rigorous, and its inner decoration is truly fantastic in even slightest details. The halls of the palace are … Open

Numerous entertainment facilities of Genoa will surely help to make your rest in this city even more exciting and unforgettable. You will find a beautiful aquarium just a few steps away from the center of the city. The aquarium is considered one of the largest in Europe. This is the place where you can see the creatures of the deep sea in their diversity. Specially for visitors of the aquarium its staff prepares … Open

Restaurants of Genoa will become a real treasure for fans of Italian cuisine. Connoisseurs of other culinary traditions will also have no problems finding a suitable place to relax and enjoy their favorite dishes. Da Genio restaurant serves national cuisine and is distinguished not only by a rich selection of dishes, but also by the original decor of its halls. The place of its location is a beautiful historic … Open

Traditions and mentality of Genoa

Genoa has already become a permanent venue of numerous festivals and cultural events of the international level. Just before the Christmas holidays Genoa hosts Festival of Circus Art, which is a great holiday gift for residents and tourists. During the festival you will find engaging performances not only in numerous theaters and concert halls of the city, but also on the main streets of Genoa, as well as on its … Open

Genoa has many scenic districts that are perfect for hiking. One of the most beautiful and recognizable is the Boccadasse district. It is located along the promenade of Corso, Italy. The main features of this district are historic houses, the facades of which are painted in bright colors. Once, in these houses lived fishermen. Tourists will be interested to stroll through the narrow historical streets and look into … Open